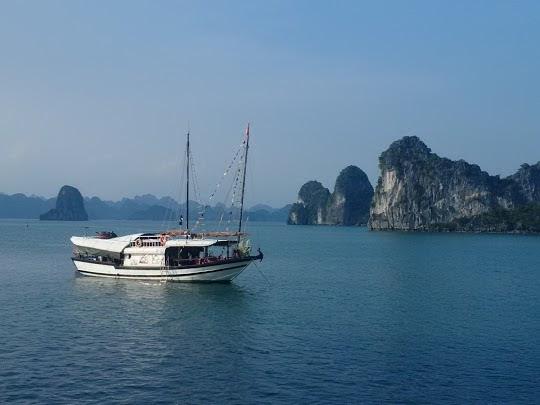 Stretching 1,650 kilometers (1,030 miles) from the Tonkin Gulf to the South China Sea, Vietnam is a land of ancient culture and staggering natural beauty, of lovely beaches and exciting cities, of enticing culture and cuisine. A visitor could spend years exploring all its fascinating places and peoples, but here's a list of the top ten, according to the website Touropia:

Up in the far northeast along the Tonkin Gulf, this beautiful bay - indeed, widely considered among the world's most beautiful - cover 334 square km (129 sq. mi.) along 120 km (75 mi.) of coastline and includes 1,969 mostly limestone islands and islets, many rising dramatically from the sea. This beautiful "rock wonder in the sky" is best enjoyed by cruising - ranging from several hours to multiple nights and small traditional junk boats to large luxury ships (you can also book kayaking and paddleboard tours). This UNESCO World Heritage Site has also been lauded by many other authorities, such as the New Open World Organization, which in 2012 named it as one of the "seven new natural wonders of the world." 
Also called the Linh Mu Pagoda, this "Pagoda of the Heavenly Lady" complex is located on Ha Khe Hill on the left bank of the Huong (Perfume) River about 5km west of Hue's city center and was built in 1601 during the rule of Nguyen Hoang, With its iconic seven-story tower, the pagoda remains important in Indochinese Buddhism and attracts many visitors both domestic and international. 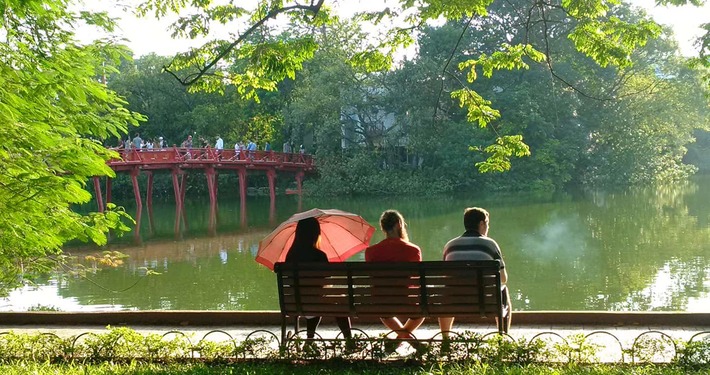 Also known as Ho Guom, this natural freshwater lake in Hanoi's historic center covers an area of ​​about 12 hectares (30 acres). its current name was bestowed upon it in the early 15th century; has inspired many artistic works; and named after the legend of Emperor Lê Loi returning a holy sword to the turtle god Kim Qui in 1428; the three-story Turtle Tower, built in 1886, stands on a small islet in the middle of a lake to commemorate Lê Loi. 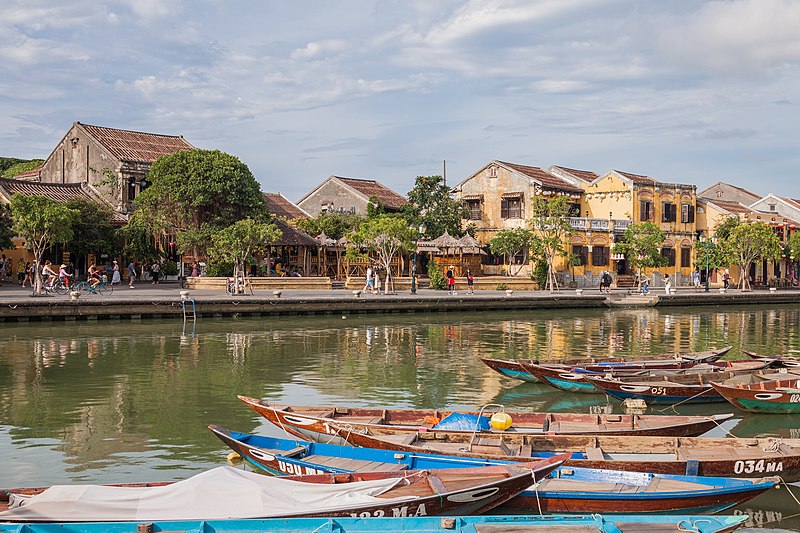 Midway along the Vietnames coast and on the northern bank of Thu Bon River, around 25km southeast of Danang, this town of around 12,000 inhabitants was in the 15th to 19th centuries a busy trading port for Japanese, Chinese, Portuguese,  and Italian merchants. Today Hoi An is a UNESCO World Heritage Site with a number of interesting museums and which preserves the ancient architectural and cultural heritage of traditional customs, beliefs, folk arts, festivals, and cuisine.  Culinary culture in Hoi An is of special note, with local delicacies here including cao lau (rice noodles, meat, greens, bean sprouts, and herbs, most commonly served with a helping of broth), mi quàng rice noodles, and "white rose cake" (actually a dumpling stuffed with minced spiced shrimp); it's also considered "the banh mi capital of Vietnam." And try to come during the monly lantern festival! 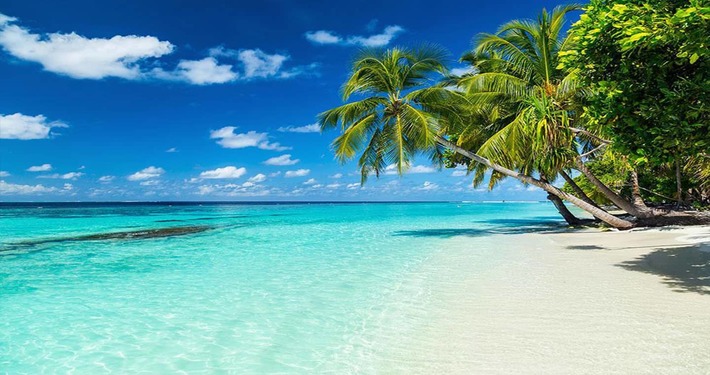 Located in the Gulf of Thailand off the coast of Cambodia, Vietnam's largest island at 589 km2 (228 sq. mi.) is home to around 107,000 people and is famous for pristine, clean beaches, rated as some of the most beautiful in the world - such as Sao Beach and Bai Truong Beach. Other draws include nature, laid back fishing villages, and nuoc cham fish sauce, said to be Vietnam's best. Also written as Sa Pa, this highland market town (pop. 82,000) in the northwest is known especially for its terraced rice paddies are spectacular, stretching from the low valley climbing up mountainsides toward the sky (voted by Travel+Leisure a few years ago one of the world’s seven most beautiful paddy rice terraces and lauded by Lonely Planet as one of the ten best places in the world for trekking. Besides trekking, other activities include mountain biking, horseback riding, and checking out the local markets packed with tribespeople from the local ethnic minorities, decked out in their traditional finery. 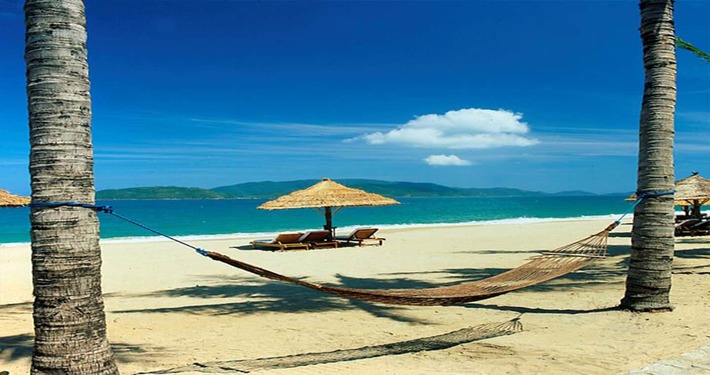 This coastal fishing town (aka Binh Thuan) in the south, just under four hour drive from Ho Chi Minh City, besides being known for its seafood, has one of Southeast Asia's most beautiful beaches. Here you'll find year-round sunny weather, clear blue sea, white sand dunes, soaring coconut palms, more than a hundred luxury resorts; and various water sports including windsurfing, sailing, and paragliding. The dunes in particular are especially scenic and iconic, and as well as on foot you can rent a motorbike to explore them. This vast delta of canals, islands, and nine river estuaries covers nearly 41,000km2 (15,600 sq. mi.) of coastal southwestern Vietnam, with a local population largely devoted to farming (especially rice and fruit orchards) and fishing. You can cycle or take a boat trip to explore the local villages and lifestyle (including family homestays), and one particularly unique feature here is the Cai Be floating market, where locals exchange goods by boat. A hour's drive northwest of Ho Chi Minh City this web of more than 200km (124 mi.) of interconnecting tunnels was begun in the late1940s during the Viet Minh fight against the French colonialists, and expanded by the Viet Cong during the Vietnam War. One level is 3 meters (nearly ten feet) deep, a second is 6m (nearly 20 ft.), and the deepest is 12m (39 ft.) down, and especially for larger-framed Westerners, the experience can be at times claustrophobic - but certainly fascinating! A city of a bit over a half million on the south central coast, Nha Trang has become one of Vietnam's top tourist hubs thanks to its mix of scenery, climate, rich history and culture, and of course beaches. Surrounded on three sides by mountains, it's home to historic temples such as Po Nagam Cham (dating back to the 8th century) and Long Som; museums like Vietnam's National Oceanographic Museum and Thap Ba hot springs; the Hon Soi salt fields; offshore islands with magical coral reefs; and attractions along the lines of the Vinpearl amusement park. Then of course there are the numerous  white sandy beaches, along 6km (nearly four mi.) of coastline on a bay regularly lauded by travel magazines and authorities as among the world's most beautiful. This is perhaps one of the country's most well-rounded destinations - truly something for everyone!