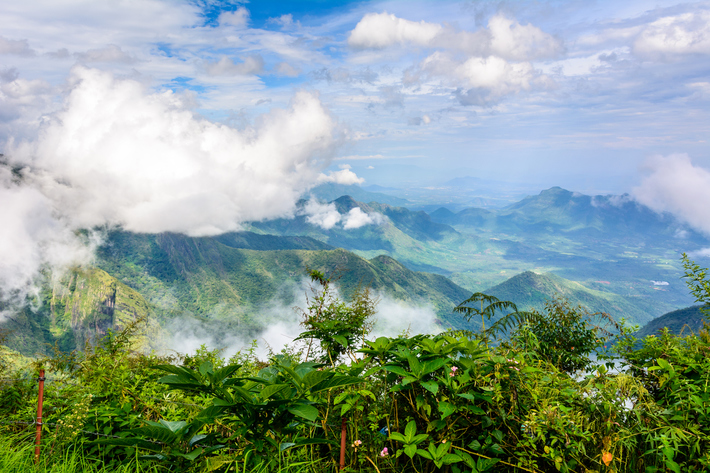 Whether for relaxing or for exploring, India have always been a delightful treat. But it's true that summers here can be challenging to deal with; in some places, sunburns, bolstering sun rays and sweat bathing can be extreme. So naturally, many holidaymakers tend to head for the hills and mountains, especially the "hill stations" founded during the British Raj in the 19th century as escapes from the sweltering lowlands. So here are 25 rewarding destinations especially for beating the heat, whether you visit independently or book tour packages:

The capital of Jammu and Kashmir offers a marvelous mix of urban history, culture, and architecture with the beauty of the surrounding mountains. Highlights include Dal Lake with its traditional shikaras (wooden boats), breathtaking mosques such as Hazratbal, Mughal gardens like Chashm-e-Shahi, Nishat Bagh, and Shalimar Bagh; the Tulip Garden; Shankracharya Temple; and the hill stations Pahalgam and Gulmarg, and Sonmarg.

Known as a haven for lovers and honeymooners' paradise, Manali is one of India's most beloved hill stations, up in the Himalayas of the northern state Himachal Pradesh. In winter its popular for skiing and snowboarding, and in summer it's a lively town offering cultural attractions as well as ecotourism and adventure options in the gorgeous green mountains all around. Among  spots not to miss is Manali's main street, Mall Road; Manu and Hidimba Devi Temples; Manali Wildlife Sanctuary; the Solang Valley; Rohtang Pass, the Hampta Pass and Deo Tibba treks; Arjun Café on the road to Naggar; and the nearby towns of Kullu and Manikaran,

Spread out along a 12-kilometer ridge and dubbed "the Queen of the Hills," this state's capital was once the summer capital of British India and remains a top favorite of honeymooners and summer travelers. You won't want to miss the colonial-era Gaiety Theatre and palatial Viceregal Lodge; Jakhu Temple; Mall Road shopping; the Himachal State Museum; the Kalka-Shimla "toy train," a narrow-gauge tourist railroad;  and nearby villages and towns like Chail, Kufri, and Mashobra.

North of Shimla and east of Manali, Spiti is known for its breathtaking landscapes, ancient Buddhist monasteries (including three of the world's oldest, Ki, Komic, and Tabo), and adventurous trekking tails amidst the soaring Himalayas, and mix of Indian and Tibetan cultures. For ecotourism, visit the Kibber Wildlife Sanctuary and Tara.Pin Valley National Park (home to the snow leopard). Go rafting in the Spiti River, trek up to Chandra Taal Lake, and visit hill towns like Chitkul, Mashobra, and Narkanda.

Experience a mystical region in northeast India that not many have explored. Bordering Tibet and once an independent Buddhist kingdom, this tiny state surrounded by Himalayan peaks is a land of stunning natural beauty, fascinating monasteries, and quaint villages, appealing to adventurous travelers. Highlights include mountain trekking; rafting the Teesta River; Enchey, Lachung, and Rumtek monasteries; Banjhakri Falls; Yumthang, the "valley of flowers"; and Cholamu, Gurudongmar and Tsomgo Lakes.

In Uttarakhand state next door to Himachal Pradesh, on the Ganges River at the foothills of the Himalayas in Uttarakhand state, Rishikesh is known as an ancient city holy to Hindus and in addition to its temples and holy places it's also dubbed "the yoga capital of the world," a magnet for seekers of inner peace. Furthermore, thanks to natural surroundings it has also become a national hub for backpackers, hikers, mountain bikers, and whitewater rafters in recent years. Besides the above, other highlights include Raghunathji and Swarg Niwas temples; the Germany Bakery; and many tea shops and vegetarian eateries (alcohol and meat eating are forbidden here), such as the famous Chotiwala restaurant.

Also known as a "mini Kashmir," this town in the east of the state near the Nepal border, is a another wonderful spot place to indulge in high altitude nature and adventure (including trekking and hang gliding). Among its top attractions are Askot Wildlife Sanctuary; Arjuneshwar, Dhwaj and Mostamanu Temples; Kafni and Ralam glaciers; and the nearby "temple town" of Gangolihat.

Amid lovely scenery of the Kangra Valley some 2½ hours south of Dalhousie, for the last 60 years Dharamshala has had a marked Tibetan and Buddhist flavor, thanks to the establishment in suburb Mcleodganj (dubbed "Little Lhasa") of Tibet's government in exile and residence of the Dalai Lama. As such, it's home to the Tibetan Museum as well as numerous Buddhist temples, monasteries, and other sites, including Tsuglag Khang, the temple of the Dalai. Dharamshala is also known for its superb kangra green tea, and in addition to many tea gardens around town, visitors can also tour several tea estates. Trekking in the surrounding area is a popular activity, and 32 kilometers out of town another fascinating site is Masroor Rock Cut Temple complex, 15 Hindu temples hewn from the rock and dating back to the 8th century.

Surrounded by evergreen and oak forests, some 2,800 meters up in the Himalayas, Auli is best known for winter sports, but when the weather warms up and nature comes into bloom, it's also popular for its scenery and adventure activities such as hiking, rock climbing, rapelling. There's also a ropeway (cable car) which affords spectacular views.

This hill station (pop. 41,400) a bit farther from Dehradun is known as "India's lake district," set in a breathtaking valley and taking its name from one of its main attractions, Naini Lake. Other attractions include Naini Peak and another hill, Snow View Point; Naina Devi temple; and a high-altitude zoo specializing in sometimes rate Himalayan species.And around 2½ hours away Jim Corbett National Park is known for its wildlife (especially Bengal tigers). Definitely among the best destinations to spend summer holidays in India.

Just an hour from Ooty, Coonoor is also a verdant oasis of tea plantations and gardens such as Sim's botanical gardens. It's also known for its shopping, particularly its quaint little shops selling embroidered shawls, Toda jewellery handicrafts, and antiques.

Nine hours south of Ooty and four from state capital Madurai, nestled 7,200 feet up amidst the Palani Hills of the Western Ghats, lakeside "Kodai" (also pictured at top) is known for its wildflowers and its trees, especially dahlias, cypresses, eucalyptus, acacias, pear, rhododendrons, and magnolias. Musts include activities on its star-shaped Kodai Lake and enjoying the views at Thalaiyar and Bear Shola Falls, Pillar Rocks, and Devil's Kitchen gorge.

Seven hours south of Mumbai, Mahabeleshwar was also developed as a hill station, it features amazing mountain and valley views as well as outdoor activities such as strawberry picking; hiking, biking and horseback riding in the green hills and boating on Venna Lake. It's also the source of the Krishna River and home to significant history, dating back to the 13th century, leaving it with a legacy of a number of Hindu temples and shrines along with Pratapgad Fort.

Quite a bit larger than many other Indian hill stations and reknowned for its eponymous tea, Darjeeling nestles in the lap of the soaring Kanchan Junga mountains (lesser Himalayas), particularly Mount Kanchendzonga. The peaceful ambiance is accentuated by the city's pretty Victorian as well as neo-Tudor and Gothic architecture. Among other things, besides visiting tea plantations holidaymakers can take a ride on the 1880s-vintage "toy train" mountain railway; visit Buddhist monasteries and the appealing local zoo; and explore the food and culture of the various Himalayan ethnic groups living in the area.

Another of the most loved summer holiday destinations in India Wayanad is appreciated above all because of its lush flora and rich fauna. It's also rich in tea, coffee, and spice plantations, growing cardamom and pepper. In addition to them, top local highlights:Chembra Peak, Banasura Sugar Dam, Meenmuthy Waterfalls.

A scenic beauty which will bring serenity to your very senses, exquisite tea and coffee plantations, beautifully placed resorts and lush greens, Munnar is a famous adventure summer holiday destination. Fishing, Boating, Mountaineering, Tea Museum are the magnificent attractions of the hill station.

With a population of around 143,000, the capital of Meghalaya state, on a plateau in northeast India bordering parts of Bangladesh, is known for its pleasant climate and verdant environment, leading it to be dubbed "the Scotland of India." Highlights include the Shillng Peak with its sumptuous views; the Police Bazar (the city's main market); Beadon, Elephant, and Sweet Falls; Umiam and Wards Lakes; and several museums, devoted to regional ethnic groups, butterflies, and state history.

About 4½ hours from Udaipur, Mount Abu is the only hill station in western India's Rajasthan state, the refuge par excellence from the blistering summer heat of the desert plains. It also has a long history, and is a place of pilgrimage for Hindus and Jains, with temples such as Achaleshwar Mahadev, Adhar Devi, Dilwara, Durga Ambika Mata, and Shri Raghunathji, . Other attractions include 14th-century Achalgarh Fort, Nakki Lake, and Mount Abu Wildlife Sanctuary.

These days officially known as Kodagu and also vying for title of "the Scotland of India," one of India's top hill station destinations , including its capital Madikeri, is up amidst the eastern valleys of the Western Ghats and offers some of the country's most luxurious holidays, with hiking and just plain relaxation high on the list of draws. Some specific spots to keep in mind are the Nisargadhama delta; Abbey and Iruppu Falls; Dubare elephant camp; Nagarhole National Park; and temples such as Bhagamandala, Talakaveri, and the Tibetan Buddhist Golden Temple.

Last but definitely not least, we descend from the cool hills and mountains down into a tropical archipelago out in the Bay of Bengal, with glorious beaches, rich marine life, luxury hotels, and a raft of outdoor activities including snorkeling, diving, and kayaking. Capital Port Blair has some interesting attractions, too, including the colonial-era Cellular Jail, the Forest Museum, and the Anthropological Museums. Other notables include Mahatma Gandhi Marine National Park; the village of Indira Point; and islands such as Neil, Havelock, Katchal, and Car Nicobar.