I met the Argentine Zapp Family - made up of Herman, Candelaria and their four children, who for 17 years traveled around the world in a vintage car - in Barcelona, where they'd come to kick off their travel through Spain for several months as part of their journey through Europe, where they planned to put an end to their adventure by the end of 2017.

The family planned to travel to Spain until spring before embarking on a trip to the Netherlands, the United Kingdom, Italy and Greece, the last stops on a tour that has passed through the five continents. Herman and Candelaria left Argentina for the first time to travel the distance between Buenos Aires and Alaska in six months, but what should've been a half-year adventure was "17 years and four children," Herman explained in statements to the Spanish news agency Efe, recognizing that during this time they could not "stop traveling".

The family's traveling companion has been during this time a vintage car manufactured in 1928 by the American carmaker Graham-Paige, which went out of business in 1940. It took them all over the American continent first, then through Australia and New Zealand , through Asian lands from Japan to India, Africa from north to south and finally Europe, where they entered through Turkey. 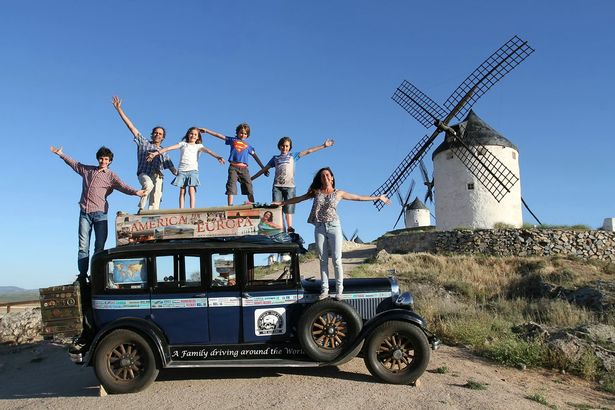 Herman says that finding spare parts for his old car is not as difficult as it might seem, and explains that, for example, ​​they were able to repair a wheel thanks to the owner of a collection of vintage cars from the Barcelona province city of Granollers, which rents them out for weddings.

Among other things, the vehicle carries a box full of books for children in the back seat, as well as a trunk containing games, kitchen utensils, and the book Spark Your Dream, written by Herman and Candelaria, the sale of which is currently the source of the family's income.

Herman and Candelaria met when they were 14 years old , and they promised themselves that, when they got married, they would embark on the trip, a promise that they have more than fulfilled: "if I had thought about it before leaving, I would not leave my house", she acknowledged. mother to Efe. "We had three dreams,” recalls Candelaria, "living in the countryside, having a large family and traveling a lot," and she is happy to have met at least two of them, although she admits that she "never" imagined "taking children on the trip."

The four children of The Zapp, authentic globetrotters who have been traveling all their lives, have been born in four different countries: the United States, Canada, Australia and only one was born in Argentina , where every three years they return to stay three months.

The kids study in the morning, a "little routine" within the journey for Candelaria, who is responsible for homeschooling them from a distance and preparing them for the exams they do every two months.

"We took children to NASA to see a space ship, " says Candelaria, who believes that her children learn a lot in a "practical" way during the trip, about "different religions" and cultures, for example, thanks to their knowledge of the people of the different homes where they have stayed. The Zapp family has traveled, mostly staying in houses of people who welcomed them unselfishly, as now in Barcelona, ​​and Candelaria says that the people they have met in the more than 2,500 houses where they have slept is "the most beautiful" of the trip.

"When we left Argentina they told us to be careful," the father recalls, "but they never told us that there are always going to be people who will be there at the right time." Herman says they have only suffered an attempted robbery, in Mozambique, when they took his computer, although the next day the townspeople helped them recover it.

The Zapp family decided to put an end to the long journey by the end of 2017 and return to their home in Argentina because the parents want "our children have both lifestyles," according to Candelaria, so they can then choose for them same how they prefer to live.

Candelaria knew that "it will cost" her to change her life, but she wants to enjoy it and take the opportunity to write more books about her adventures, "a way that the trip does not end".

"I really like to get to new places," exclaims Pampa, the oldest son at age 14, "but I know that I will also like to make a lot of friends " and see their relatives. "They grew up in a dream and saw how that dream was fulfilled," Herman says, pleased, hoping that his example will make his children "not afraid to go after their own dreams."