Yokohama Is Positioning Itself as Japan's Premier Seaport Destination 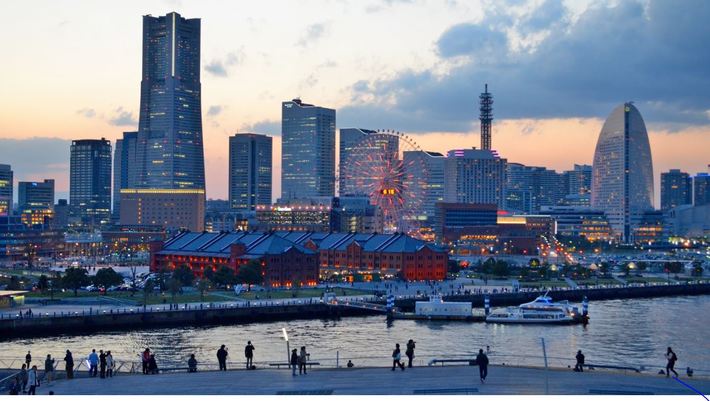 Yokohama, with a population of 3.7 million, is the second largest city in Japan after Tokyo, but this is often overlooked due to its proximity to Tokyo.  In fact, when people quote the population of Tokyo at 38 million, they are actually talking about "Greater Metropolitan Tokyo," which includes Yokohama! Yokohama itself has so much to offer, with so much going on, especially as a cruise hub, because so many Japan cruises start and end there. Two New Cruise Piers to Open in Yokohama in 2019

Cruising is becoming an ever growing and ever more important segment of Japan's tourism industry. In 2019, 190 cruise ships will arrive in Yokohama, 90 of them foreign flagged, a 25-percent increase over 2018.  Japan is the number-one cruise destination in Asia, and Yokohama is the most frequently visited Japanese port for English-speaking passengers.

Part of this is due to demand and part of it is a result of the new piers coming online meeting this demand.  Two cruise piers -- Daikoku and Shinko -- will open in Yokohama in April and November 2019 respectively. While Daikoku will receive mostly freight carrying ships, it will also be open for some larger cruise ships, such as the Queen Elizabeth II. With the opening of these two piers, in addition to the current Osanbashi International Passenger Terminal, Yokohama port will be the largest in Japan in terms of capacity, able to accommodate seven ships at one time. In fact, in terms of "super large ships," 2019 arrivals will be eleven times greater than 2018. 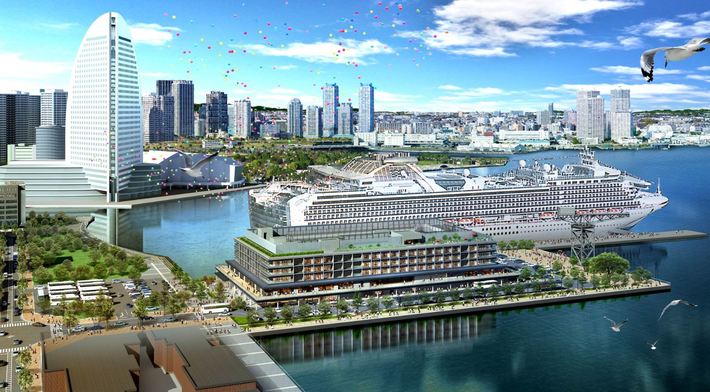 As mentioned above, the five-story Shinko Pier, also known as "Yokohama Pier 9," is currently scheduled to open in November 2019. Occupying an area of 30,290 square meters on a site footprint of 17,700 square meters, this new state-of-the-art port will be dedicated exclusively to passenger cruise ships.

However, in addition to the Passenger Facilities Terminal itself, the complex will include dining, entertainment, and a hotel. The first floor will house the CIQ (Customs, Immigration & Quarantine) but will also feature "quick service" -- convenience stores, fast food, a coffee chain, a ramen shop, and a food court. Moving up, the mezzanine level will sport a craft beer restaurant. Then, on second floor terrace, facing out to the sea, hungry patrons will be able to choose from a pizzeria, a wine bar or a hamburger spot. Floor two will also debut a local Yokohama chocolate shop and locavore eateries featuring culinary workshops.

The land adjacent to the new Shinko Pier terminal will be developed into Hammerhead Park and Promenade. This park will incorporate the historic Shinko Pier Hammerhead Crane (above). This was Yokohama's first quay crane, installed in 1914. The plan is for it to become a second symbol of the city, akin to the nostalgic Red Brick Warehouse.

The pier flagship will be a new five-star hotel to be operated by the Yokohama Grand Intercontinental. The hotel entrance will be on floor one, with the second floor showcasing both the hotel restaurant and lobby.  Shinko's top three floors (3, 4 & 5) will be devoted to luxury guest rooms, all over 45 square meters in size. Cruise ship passengers, spending a pre-night at the port hotel, will be able to check-in for their cruise at the hotel and be escorted on board. Cruise passengers can travel door-to-door between the hotel and the airport with their large suitcases using the airport limousine service.

Carnival Corporation, which includes the Princess and Costa brands active in Japan, has preferential use rights and will host over 80 vessels annually, but other vessels will dock one or two times in spot arrivals. Other cruise lines that will dock at Shinko include: Royal Caribbean, Windstar, MSC, Azamara, and NCL. A full ship docking schedule, subject to change, is here; 400,000 cruise ship passengers are expected annually.

April 27, 2019 will be a Big Day for Cruise Ship Arrivals at the Port of Yokohama

On April 27, 2019 four large cruise ships will dock in Yokohama on this same day, bringing as many as 10,000 passengers totaled. The following ships will dock at three piers:

This abundance of visitors will be quite a sight itself, but more than looking at themselves, they will be able to look beyond – over the Bay at the docked ships, as also in April 2019, the Skywalk section of the Bay Bridge will reopen during super large ship dockings at Daikoku pier 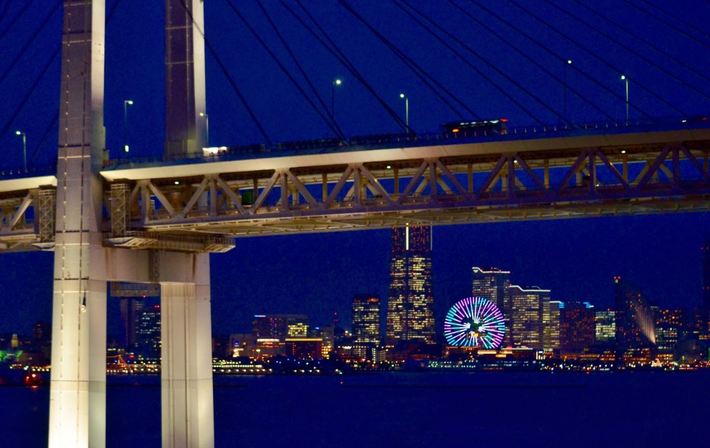 Stay in a Yokohama Hotel Before or After Your Cruise!

If you have ever taken a cruise that lists "Tokyo" on its itinerary, unless your ship was very small, you almost certainly docked, not in Tokyo, but in the Port of Yokohama. Sadly, that is when unknowing travelers arrive at Narita or Haneda Airport a day before their cruise and immediately take a very expensive taxi ride into Tokyo with all their luggage. Then, the next day they take another expensive taxi ride to Yokohama!  They ignore Yokohama, which is not only more convenient, it is a worthy city in and of itself.  Yokohama port is only 20 minutes to Haneda Airport by car or an easy hotel to airport door-to-door limousine bus. The limousine bus is also inexpensive and convenient transportation to ...!  If you stay at a hotel in the Minato Mirai area, transferring between your hotel and the port for embarkation and/or disembarkation with all your luggage is just a short taxi ride.

The APA Hotel & Resort Yokohama Bay Tower, slated to open on September 20, 2019, will be a 35-story tower with 2,311 guest rooms! It will be the largest one-building hotel in Japan! It will be located in the Minato Mirai area and will include: a spa and wellness center, featuring 10 ofuro (communal hot spring baths), a rotenburo (outdoor bath), and a grand swimming pool.  Standard rates on an 11-meter squared double room start at $200 per night, service fee and tax inclusive.  Non-smoking rooms available.

So Much to Do Around the Port Area!

• Shopping and dining at independent spaces as well as complexes such as: 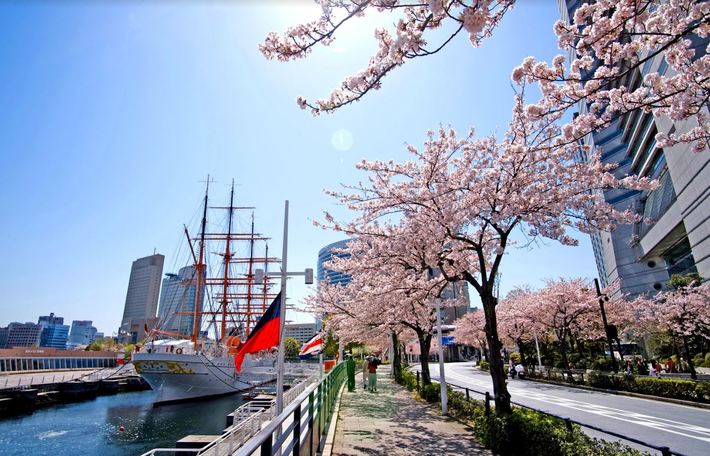 • Parks and gardens - such as Yamashita Park and just fifteen minutes by taxi to the must see Sankeien Garden;

For More Information on Yokohama, Japan: