Theme parks are a natural fit for Halloween festivities: On a certain level, you might say it's always a Halloween party at theme parks - plus, most of the rides are already designed to scare the living daylights out of you. In October (and sometimes even earlier), some of theme parks have gently scary daytime Halloween events for kids as well as night terrors for teens and adults. Here's a (non-exhaustive) sampling from across the world (and keep in mind, for planning purposes, than this year's dates will be similar for 2014): 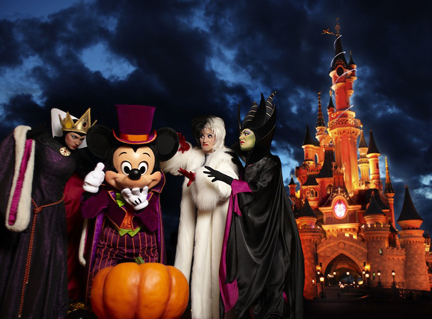 The Magic Kingdom at Walt Disney World and at and Disneyland both have a family-friendly after-hours event called "Mickey's Not-So-Scary Halloween Party." These parties feature trick-or-treating, a special Halloween fireworks display, and witches who are, as advertised, not too scary. At Walt Disney World this year September 10 through November 1; at Disneyland October 11, 15, 18, 21, 23, 25, 28, 30, and 31.

Like the American Disney parks, Disneyland Paris offers a Mickey's Not-So-Scary Halloween Party designed not to give the kids nightmares (October 28, from 8 pm to 11 pm). This park, however, also adds a Terrorific Night during which dreadful creatures, gruesome characters, and artists from beyond the grave join forces to give visitors a hellish scare. And throughout October, everyone can dress up and trick-or-treat at Mickey’s Halloween Treat in the Street. Instead of photo ops with Disney princesses and such, you can meet and take photos with Disney villains. Muah-ha-ha!!  October 11-31.

This theme park in Ontario has a not-too-spooky Camp Spooky 10 am to 5 pm Saturdays and Sundays in October. Little ones can enjoy mazes, a costume parade, and Charlie Brown’s Trick or Treat Show. At the nighttime Halloween Haunt (below), ten scary mazes include Club of Blood and the new Terror of London. Beware the terrifying creatures that haunt the park along with three frightening shows. Weekends October 6-31. 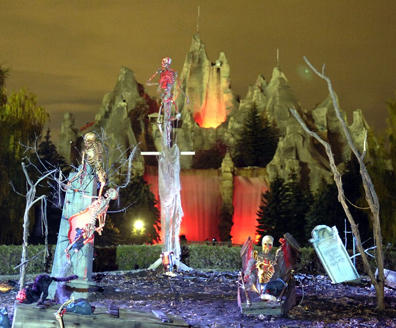 Universal Studios, another company with Orlando and California theme parks, has added Halloween Horror Nights (below) to Singapore, its third, newest location. Universal promises you will "feel what it's like to be trapped in a horror film as you run for you life in a Carn-EVIL of crazed clowns. Step into the haunted Peranakan house where you face the "Vengeance of the Matriarch" as the demented Nyonya stirs her bubbling brew of black magic. Mutated zombies roam around in a post-Apocalyptic rage. Not recommended for children under the age of 13. FYI, you aren't part of the attraction here -- costumes and masks are not allowed. Weekends and select weekdays Orlando Sept. 2-Nov. 2 in Orlando, Los Angeles Sept. 20-Nov. 2, Singapore Oct. 11-12, 18-19, 25-26, plus Oct. 31-Nov. 3. 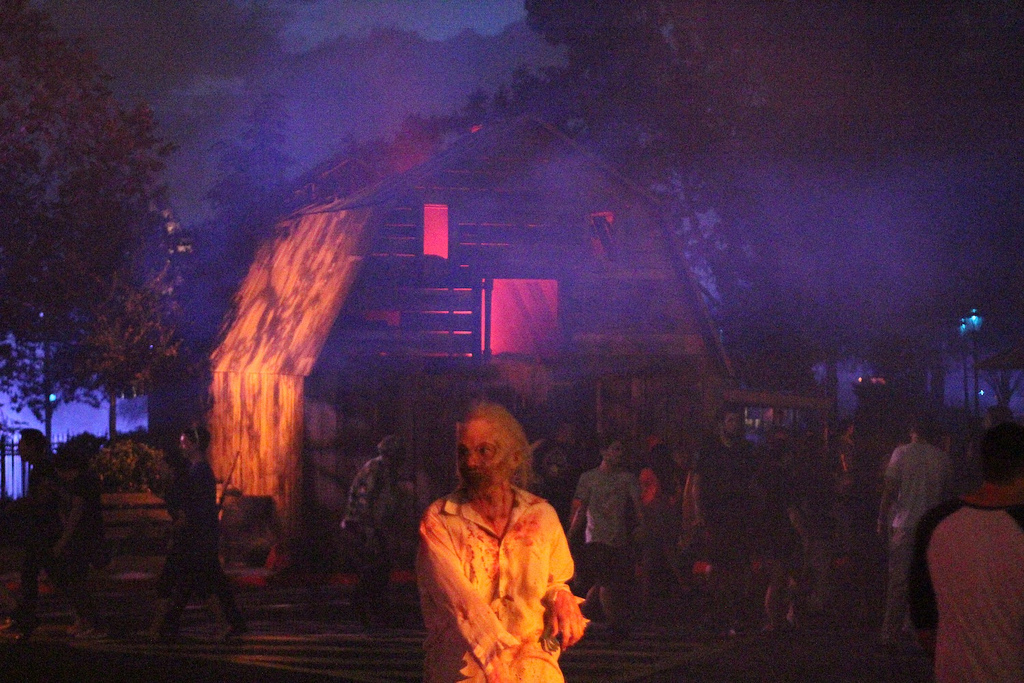 Both Busch Gardens original park near Tampa and its offshoot right outside Colonial Williamsburg have a daytime, family-friendly "Sesame Street Forest of Fun" with costumed Sesame Street characters and The Count Von Count Countdown to Halloween show (below). Starting at 6 pm, the park transforms itself into Howl-O-Scream for teens and adults. Ghouls rule, with haunted houses, zombies, and werewolves ramping up the fear factor. Friday through Sunday September through October 30. On weekend nights in October, Hersheypark decorates and renames its thrill rides “roller ghosters”; Even the friendly Carrousel becomes "Night Mares." The nighttime festivities are for all ages, but only take little kids who aren’t easily frightened. Grownups may wear costumes, but be sensible: no flowing robes, please, because they can get you in trouble on the rides. For the ultimate in trick-or-treating, take children under 12 to the source, the adjacent Hershey’s Chocolate World. Friday through Sunday October 18-27, plus Nov. 1-3.