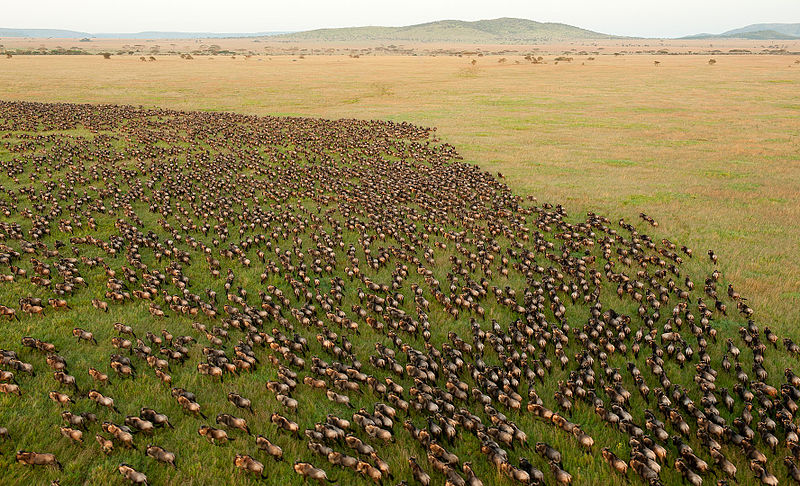 Rated among the world’s seven wonders, each year millions of wildebeest and zebras migrate clockwise from Tanzania's Serengeti to Kenya's Masai Mara, mating along the way. One thing with the wildebeest migration, you have to get your timing perfectly right; there is no point to come for wildebeest migration and end up gazing over the resident wildebeest and zebras. You need to know exactly where and when to visit, these is where my month by month guide comes in handy!

January  You will find the herds in Tanzania's Serengeti, moving towards the northeast from the south towards the southern Serengeti, Ngorongoro area, and Ndutu. This is the period when they give birth, so prepare to see lots of small babies around these time.

February  There is a lot of food to graze in the Ndutu, Ngorongoro, and the southern Serengeti, so the herds will remain in the south.

March  You will still see the herds in the south but there's less grass; the last bunch of mummies will be having their babies and you will see that they are starting to prepare for the next move.

April  These time let it find you in the southern Serengeti- these period wildebeest start their northward journey, with lots of them actually in front and leading in the western and central Serengeti.

May  The herds are on the go, with huge columns up to 50 kilometers in length as the wildebeest migrate to the central and western Serengeti.

June  Migration continues is in the central and western Serengeti, as they gather for the toughest journey ahead.

July   I will highly advise early booking, these is the big moment everybody is waiting for: the river crossing. The wildebeest are now in the western Serengeti and Grumeti and are now peeping at the brown river they are supposed to cross. Why peeping? Crocodiles of course. From the start you will have realized that the zebras have been leading, but at these stage of crossing the river, they will lay back and let the wildebeest starts the crossing. Why? Because they are smart!

August  The lucky survivors who have made it across the river are here celebrating by grazing in Northern Serengeti as they begin to cross to Kenya’s Masai Mara. The irony here is, the wildebeest don’t need s passport to cross the border while you do.

September  This period most of the herds actually breaks into smaller groups, half of them remain in Northern Serengeti while the rest start arriving in Kenya's Masai Mara.

October Your best place to be is in Masai Mara, way smaller than the famous Serengeti, with lots of visitors during this month.

November  Short rains have started pouring, wildebeest are now preparing to depart the Masai Mara back to to Serengeti.

December  With lots of fresh grazing, wildebeest spread in the northeastern and southern Serengeti. Babies are being born again - butt it’s also the time also for predators to feast, as it is well referred to in the cartoon “The Lion Guard” these is the Circle of Life,