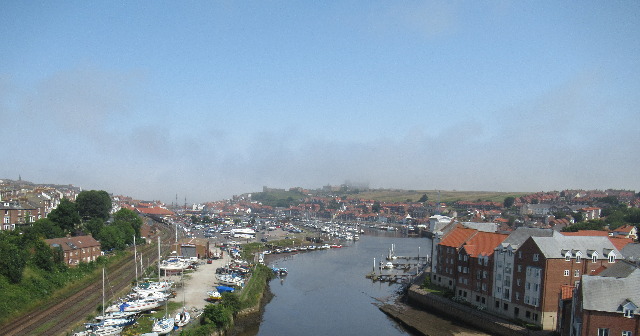 It rains rather a lot in Britain. Even the Tourist Board aren’t unwise enough to pretend it doesn’t. Most of our seaside resorts have, therefore, been spoilt by over-development to ‘cater for’ visitors when it’s too cold or wet for the beach.

Whitby’s different. Certainly, there are amusement arcades, fortune-tellers and gift-shops in plenty. But, since Whitby is still a working fishing port, it hasn’t been taken over completely.

Anyway, many years ago, I was in Whitby researching for an article about explorer Captain James Cook. So, the weather didn’t really matter.  I’d brought some no-messing mountaineering waterproofs with me, and faced the rain and the howling wind, and gained some amusement from the few tourists struggling with their cheap plastic ponchos.

But, I hoped it would brighten later, because I also wanted some pictures of Whitby Abbey for a calendar project. I didn’t get them on that occasion; I had to wait several years for the opportunity to revisit. But. I walked in the footsteps of Whitby’s fictional villain, as well as its real hero! 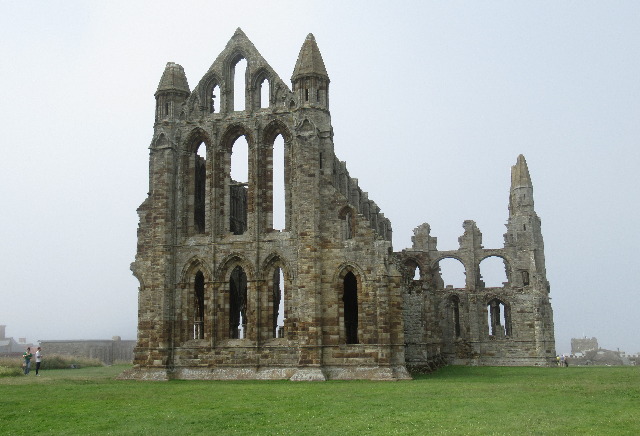 Whitby Harbour is a narrow river-mouth. On each side, a red cliff towers, and to its slopes, the old town clings. The West Cliff belongs to Captain James Cook. His statue stands looking out to sea, atop the cliff. As a young man, he lodged with, and worked for a merchant named John Walker, in Grape Lane. Walker’s house still stands, and is now a museum, devoted to the achievements of his protégé.

Cook’s ships were also built in Whitby; all having originally been collier barks. His ships, Endeavour and Resolution, and consorts which sailed with him on his second and third voyages, Discovery and Adventure. A non-sea-going replica of Endeavour can be found in Whitby Harbour, and it’s open to visitors. 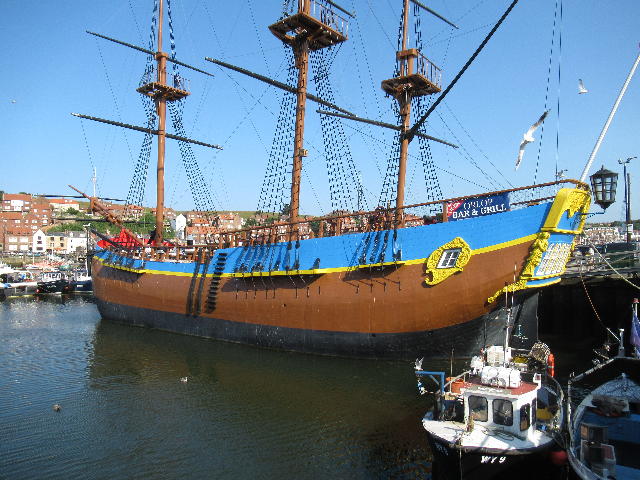 It was probably from the West Cliff that, on 31st October, 1885, Irish novelist Bram Stoker witnessed the cargo ship ‘Dimitry’ out of Narva, run aground on Tate Hill Sands. When, some years later, he wrote Dracula, he had the Count arrive in the ‘Demeter’, from Varna, steered by the dead hand of her Captain.

The East Cliff is ‘Dracula Country’, but it doesn’t belong exclusively to him. On top of the cliff stand the ruins of 7th Century Whitby Abbey, where a simple herd-boy once sang to, and captivated the Abbess Hilda. Hilda went on to become a Saint; the Song of Caedmon is said to be the pioneer of English religious music.

‘Caedmon’s Trod’ is the name given to one of the two sets of steps leading up to theAbbey from the old town. Curiously, though, the commemorative Cross of Caedmon stands at the top of the other steps, called the Abbey Steps, or, more usually, simply the 199 steps. Don’t ask; I didn’t count them! 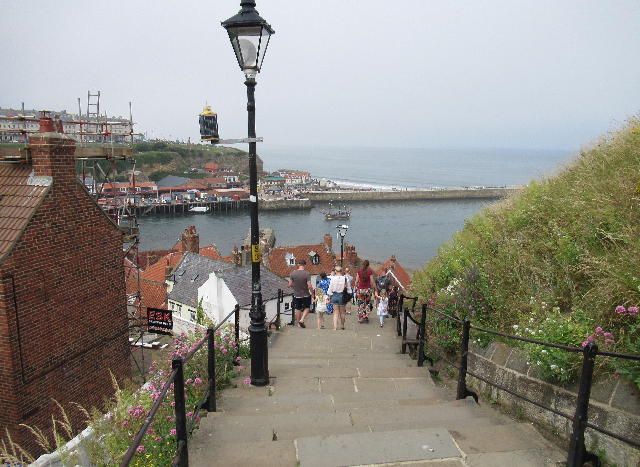 Both sets are good for pictures looking across the red-tiled roofs of old Whitby. The sun shows the tiles to their best advantage ... but, wind and rain ensures that the steps aren’t too crowded! You pays your money ... or, you gets up early, or you comes in winter!