A Food Journey Through (Western) Slovenia 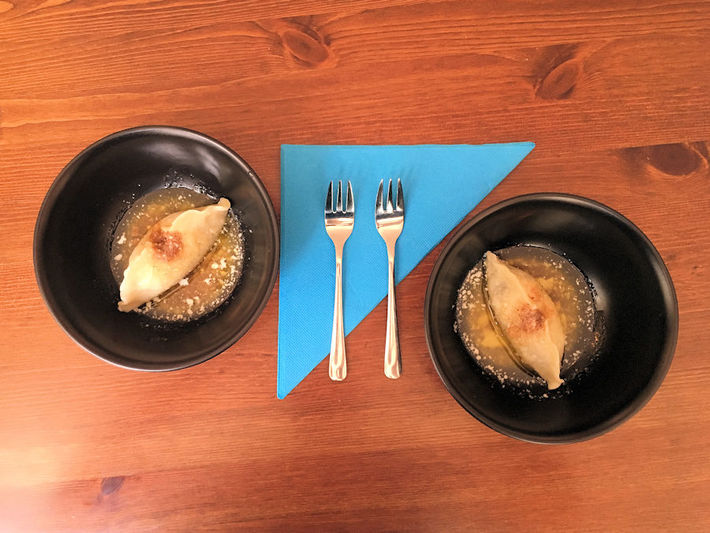 They say great things come in small packages, and that is certainly true for the Balkan country Slovenia. Considering it’s such a small country (thirteen times smaller than New Zealand), there is a surprising variety of traditional Slovenian dishes you can sample here. According to our walking tour guide in Ljubljana, Slovenia has seven traditional regions, and each region has its own (take on Slovenian) cuisine.

If you’re a foodie you could spend a long time travelling around Slovenia and sampling all the delicious dishes the different regions have to offer. Our article though will concentrate on western Slovenia. Why? Simply because this is the area we visited and where we ate our way around – literally.

Part of the Austro-Hungarian empire (until World War I) and Italy (which annexed western Slovenia after the war), you can find Austrian, Hungarian and Italian influences in Slovenian cuisine. While it was also part of the former (the Kingdom and later the Socialist Federal Republic of) Yugoslavia, Slovenian cuisine is distinctly different from the typical Balkan fare of ćevapčići and burek that its southern neighbours are renowned for (though you can get them in Slovenia as well). 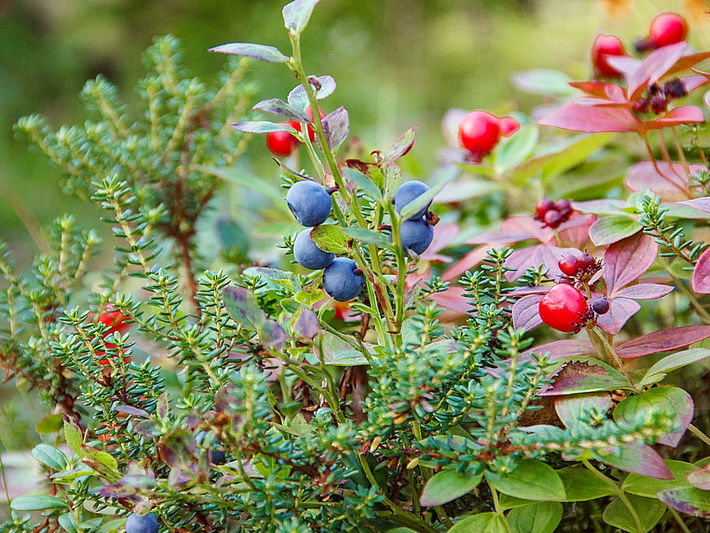 What Foods Should You Sample When Travelling Around Western Slovenia?

Most people visiting Slovenia will arrive in its capital Ljubljana. So, let’s start here. It’s hard to pin down dishes that originated in/around the Slovenian capital but the two we would suggest you try when in Ljubljana are štruklji and potica.

Štruklji (Slovenian dumplings) come in all variations – savoury or sweet; round like a ball or like slices of rolled dough; on its own or as a side dish. And each region (or even town/village) has its own version yet again. A great place to sample (quite) a few different varieties is Moji Štruklji Slovenije (My Dumplings of Slovenia) in Ljubljana.

Potica on the other hand is a traditional Slovenian holiday cake. It’s not too sweet and reminded me a bit of stollen, a holiday cake my grandmother used to make. Obviously, there are as many recipes as there are Slovenian (grand)mothers but if you want to make one at home, here is one recipe to check out. Gorenjska (Upper Carniola) is the area northwest of Ljubljana, known for picturesque Lake Bled and the winter sports centres Kranjska Gora and Planica. If you (only) make it to Bled, make sure you stop at the Park Hotel for Bled’s signature dessert Blejska kremšnita (cream cake). On the savoury side, while Austrians argue that the Kranjska klobasa (Carniolan sausage) is Austrian, the region it originated from lies in present-day Slovenia and is a definite MUST-TRY when you visit the region. Another sausage you might want to try is Gorenjska’s version of krvavica (blood sausage) - it might sound gross to some to eat sausages made from boiled pig’s blood, but it’s actually quite delicious. If you're vegetarian, don't worry: Slovenia also has plenty of non-meat dishes. For example, you might like Gorenjski krapi (buckwheat ravioli); we tried them with a delicious mushroom sauce during a roadside stop along the serpentines leading up to Vršič Pass. 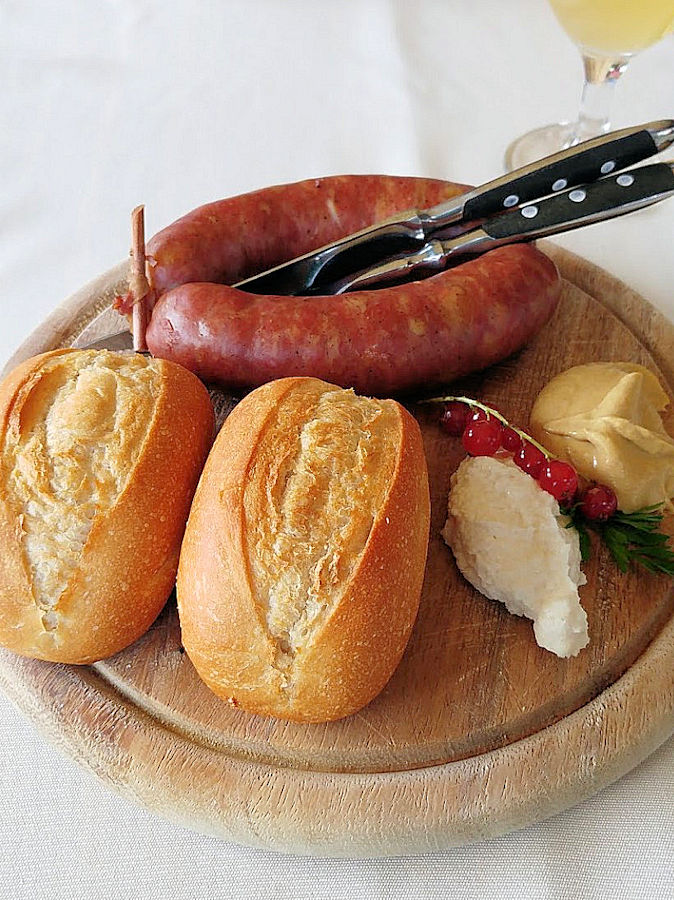 Primorska (Slovene Littoral) is the westernmost region of Slovenia. Bordering Italy and under Italian control between WWI and the creation of Slovenia as part of Yugoslavia after WWII, it might be no surprise that this region has its own varieties of pasta and prosciutto. Make sure you try Kraški pršut (ham from the south-western Slovenian Karst region, cured without heat or smoke) from niche company Slovenia Food, and bleki (square pasta) – with a delicious sauce or in a soup – when you visit the region.

A here's a question: Did you know that Slovenia is home to more than 500 brown bears? The dense forests of the country make a great habitat for them bears (as well as for wolves and lynx). The reason I mention it is because while you can observe brown bears in their natural habitat, especially in Southern Slovenia (the regions of Notranjska and Dolenjska) you can also sample bear on a plate: Primorska is known for its game dishes, including venison, divjega prašiča (a wild boar dish we tried in Kobarid), and bear, which is hunted under strict regulations to keep their numbers under control.

How Do I Recognise Traditional Slovenian Cuisine in a Restaurant?

The most authentic Slovenian restaurants proudly use the markings of local heritage: "Taste Ljubljana", "Taste Central Slovenia", and "Gostilna Slovenija" (top-quality regional dishes). Kranj has its sausage, Bled has its cream cake… and Tolmin has its own version of frika, ia hearty shepherds' dish which looks like a Spanish tortilla. Tolminska frika, however, tastes very different, being made with 1/3 potatoes and 2/3 cheese - you can take a guess which flavour overweighs. And in the Soča Valley, you can’shouldn't miss trying Kobariški štruklji, the town of Kobarid’s very own, and delicious, dumpling dessert, made with walnuts and raisins; we tried it at a wonderful restaurant called Hiša Polonka. If you want to sample as many (different) štrukljis as your stomach can handle, head, as mentioned above, to My Dumplings Of Slovenia. For a low-cost bistro experience, try Hitra Žlica and/or Orient Express. We stumbled upon the latter by chance, following some office workers as they headed out for lunch. A bit hidden in the basement of an office building, it serves cheap, (almost) home-cooked meals, and the staff are super friendly. If you happen to be in town on a Friday, check out Open Kitchen next to the cathedral, where some 40-plus local restaurants offer their dishes at discounted prices (the kitchen isn't open when it rains, though). If you’ve still got room for dessert after all this tasting, head to Gelateria Romantika, with gelato to die for.

A great spot for lunch on your way to/from Lake Bled, Gostišče Tulipan in Lesce has a daily menu for less than EUR10. The portions were so large that we had the leftovers for dinner. One portion would have been enough for the two of us.
For traditional dishes from the Soča Valley, you can’t go past Hiša Polonka in Kobarid. A relaxed atmosphere, delicious food and friendly service… what more could you ask for?


What Else Should You Try While in Slovenia?

If you’re visiting in the summer and you venture out into nature (which would be a sacrilege not to), chances are you’re passing shrubs of wild berries (raspberries, blueberries, strawberries, …). Nothing tastes better during a hike in the beautiful Julian Alps than freshly picked berries (apart from some fresh bread with cheese and prosciutto, and a cool beer maybe, but who likes to carry all of that up to the mountain).

Love honey? Well, make sure then you try some while visiting Slovenia. You’re spoilt for choice, as seemingly everyone makes their own honey. The Carniolan honey bee is native to Slovenia. No wonder that everyone seems to make their own honey here.

While in Ljubljana, check out the Central Market. You can grab fresh local produce, fill up some fresh milk into your own (or a bought glass) bottle, buy some yummy pickles (if that’s your thing) and even grab a bite to eat. Grab some fresh produce, fill up fresh milk, sample yummy pickles or have a bite to eat at the Central Market. 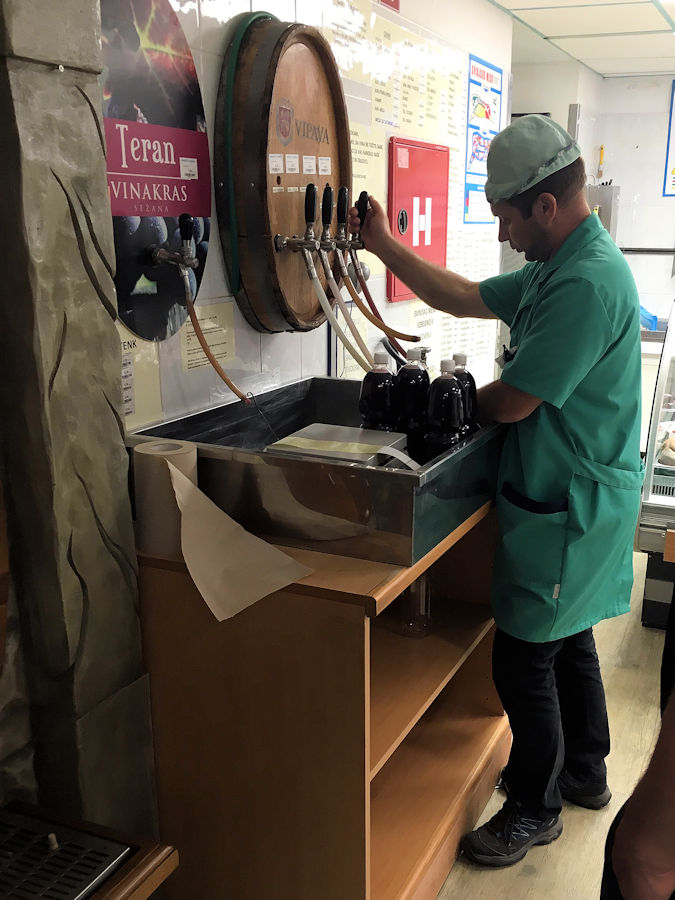 What Beverages to Sample When Visiting Slovenia

Well, first of all, tap water in Slovenia is drinkable/potable and tastes really nice. So, just (re)fill your reusable water bottle.

If a drop of alcohol (every now and then) is to your liking, make sure you sample: