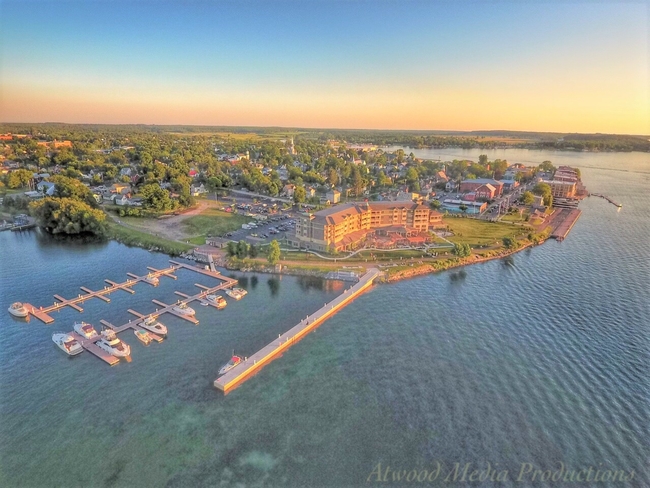 From Rolling Farmlands to Race Cars, Apple Orchards to Amish, this Empire State Road Trip Has it All

Mention New York and most people think the Big Apple  They picture the massive, iconic urban center of skyscrapers, Broadway shows, the Statue of Liberty, and countless other attractions.

But upstate, to New York City's north and northwest, lies a very different side of NYS which, while less well known, lies a sprawling region of countryside - rolling farmlands, dense forests, and tiny towns - is equally inviting in other ways.

And it's a destination with a long, diverse list of sightseeing and activities. One afternoon during a recent visit, my wife Fyllis and I were tooling around an automobile race track behind a pace car.  On another, we slowed down to pass a horse-pulled Amish buggy (for non-Americans who may be reading this, the Amish are a sect of traditionalist, German-speaking Protestants, scttered across the U.S. Northeast and Midwest, who eschew most modern living and conveniences). Then there were hikes through otherworldly environments; visits to intriguing museums;  and opportunities to become acquainted with the opulent lifestyle of the wealthy.

We were following an itinerary that links some of the most enticing things to see and do with inviting accommodations along the way. The trip was laid out by the Harbor Hotel Collection, with three properties about a three-hour drive from each other in Chautauqua (pronounced "Sha-taw-qua"), Watkins Glen, and Clayton, in New York’s 1000 Islands district. Each of these places offers its own unique reasons to visit, while also sharing appealing traits and treats. 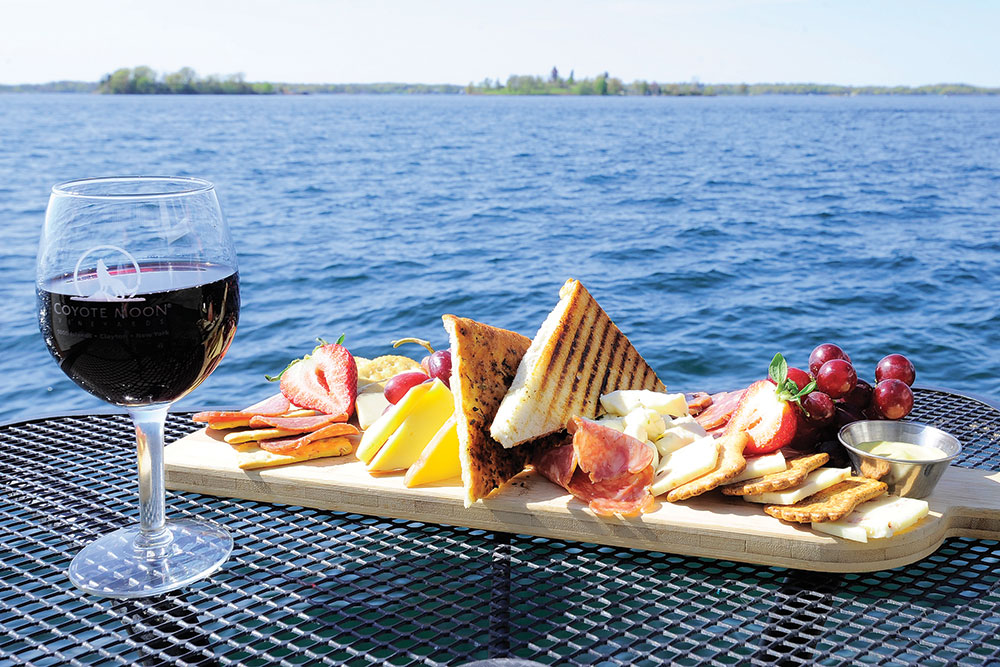 You may have to loosen your belt during the sojourn through this diet-busting destination.  Farm stands and you-pick fruit orchards vie with cheese shops and bakeries to temp passersby with hard-to-resist taste treats.  Wineries, craft breweries and cideries provide beverages to accompany those delicacies. Oenophiles may think they’ve gone to grape heaven.  More than 70 wineries line the shore of Seneca Lake alone, almost half of them connected by a driving wine trail. And those gastronomic temptations are just for starters.  Museums range from tiny establishments to world-class collections.  Jamestown's often-overlooked Fenton History Center, located in the mid-19th century home of a former U.S. congressman, senator and governor, tells much more than the story of Reuben Eaton Fenton. One room, for example, is devoted to the War of 1812 between the United States and Britain, much of which was waged along the New York-Canadian border. Other exhibits bring to life the role of people who were active with the Underground Railroad, which helped slaves escape from bondage in the South.

But center would fill only a small area of the Antique Boat Museum (above) in Clayton, in the north of the 1000 Islands area, on the St. Lawrence River and the Canadian boder.  Open May through October, it houses a priceless collection of more than 350 vessels, ranging from canoes and kayaks to sleek power boats.  Even a landlubber like me can appreciate the beauty and craftsmanship of the exhibits. Visitors may row a traditional St. Lawrence River skiff, ride in a triple-cockpit speedboat and tour La Duchesse, an elegant houseboat that was built for hotels magnate George Boldt., one of a number of millionaires who during America’s Gilded Age (1870s-1920s) built opulent mansions on some of the islands in the archipelago region of the this river.

A 'Love Castle' on an Island

This same plutocrat was responsible for nearby Boldt Castle, built in 1904 for his wife Louise, changing the name of the island on which it sits from Hart to Heart; having stone and wood hearts carved throughout; and directing that flowerbeds be planted in the shape of hearts. When Louise died before the palatial palace was completed, Boldt abandoned the project, but the six-story, 127-room manse has been restored and is open to visitors, who reach the island via a 10-minute boat trip by boat.

Whizzing Around the Track


But it was another ride which provided a much more adrenalin-boosting experience for Fyllis and me. We knew that Watkins Glen International near the eponymous village is a auto-racing fan’s dream destination but weren’t sure why until we were introduced to the story. The first chapter was written in 1948 when a race was held over a 6.6-mile route along streets in and surrounding the town.  After a mishap several years later resulted in the death of one onlooker and injuries to others, the Watkins Glen Grand Prix Race Course was constructed.

The track still hosts pro racing, but for "civilians" there's also a “Drive the Glen” program. For us it began with a briefing, signing a release form and lining up with eight other vehicles, including one snazzy Corvette, a stylish Nissan and our somewhat clunky Honda sedan. The pace car took its place in front and led us out onto the track. The motorway combines stretches of straightaway with banked pavement leading into sharp hairpin curves.  Despite the admonition not to exceed 60 miles per hour, I must admit that for a few moments I saw my speedometer hit 80. 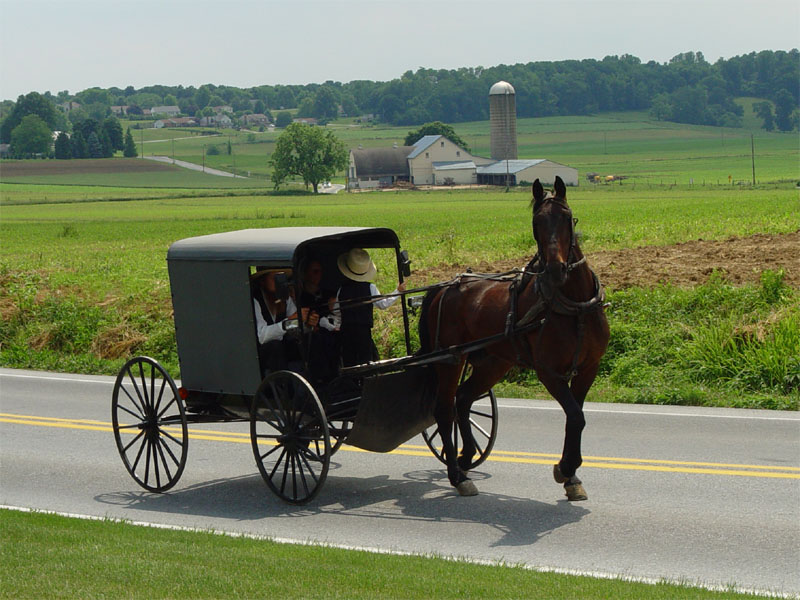 A Fascinating Glimpse of 'the Plain Folk'

Dialing that down quite a bit, contrast that velocity and the roar of engines with the gentle clip-clop of a horse pulling a buggy (always black) through quiet countryside. Here and there residents of local Amish communities cling to their traditional lifestyle, pockets of the past comprised of tidy farms and massive barns, some adorned with the image of a quilt painted on the side. 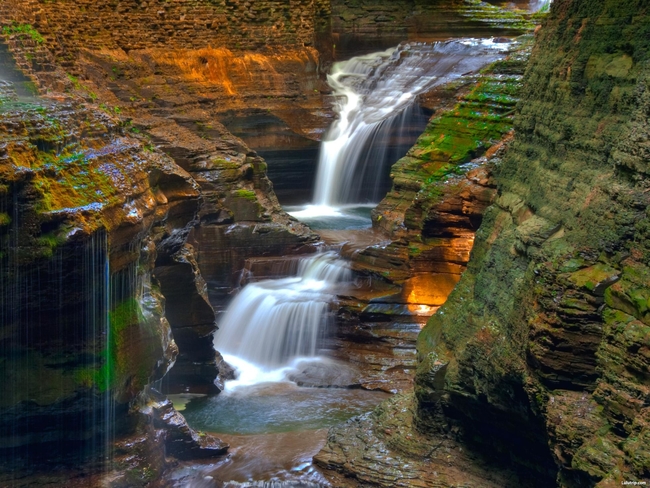 Trails for Hikers of All Stamina Levels

An even slower pace is set by hikers following trails that criss-cross the area, offering rambles suitable for all stamina and skill levels. And our personal favorites provided more than just a walk in the woods. Panama Rocks Scenic Park in Chautauqua County is an ancient forest that has been attracting visitors since the 1880s. A mile-long loop leads through a jungle-like world of towering rocks, deep crevices and small caves. Signs identify features with names like Indian Fireplace, which Native Americans used as a natural stone oven.

A very different environment is encountered at Watkins Glen State Park (above), where a deep gorge cuts through a landscape of water-sculpted rock and dense northern forest. Adding to the dramatic setting are 19 waterfalls which are squeezed into the first mile of the path. Some plummet over sheer cliffs while others trickle across flat rocks in the river bottom. The route requires climbing up, and down, a total of 832 stone steps.

If thoughts of this mountain-goat experience don’t excite you, it’s likely that other opportunities available during the Empire State Road Trip will. From apple picking in an orchard to speeding around a race track, the challenge is selecting from among the long list of something-for-everyone choices.


The three Harbor Hotel properties in New York State are the Watkins Glen Harbor Hotel on Seneca Lake; the Chatauqua Harbor Hotel, and the 1000 Islands Harbor Hotel. They all have pleasant waterfront settings, AAA four-diamond facilities, 24-hour room service, and touches reflecting their locations and history, such as the use of stone, unpainted wood and water designs provides hints of their surroundings. Among vintage photographs that line lobby walls in the Chautauqua property are some depicting the amusement park that occupied the site from 1893 to 1962, as well as Frank Sinatra, who performed there. Memorabilia related to car racing is scattered about the Watkins Glen hotel, while antique boats are a focus of photos and displays in the 1000 Islands property. All three dining rooms offer the same menu, plus nightly specials.  A cheese plate of four choices plus sides is more than enough for two people to share, other favorites include Maine lobster rolls and fettuccini with roast chicken.

Some attractions along the Empire State Road Trip itinerary are open seasonally (such as the Antique Boat Museum) so it’s best to check ahead for those you wish to visit.

For more information call (607) 535-3759 or log onto the Harbor Hotel Collection's Empire State Road Trip page. Additional info can be found at Visit1000Islands.com.