You'll happily experience an up-close and authentic view of real life in Vietnam while cruising the rivers with stops along the way in villages and hit of the big smoke - Hanoi. Taking it slow...

Torrential! And that’s the perfect word for the monsoon rains that lashed our ship for 20 minutes, and then, like all good monsoon downpours, the air stilled and regained its hot and steamy attitude and the wide Red River became a silky, calm mass of chicken-gravy-coloured water.

Welcome to northern Vietnam. We were sailing on a ten-day cruise on the Angkor Pandaw, a beautiful ship designed to mirror the ships of the Irrawaddy Flotilla that plied the waters of colonial Burma. The vessel is pretty special, and the decks gleam with the rich timber patina walked on by many barefoot passengers. The brass is polished daily and all detail on the ship is ship shape and immaculate.

I was a little concerned at the thought of a ten-day cruise, as in the past I’d only sailed for five consecutive days. I had nothing to worry about except at the end of the cruise when I just wanted a few more days on board.

Our ship left Hanoi and we sailed to glorious, UNESCO World Heritage Halong Bay, where we gently glided in sight of extravagant limestone islands and towering, craggy, limestone karst hills. We visited water-limestone caves by kayaking and row boats. 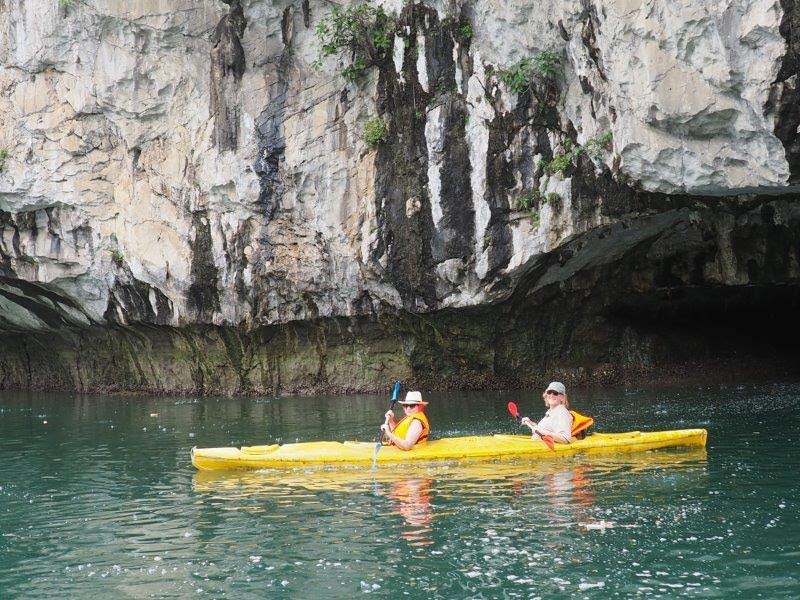 Off the ship for an afternoon as we were taken to a deserted beach, where we had an entire bay to ourselves for a cooling dip. Bliss.

As the sun set and lights from the bay’s scattered fishing boats twinkled we sat down for our first of many abundant and creative dinners.

The ship sails west and after the Red River, it hits the Lo River, the Red River delta, and then the Black River. The sights along the river don’t display quaint and pretty castles and rolling hills. I hesitate to use the word "authentic," but we were immersed in the real life of northern Vietnam and the progress and industry that keeps the country ticking along. There are concrete factories, sand mountains shoring up the banks against flooding, amazing fish farm floating villages, banana plantations and often in the distance, the soaring spires of Catholic churches, and the terraced steps of Buddhist temples.

The startling contrast of the rural tranquility and the brick kilns and facades of heavy industry, neat patches of corn fields and passionfruit vine mounds were sights that juxtaposed the life of the rivers. 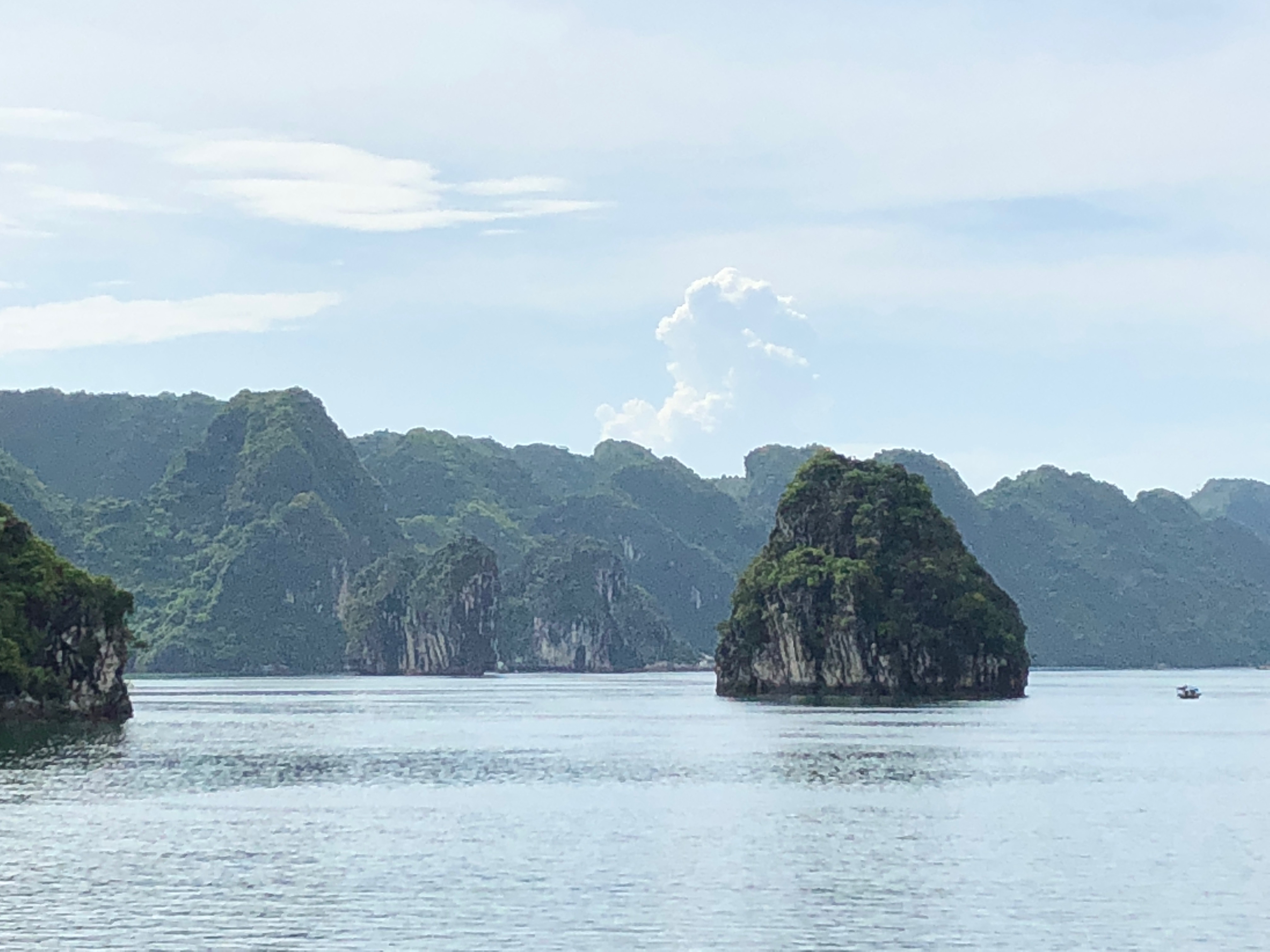 Almost every day there is an excursion (all included in the price) and to places where few other westerners are. As well as the ship being the only pleasure craft among gliding barges on the rivers, the villagers are laid back, welcoming and eager to show their talents. Bemused barge captains waived and I imagine they thought that our beautiful ship looked like it had wandered in to the wrong neighbourhood.

In one tiny village, three generations of women from 18 to 90 years of age showed us the skill behind the ubiquitous conical hat – the most practical chapeau for tropical weather countries. Such an endearing experience and we were welcomed in a friendly and understated way – cups of tea were offered and bananas and peanuts put out for us. 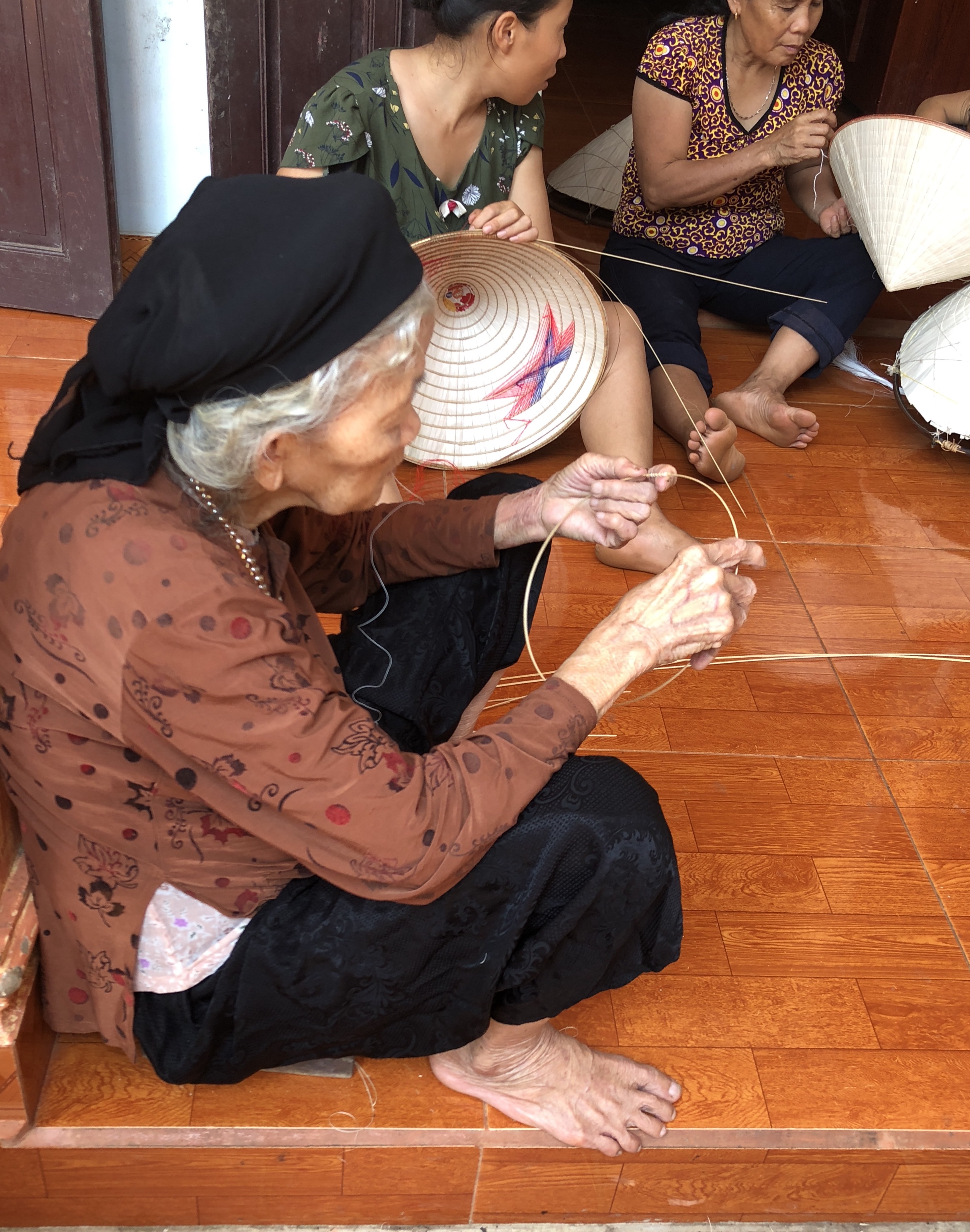 Between excursions, we came back to cold towels and a cooling drink before a tasty lunch (don’t fight it, just enjoy the banquet!).

At each stop along the river, we were looked upon as a novelty as there weren’t many Westerners in this neck of the woods. Other trips to villages include a walk through a pretty town, Thanh Ha, to watch a water puppet show, an inspection of a small village that has the noble tradition of producing fine ceramic items with the skills passed down through the generations. This was in the province of Hanoi and a local Lion Dance troupe welcomed us to the region with a raucous drumming performance and dancing lions.

We were also treated to an extraordinary concert in the village of Hung Lo temple to hear a choir - yet again, women from seven years to their 80s carrying on the tradition of "Hat Xoan" folk singing. And we danced with the singers to a fishing song, without the usual embarrassment of looking like bulls in a China shop - a testament to the generosity of spirit of these local people. 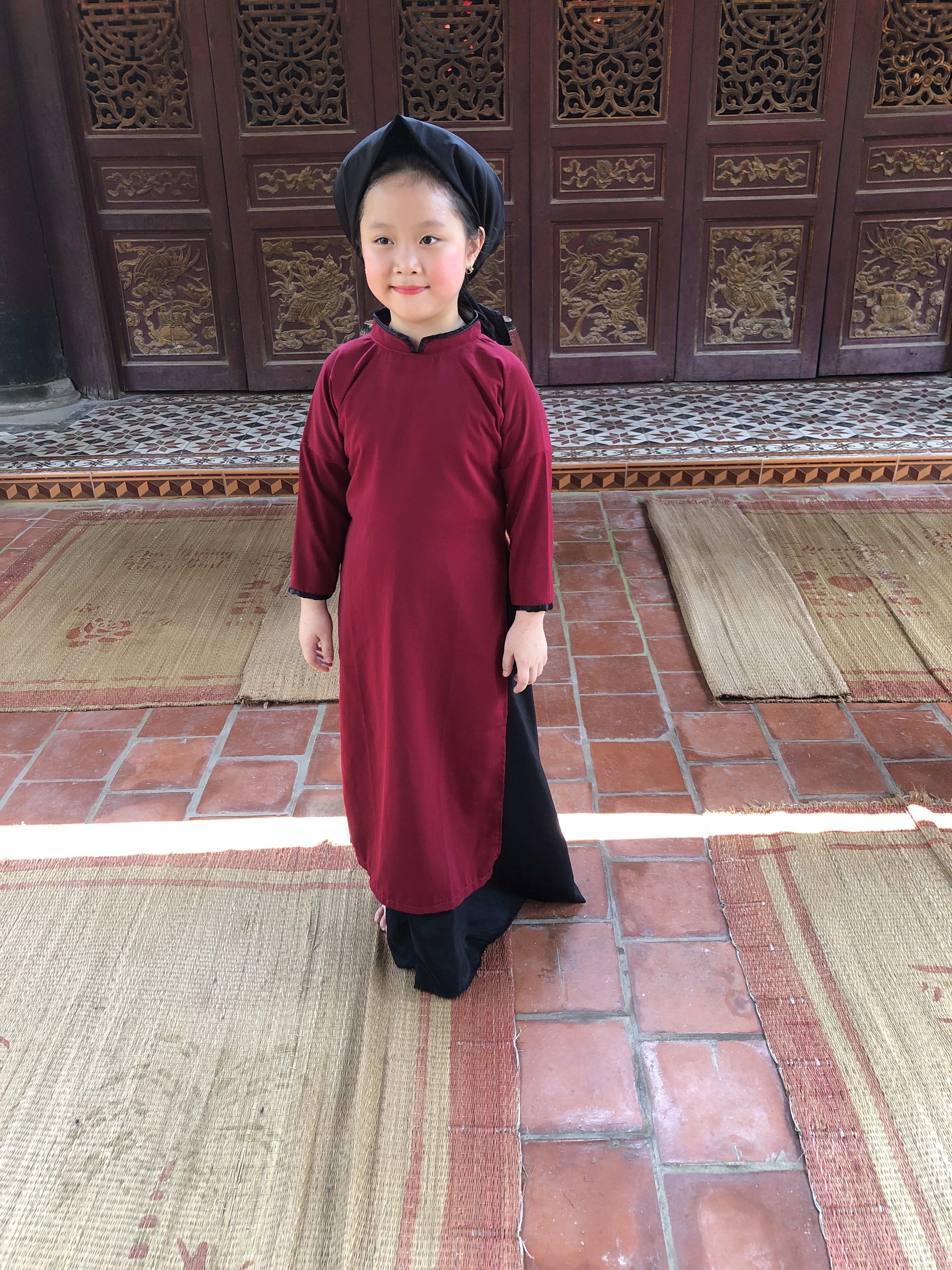 This village also has two pagodas, Thay and Tay Phuong, both built around enormous pillars of jackfruit, decorated with hundreds of statues, and crowned by sweeping upturned eaves.

Another village introduced us to the knife makers – families that for generations have been pounding red hot steel into machetes and chopping knives.

A walk around Duong Lam village exposes us to the elegance and grandeur of this UNESCO World Heritage Site, with a history that dates back around 1,200 years and many of its current houses almost 400 years old. Apart from its historical value and touristic appeal, the ancient village is a significant place for scientists to study resident communities practicing ancient forms of agriculture.

Our last meet and greet was in an H’mong village sitting among glowing green, lush rice fields in an idyllic valley with stilt houses dotting the landscape. A shared cup of tea and some locally made banana wine, peanuts and bananas - and all traditional social mores had been adhered to.

What a cruise, what an experience and what about Vietnam for another cruise? Don’t mind if I do.

Writer Bev Malzard enjoyed extra time in Hanoi before and after the cruise and will cobble a few city images together for another blog in a couple of weeks. Here's the writer with a lion, not quite extinct in Vietnam yet. This article was previously published in www.mydiscoveries.com.au. 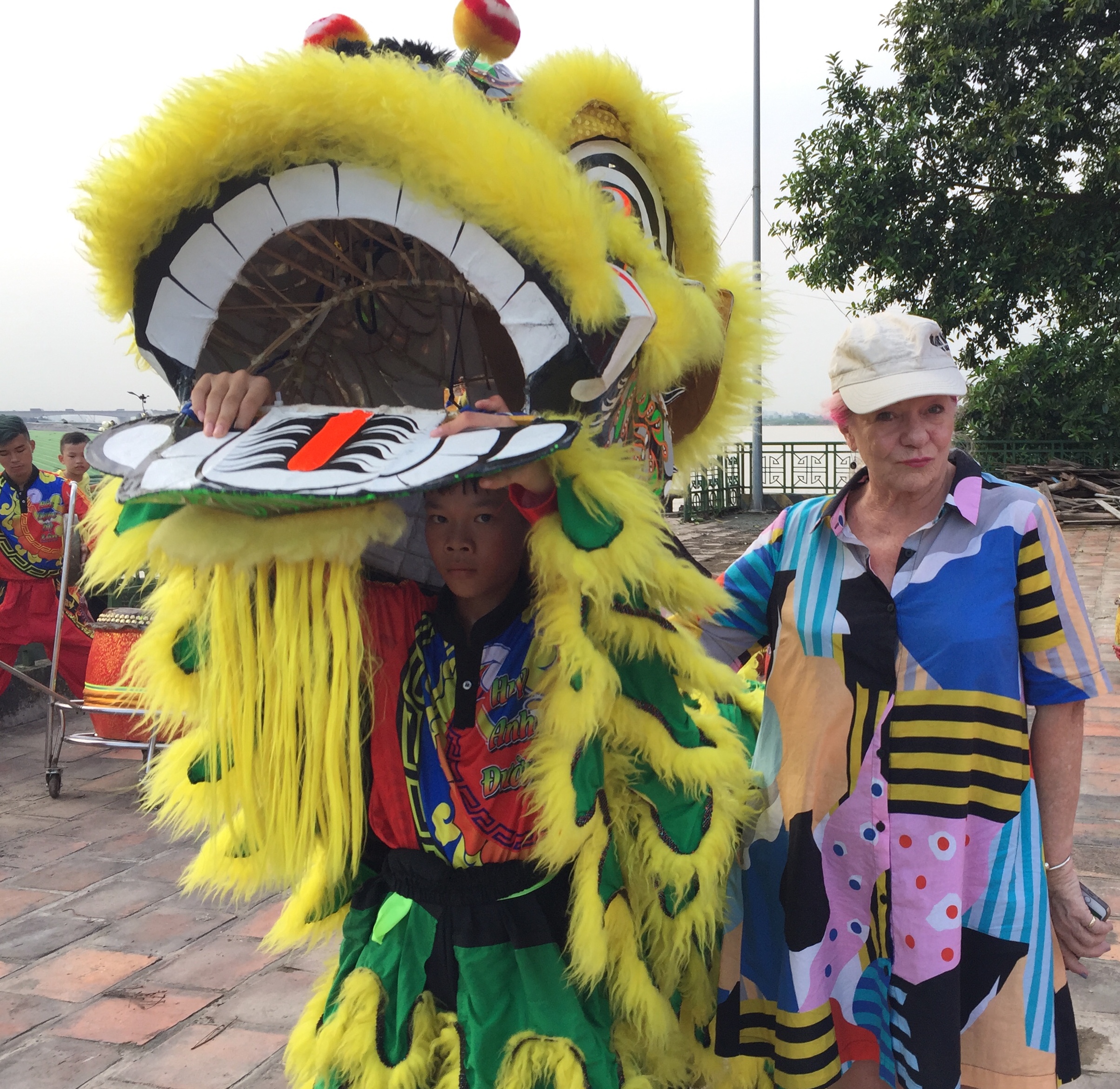 And below, here's a reminder to do our bit while travelling, start small and don't accept the plastic bags and take your own water bottle.