7 Swell Spots to Travel the World Without Leaving the USA 
At this time of limited travel, if you live in the United States it may be less easy visit other countries on your bucket list. But thanks to the USA's longstanding history of immigration, there's plenty of international culture, cuisine, and customs that can be experienced right here at home. Notable among them are the various Chinatowns in New York City, San Francisco, and elsewhere, And here are five other destinations whose ethnic enclaves will transport you to foreign shores.

Women chatting in Greek stroll by signs that identify the Spartan Gas Station and Alexander the Great Apartments. They pass restaurants where diners are feasting on pickled octopus, squid salad and gyro sandwiches. Nearby, a man wearing a diving suit emerges from a river and clambers into a boat, clutching a sponge he dredged up from the bottom.

A visit to this town of just over 24,000 on Florida's Gulf Coast near Tampa can bring to mind Greece, where sponges have been fished and used since the ancient times of Homer and Plato. And when they were also discovered beneath Florida’s waters in the 1880s, an influx of Greek immigrants were recruited to dive for them, and to this day Tarpon Springs has the highest percentage of Greek Americans of any U.S. locality.

And while as of the mid-20th century the industry tapered off considerably, thanks to algae blooms and lower demand for natural squeegees due to the development of artificial sponges, a pocket of the industry hangs on here - and these days brings in as much if not more income from tourism than from the actual sale of sponges. Attractions in its Greektown historic district include a local heritage museum; historical society museum; the Victorian Safford House, chronicling a prominent local family; and the Spongeorama sponge factory. Corners of Cuba & Haiti in Miami

While many flock to the sands and party scenes of Miami Beach and the other barrier islands of Miami Dade County, the more culturally minded head to mainland Miami to watch cigar rollers at work in  tabacaleras; gray-haired men and women loudly slapping dominoes onto tables, seemingly interested more in who can produce the loudest bangs than in how the game turns out; shop for guayabera shirts; and feast on Cuban delicacies while being serenaded by salsa and old-timey boleros. Welcome to Calle Ocho (aka Southwest Eighth Street) in the neighborhood know,n as Little Havana, settled by Cuban refugees in the 1960s after Fidel Castro seized power in their homeland, this several-block stretch is lined with restaurants, shops, galleries, and bars.

What's more, virtually all Caribbean cultures have a presence in Miami, and the other main one can be found several miles north of Little Havana in Little Haiti. Here women in colorful print dresses gather at markets to buy plantains, salt pork, and other favorite foods; shops sell kremas mapou, a blend of milk, egg yolk, cane sugar and light alcohol, as well as flaky dough pockets brimming with meat, fish and flavor; and locals browse botanicas for medicinal herbs, incense, and other voodoo supplies (in the market for a doll to cast a spell on someone?). Visitors can also shop, eat, and buy Haitian crafts at the neighborhood's Caribbean Marketplace, a replica of an iconic market in Port au Prince.

In Missouri, Hermann Is German

An hour and a half west of St. Louis, this small town was founded on the Missouri River in 1837 by members of a German-American society (attracted here because the area's rugged terrain reminded them of the Rhine Valley), and downtown Hermann is has no shortage of quaint 19th-century architecture, with more than 150 buildings listed on the National Register of Historic Places. There are several museums exploring the town and its Teutonic heritage, and guided tours of the Deutschheim State Historic Site provide an introduction to the daily life and traditions of the first German settlers. They also roll out the barrel at Oktoberfest, Wurstfest, and various other events throughout the year featuring typical food, music and dancing. And by the way, this also happens to be Missouri's most prominent wine country, with a wine trail of several vineyards, some of which have won gold medals internationally - and an early-September wine and jazz festival. 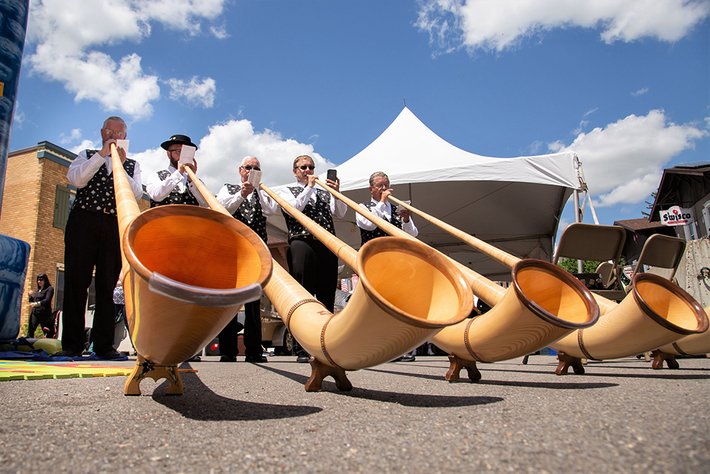 Another small town, this one just over a half hour from Wisconsin capital Madison, New Glarus was founded in 1845 by immigrants fleeing hard times in their home canton Glarus, in eastern Switzerland,  and these days the locals embrace their town's Swiss heritage with a passion. Downtown is full of Alpine-style chalets adorned with boxes of geraniums, as well as Swiss bakeries, shops, restaurants, and museums such as the Swiss Center. Traditions from the old country including yodeling and playing the alpenhorn (above) are still practiced, and a number of festivals throughout the year such as Volksfest and the Wilhelm Tell Festival also keep the Helvetic spirit alive. Dire economic conditions also prompted Dutch Calvinists to flee the Netherlands in the 1840s and settle the town of Holland on Michigan's lower peninsula. Dutch architecture, delicacies and festivals are among features that create a charming environment. Most notable is the 12-story De Zwaan Windmill (above), one of over 9,000 that once graced the landscapes of the Netherlands; Built in 1761, it was dismantled and reassembled on its present site in 1965, where it grinds grain into flour which may be purchased. It’s surrounded by manicured gardens, canals and dikes. Tulips are everywhere, and serve as the main attraction of the annual Tulip Time Festival in mid-May.

Like Miami's Cubans, many Iranians fled their country after the 1979 Islamic Revolution, and today more than a half million and their descendants live in the Westwood section of Los Angeles (waggishly dubbed "Tehrangeles" ) between Beverly Hills and Santa Monica - the largest such concentration outside Iran. Ground zero is the Persian Square, the intersection of Westwood Boulevard and Wilkins Avenue, anchoring an area also dubbed Little Persia. Here you can find a number of Iranian shops, tea shops, and restaurants including the likes of Shamshiri Grill and Farsi Café. The Multiculti Mosaic that Is Queens, New York

By far the largest borough of New York City, Queens is also the most ethnically diverse urban area in the world, with more than half its residents born outside of the United States, hailing from more than 120 countries and speaking over 135 languages (The Tower of Babel had nothing on Queens!). Asians and Latinos are especially well represented, but depending on the neighborhood you'll also find many Greeks, Eastern Europeans, Africans, Middle Easterners, and people from all the corners of the world - along with their many shops (like the Indian sari shop above), restaurants, and nightspots. For more info on this most multicultural of boroughs, check out NYCGo.com.


This is but a brief sample of destinations around the United States where people may enjoy attractions and appeals of other countries and cultures.  There are many, many more, including picturesque Danneborg, Nebraska, with its romantic homes and Danish festivals; Mineral Point, Wisconsin, where restored houses built in the 1830s by miners from Cornwell, England are among reminders of those early settlers; the Asiatown neighborhood of Houston, Texas, with a melting pot of architecture, shops, restaurants and experiences reminiscent of Vietnam, Korea, Pakistan, Bangladesh, and other Asian countries; and other Texas towns such as West and La Grange where the heritage of its Czech immigrants is still kept alive.