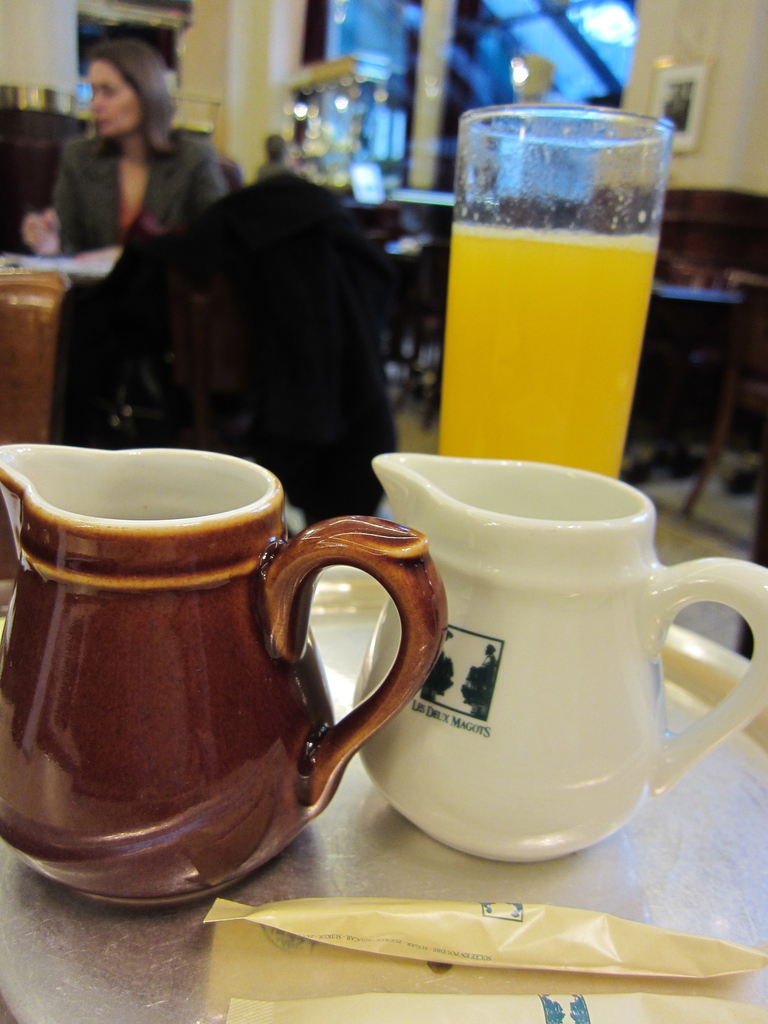 On Boulevard Saint-Germain-des-Prés, sitting a short block away from each other, are rival cafés Café de Flore and Café Les Deux Magots.  They became rivals in the 1920’s and 30’s, when the intellectuals, writers, and artists of the period became loyal to one or the other.  On my recent trip to Paris, I decided to choose my own personal favorite.

Parisian cafés are more than a place to have a quick coffee in the morning.  They are a gathering place for friends, a meeting place for colleagues, and a home away from home for locals to sit and mull over the newspaper.   The outside tables are filled with patrons that sit facing the boulevard, drinking espresso or sipping wine (depending on the time of day), smoking Galoises, greeting the passers by, and discussing the news of the day.  Inside, business meetings and rendezvous are more likely to occur.

Both Café de Flore and Café Les Deux Magots first opened in the late 19th century.  It is said that Jean Paul Sartre and Simone de Beauvoir discussed existentialism at Café de Flore, while Ernest Hemingway and Pablo Picasso preferred Les Deux Magots.
Café de Flore  sits on the corner of Boulevard Saint-Germain and the Rue St. Benoit.  The art deco interior, with red leather banquettes and polished mahogany, has changed little over the years.  During the Occupation of World War II, it is said that the Germans preferred Deux Magots, so many of the writers moved to Flore, where they were kept warm in winter by the large stove that still sits in the middle of the room.

Café Le Deux Magots faces the church of St-Germain-des-Prés, the oldest church in Paris.  (Parts of the church date back to the 6th century.)  In 1813 it opened as a shop that sold silk and textiles, taking its name from a popular play of the time, “The Two Magots of China.”  The term “magots” refers to Chinese traders, and is represented by the two wooden statues that sit on either side of a large column, presiding over the room.  By 1914, Deux Magots joined Flore as a venue where proponents of the surrealist movement could congregate for passionate discussions.

So, to my test.  On alternate mornings, I stopped for breakfast at Café de Flore and Les Deux Magots.  I made my judgement based not so much on the cuisine, because both are exceptional in that respect, but on where I felt more comfortable.  Come to think of it, this is probably how the writers and philosophers of the past chose their spot.

In the end I chose Les Deux Magots...the sun streaming through the tall windows, and the kind white-aproned waiters, so patient with my badly-accented French, won me over.  Each morning I would have a café au lait, which was brought to me as a small brown ceramic pitcher of coffee and a separate white pitcher of steamed milk.  I would also have a tall glass of jus d'orange pressé and either a piece of baguette with butter and jam, or, on one very late morning, fried eggs and jambon.  I noticed that the woman next to me had ordered thick slices of toasted brioche one day...if you're a regular, you know to order things like that. I ordered it the next morning.

On one morning I sat next to an elderly man reading a huge history book...he was fascinated by my slim Kindle.  I showed him how I could electronically turn over the corner of a page to bookmark it, just as he folded over the corner of his paper pages.  We bonded, and, in familiar silence, went back to reading our respective books.  At that moment, I felt I belonged there.

So my vote is in, and it goes to Café Le Deux Magots.