An hour south of Pamplona where Ernest Hemingway famously (and tens of thousands after him) ran with the bulls, Tudela, the second largest city in the region of Navarre after Pamplona, is a metropolis of many distinctions, not least among them a Jewish history of majestic proportions. It was home to some of the most renowned figures in Sephardic literature and scholarship; its two still-existent Juderias (Jewish quarters) are among the most extensive in all of Spain. Yet for the longest time, Tudela’s Jewish erstwhile presence was forgotten, victim to a kind of collective amnesia. And then a 53-year-old librarian/archivist made an accidental discovery, and the process of remembering began.

Julio Segura Moneo is a gentle and retiring man with a passion for old books, which makes him well suited to his position as Tudela’s archivist. He works out of the 18th-century palace of the Marquis of Huarte, whose fairly low-key facade (below) hides an extravagant Baroque interior (below right). Behind its massive wooden doors is a courtyard, three stories high and capped with a skylit dome. On either end of the courtyard, a pair of staircases, paved with diamond-shaped marble tiles of gold and white, rise to meet on a small landing. From each landing, four steps lead to a larger landing seemingly suspended in the center of the court, from which two staircases climb to opposite sides of the balcony-rimmed second floor. Here, in a vaulted room modernized with fluorescent lights, office furniture and computers, Julio Segura Moneo routinely examines and arranges the documents of Tudela’s past.

One day, the librarian/archivist happened upon an old record book that contained a list of privileges conferred by Spanish kings on the Jews from the 12th through 15th centuries. “I had always been interested in Spain’s Jewish past -- in Spain this is a subject of interest to every student of history,” he says. “Still finding this list made me curious to know more.”

Shortly after, he was shelving medieval volumes of notarized transactions and noticed the binding of one had a sizable bulge. “I took a knife and slit the cover open,” Segura says. “There were folded sheets of parchments wedged inside. I slit the back cover open; parchments had been wedged in there as well.”

One by one, the librarian unfolded the large yellowing sheets. Although worn, torn and faded in places, each was a legible 15th-century document that had some connection to Tudela’s medieval Jewish community. Among them were proceedings of rabbinical courts, Beth Dins, dated 1443, 1468, and 1472, marriage contracts, ketubahs, from 1482 and 1487, a Biblical fragment in Aramaic, another with a portion of Exodus printed in double columns of Hebrew. Segura sat before the weathered parchments, stunned by his discovery, aware he was the first to see something that had been hidden away for more than 500 years. “I tried to imagine who would have done this,” the archivist says. “Was it someone who was about to go into exile? Or was it someone who had converted and continued living in Tudela? What was his state of mind like? He must have felt some kind of desperation, some great desire to preserve evidence that Jewish people had once lived here. He was clever to hide these documents in a book of notarized accounts. I expect he knew such records would probably not be destroyed, and so his trove would be safe.

“There was a New-Christian scribe who wrote the first history of Navarre in 1632,” Segura adds. “His father had been a notary, and he claimed to be Jewish in his heart. Could he have been the one who hid the documents? We can never know.”

But the people of Tudela did get to know about the archivist’s accidental discovery, and it awakened an interest in this long forgotten part of their collective history. In the eight years that have passed since Segura noticed a bulge in the binding of an old book, Tudela’s Jewish past has become part of Tudela’s present. The actual streets of the two well preserved Juderias have been identified and signposted. A synagogue beside the Romanesque cloister of the cathedral has been restored. And the illustrious nature of this medieval Jewish community has become part of the city’s general consciousness.

The peaceful cohabitation of Christian, Muslim, and Jewish cultures for centuries shaped Tudela’s life and appearance. Jews were restricted to certain sections; yet their’s was a far more tolerant environment than existed throughout the rest of Spain. The massive demonstrations and forced conversions that spread from Seville to Barcelona in the late 13th century never came to Tudela. There was no Inquisition here, not before nor after the expulsion. In 1492, Jews exiled from Castille/Aragon came to Tudela where exile was resisted for an additional six years. The last expulsion in Spain was from Navarre in 1498.

At that point, those who would not convert left for Bayonne and Bordeaux, the Ottoman lands. Those who did convert changed their names so there is no way, therefore, of linking the present citizenry to the past. But in the new-found spirit of inquiry, a list of 115 Jewish names was found. “Thanks to a thousand happy coincidences, I discovered my Tudelian origins,” says Haim Menir Sokkar, an Egyptian-born Jew who has lived in France since 1949. His family name was on that list along with other Sephardim who have joined with Christians citizens of Tudela who suspect they have Sephardic ancestors in the formation of the Association of Friends of the Sephardim of Tudela. The group’s major undertaking is the creation of a museum of Tudela’s Sephardic heritage, an initiative, supported by both the University of Navarre and Hebrew University in Jerusalem, which will showcase Tudela’s wealth of archaelogical Sephardic treasures.

A Message Across Time

The parchments will be undoubtedly be deposited in the museum as well. For now, however, they remain in the second floor room of the Palace of the Marquis of Huarte, enclosed in a folder measuring perhaps two square feet and labeled Documenta Hebraeorum, except for the times Mr. Segura arranges for their public exhibition outside of Tudela.

The drama of discovery has given new direction to the archivist’s professional life. It is as if he received a message across time that has spurred him to bring what was buried to the surface. He hosts interested visitors, visits Israel under the auspices of the Spanish government, and absorbs himself in learning about Tudela’s Jewish history. 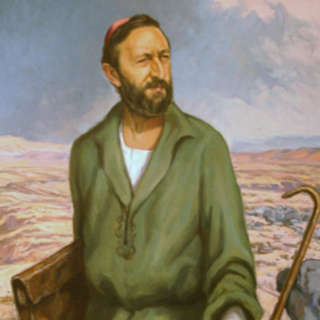 “The kings of Navarre wanted the Jews to live here,” he notes. “The royalty protected them. They were the lenders, doctors, commercial figures, the professional class. The high standards of the Tudela Jewish community explains why it fostered the existence of such great figures of Hebrew literature as the poet and philosopher Yehuda Halevi, the scholar-calligrapher Abraham Ben Ezra, and the travel writer Benjamin de Tudela” (left).

In his private office adjoining the archival room, Segura stores an ashlar carved with half a Star of David which was found in the wall of the castle and a massive bust of Benjamin of Tudela. On his desk lies a copy of the first Spanish translation of The Journey of Benjamin of Tudela, published in 1918 with a critical commentary. “Benjamin traveled all around Spain and beyond to Italy,” he notes. He describes Jewish life in all these different places in his book.

“I have come to feel an inexplicable closeness to the Jewish past,” Segura says as he walks the maze of zigzagging streets of the old city, pointing out various houses of likely Jewish origin, the street signs, the clearly marked boundaries of the two Juderias -- one within and one without the castle walls. He stops at the sites of the city’s three synagogues and the two monuments to Benjamin of Tudela , one an abstract sculpture at the entry to the Nueva Juderia, the other a bust in the Plaza of the Juderia which previously was a garden of a palace but now belongs to Tudela’s small university.

The Jetty from Which Benjamin Departed

But it is the mountain-top view from the castle grounds that seems to inspire the archivist most of all. Down below the Queiles River meets the Ebro which runs east across Navarre and on through Aragon and Catalonia where it empties out into the Mediterranean Sea. The water is a dim yellow in this late afternoon light, the medieval buildings and mountains beyond are the color of sand. Directly ahead is the jetty from which Benjamin of Tudela departed on his long journey.

Perhaps this quiet, scholarly man with a love of old books is thinking how, as a result of a chance encounter with the bulging binding of an old volume, he too has embarked on a journey. Like the Ebro, its end is out of sight; yet already it has brought Benjamin the traveler and those of his long-gone community back home into the collective memory of the citizens of his city.

Myrna Katz Frommer and Harvey Frommer are a wife and husband team who successfully bridge the worlds of popular culture and traditional scholarship. Co-authors of the critically acclaimed interactive oral histories It Happened in the Catskills, It Happened in Brooklyn, Growing Up Jewish in America, It Happened on Broadway, It Happened in Manhattan, It Happened in Miami. They teach what they practice as professors at Dartmouth College. They are also travel writers who specialize in luxury properties and fine dining as well as cultural history and Jewish history and heritage in the United States, Europe, and the Caribbean.