Istanbul is a wonderful city with rich and ancient history. It is the capital of Turkey and there are many places worth a visit. 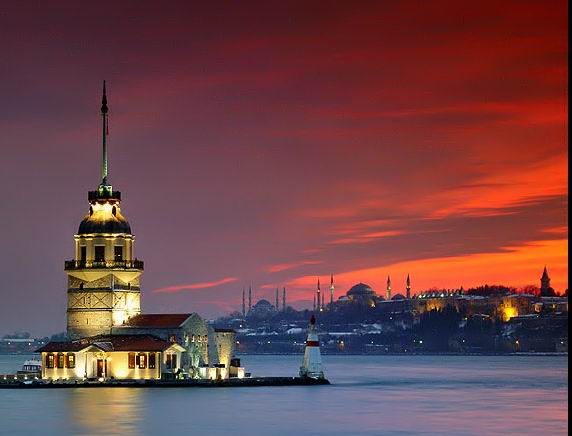 Your travel to Istanbul will give you the opportunity to see the Sultan Ahmed Mosque or the so-called Blue Mosque. The first thing that impresses us when we reach this mosque is the fact that it is the only mosque in the world with 6 minarets, 4 of which contain 3, and the remaining two have two balconies to the minaret, from where the Hoca called the faithful to pray. According to the legend, the architect did not understand the desire of the Sultan and instead of building gold minarets, he built a mosque with minarets. When the construction ended, the sultan had to add a seventh minaret to the mosque in Mecca, which also had six minarets, in order to restore its religious superiority. The mosque is surrounded by three large yards with stonewalls and gates. Three massive doors lead to the inner yard, covered with marble. In the center of the courtyard you will see hexagonal sadirvan (a fountain for ritual ceremonies) surrounded by six marble columns. Sultan Ahmed Mosque in Istanbul is Located opposite Hagia Sophia, both structures seem to compete in beauty and grandeur. The name of the latter comes from Latin and means "divine wisdom". During your travel there, you will notice "Hippodrome" square or "Sultan Ahmed" which is located between Hagia Sophia and the Blue Mosque. The historical monuments built on the square are amongst the most important sights in the city. The construction of the square began immediately after the capture of the city by the Romans in the reign of Emperor Septimius Severus. It is completed in the day when Emperor Constantine the Great declared Constantinople for the second capital of the Roman Empire. The place is also known as the Square of horses, because it was used primary for horseracing.

What you can also see during your travel in Istanbul is the German Fountain, which was built in 1898. The German Emperor Wilhelm ÐÂÐÂ, during his second voyage in the East, remained impressed by the hospitality of Istanbul. While returning to his homeland, he made the project of the wonderful fountain and sent it as a gift to Istanbul.

Another travel destination is the rope bridge above the Bosphorus, which connects the European and Asian sides of Istanbul. The walk on that bridge is an incredible pleasure for all the tourists and the sight that reveals is truly unique.

There are many more places that you can visit during your travel to Istanbul. The city is enormous and you will need several days to see all its beauties, which are many.