Canada's largest city of course boasts a large and varied menu of sites and experiences to keep you busy on holiday. But if you have the time, there are also many compelling places in Ontario outside Toronto to enjoy nature, culture, and adventure as day trips or overnighters (you can either drive yourself, take a bus tour, or even a private car tour). Have a look at the following and see what might interest you!

Just over an hour down Lake Ontario in the city of Hamilton, this 750-acre, mostly drive-through park with some walk-through areas (top) is home to more than a thousand animals - not just lions but also the likes of zebras, giraffes, white rhinos, ostriches, kangaroos, bison, and many more.
750 acres

A little farther afield (a bit over five hours' drive), Canada's oldest provincial park (1893) is a spread of 7,653 square kilometers (2,955 sq mi). Besides having some 19 hiking trails, the park is popular for camping, fishing, mountain biking, horseback riding, and cross-country skiing.throughout its forests, meadows, rivers, and lakes. And besides being a mecca for birders (llons are us - hey, it's Canada!), visitors can also spot deer, bears, wolves, and much more.

About an hour north of downtown this 134-hectare (331-acre) amusement park is the best Canada has to offer, with a mix of shows and rides from adrenaline pumpers like Yukon Striker, Leviathan, and Behemoth to the gentle, little-kid-friendly likes of Planet Snoopy and KidZville. There's also an 8ha (20-acre) section devoted to water rides and pools.

Just under two hours north of Toronto, the town of Gravenhurst is located on the shores of Lake Muskoka in the heart of southern Ontario's cottage country. This popular lake is lined with guesthouses, lodging, and summer/weekend cottages - some  owned by the Canada's most well-known film stars and other celebs - with attractions including beaching, water sports, and  cruises on the steamships RMS Segwun and Wenonah II. Meanwhile, THe 19th-century downtown of this onetime logging/lumbering town offers charming shopping, dining, historic sites/museums, and the surrounding area plenty of nature and adventure pursuits. 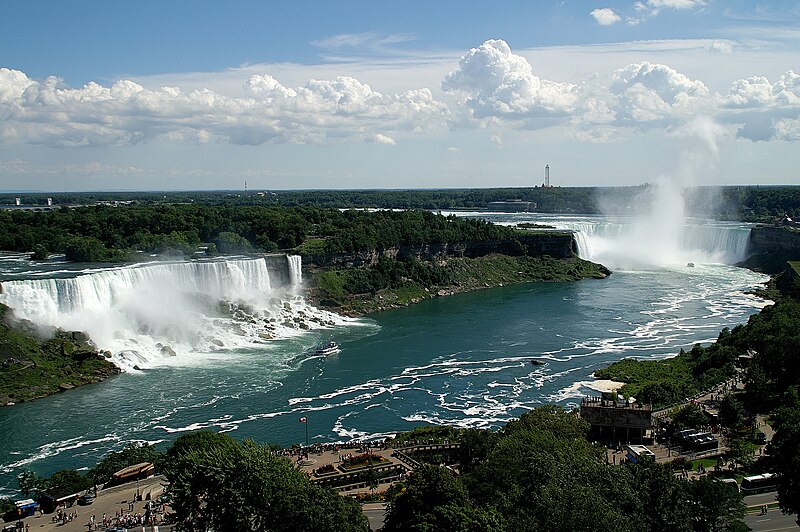 In the other direction, two hours south of Toronto, one of North America's first tourist destinations is famously composed of three gargantuan waterfalls which have the highest flow rate of any on the continent. And over many generations plenty of lodging, dining, and entertainment has grown up in the two separate cities that share the falls - one on the Ontario side and the other in New York State - see both, and consider overnighting!

About an hour south of Toronto (and just 20 minutes from Niagara Falls) and settled in the late 18th century, this town of just under 18,000 draws visitors with its quaint colonial architecture (including landmarks like Fort George), surrounding wineries, charming shops (as well as modern outlet mall), and events such as the Shaw Festival of theater running from April through December and marking its 60th anniversary this coming year.

There's a good trio of options for skiing, snowboarding, and other frosty fun in winter, as well as warmer-weather activities such as hiking, biking, swimming, ziplining, "mountain coasters," and other outdoorsy pursuits. Two between an hour and 90 minutes north of Toronto are Mount Louis Moonstone in the town of Coldwater and Horseshoe Resort, a half hour away near the town of Barrie (and correspondingly closer to Toronto); both are relatively modest mountains, and therefore good options for family skiing.


Another option about an hour farther north of the above, is the Blue Mountain resort outside Collingwood, on the shore of Georgian Bay (part of Lake Huron, one of the Great Lakes). With a top elevation of 450 meters (1,480 feet), it's actually Canada's third busiest winter resort after Whistler-Blackcomb in British Columbia and Quebec's Mont Tremblant.

St. Jacobs and its Farmers' Market

About an hour and 40 minutes west of Toronto and founded in the mid-19th century, St. Jacobs is popular for its quaint village architecture, cute ships, and most uniquely its heritage of Mennonites (akin to Amish, down to the beards and buggies). The year-round farmers' market in which they and other local farmers hawk their produce and prepared food also includes artisans selling furniture, crafts, and home décor.

Also west of Toronto (just under two hours), the birthplace of Justin Bieber is a charming town with Victorian architecture and plenty of cute places to stay, shop, and eat. But its claim to fame are August's mostly classical Summer Music festival and especially its May-through-October Stratford Festival of theater, built on the works of William Shakespeare (the city is named for the Bard's home in England) but with many other classic and contemporary works.