Titanic Belfast, a Celebration of Triumph and Tragedy Samson and Goliath, the huge gantry cranes of Belfast’s Harland and Wolff shipyard, still dominate the city skyline though the incessant din of heavy shipbuilding is now but a memory. The company, which once employed more than 10,000 skilled craftsmen and engineers, has contracted its workforce to around 500, and has diversified into new technologies, such as wave and wind turbine construction. The skyline, however, is now enhanced by a new structure, and the slipways, from which the sister ships, Titanic, Olympic, and Britannic were launched are now populated by visitors to Titanic Belfast, the height of which matches that of those magnificent vessels.

Set out in the shape of a four-pointed star, representing the White Star Shipping Line, the corners beetle above the surrounding moat and walkway, as did the prows of Titanic and Olympic while under construction. Their aluminium facades catch the light in a manner that also suggests the floating ice mountain that became Titanic’s nemesis. If anything, the sense of scale becomes even more pronounced as one enters the atrium. Escalators rise through five of the six floors, to create an almost ecclesiastic feeling of height. To one side, the outer walls of the various galleries are decorated by rust-coloured panels representing the steel plates of the ship’s hull. Titanic Belfast is not a museum. There are no artefacts or salvaged items from the ship. Instead, the exhibition takes one through the industrial history of the city and its most famous ship, up to the most recent discoveries made using deep-sea submersibles. These are set out in nine galleries distributed among four floors. The first gallery reminds us that Belfast, in addition to shipbuilding, was famous during the 19th and early 20th centuries for its tobacco and whiskey trades, rope making and linen manufacture. The gallery walls are adorned with large and quite stunning photographs from that period, illustrating the city streets, its housing and the hard lives of the workers and their families. Many of these are animated by the silhouettes of passing people and the sounds of simulated conversations. The history of the shipyard is told along with those of the Cunard and White Star shipping lines. 19th-century emigration, politics, and the introduction of radio and Morse code are included.

Gallery Two consists of an optional fairground-style ride, which transports one to the tenebrous depths of the ship under construction, then rises through the various levels from the engine room to the higher decks, accompanied by a cacophony that can only suggest the deafening noise the workmen had to endure. For those unwilling to experience the claustrophobic darkness and motion of the ride, there is an alternative walk-through that tells the same story. This leads on to the story of the launch of the Titanic and a film of the same, which, if one stands in the right place and uses some imagination, one can superimpose on the slipway that can be seen through the window behind the screen. The fourth gallery describes the fitting-out of the ship, which took 3,000 men ten months to complete. Reconstructions of first, second and third class cabins, onto which moving images of passengers are superimposed, illustrate the contrasts in accommodation. A three-screen projection, if one again positions oneself near its centre, evokes a distinct sense of the ship’s motion as it takes one, in a four-minute ascent, from the boiler and engine rooms, through the cabin decks and state rooms to the bridge.

The story of Titanic’s only voyage is well known, but loses none of its poignancy as one progresses through the next three galleries, which are filled with details of its schedule, the radio conversations that preceded the sinking, eyewitness accounts of both rescuers and rescued, and reports from the newspaper frenzy that inevitably followed the tragic events. There are also reconstructions of the question-and-answer sessions from the subsequent inquiry.

Attention is drawn to the fates of Titanic’s sister ships. Britannic became a hospital ship during World War I, but struck a mine and sank in the Aegean Sea in 1916. Such were the lessons learned from Titanic, however, that only 30 people died. Fate was kinder to Olympic, which continued in service until 1935, when it was brought to the River Tyne to be dismantled and its fittings sold off. The original wood panelling, stained glass windows, mirrors and ceiling can be seen in the Olympic Dining Suite of the White Swan Hotel, Alnwick, Northumberland.

Since the disaster, Titanic’s story has become legend, from which it is difficult to separate myth from reality. The eighth gallery is devoted to the many books, plays and films that have purported to tell this story. 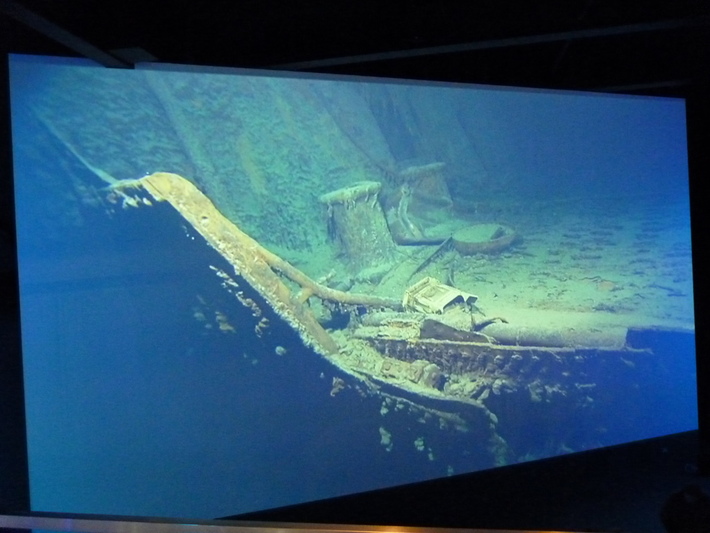 The epic tale is brought up to date by film of the Titanic as she is now, lying some 3,000 metres below the North Atlantic waves. In 1985, Dr Robert Ballard and a team from the Woods Hole Oceanographic Institution used an unmanned submersible, then a three-man submarine, to discover the liner’s final resting place. Moving images of the Titanic, taken on these trips make up the film, which shows that the vessel has broken into two parts, separated by a distance of about half-a-mile. The front section is largely intact, while the rear has broken up, scattering many items from the ship and the belongings of passengers, which lie easily recognisable across the ocean bed. A glass floor allows one to drift over a re-creation of the scene, made up from many thousands of images of the site.

The upper floors of the building are not open to visitors, but consist of rooms that are available for hire for private or corporate functions, such as banquets or conferences. Having experienced the exhibition, visitors should now make their way along the slipway to the water’s edge, into which Titanic was launched more than a century ago, carrying with it the pride of an entire city. After so many troubled years, and with help from Titanic Belfast, this pride is once more on the rise.