As the Spanish wine industry has grown and deepened in complexity in the past couple of decades well beyond Andalusia’s traditional sherries, oenophiles the world over have become increasingly familiar with names like Rioja, Penedés, and Rias Baixas. But to many, Majorca's Plà i Llevant and Binissalem-Mallorca might still require a wee bit of explaining.

Actually, winemaking in the Balearic Islands goes back to Roman Hispania, a century before Christ (these were, after all, the folks who invented the phrase “in vino veritas”), but the industry was wiped out around at the end of the 19th  century by that dread bug phylloxera, as it was in France and elsewhere in Europe. Unlike in France, here it didn’t really recover either its quality or quantity for a century. Since the 1990s, a campaign to upgrade equipment and techniques has led to a growing variety of good and even award-winning red wines, white wines, and rosés from light and snappy to full-bodied and chewy; some of them blend in local varietals like Manto Negro, Callet, Fogonell, and Monastrell. I’ve tasted a couple of bottles without much in the way of grape expectations, yet come away fairly impressed. 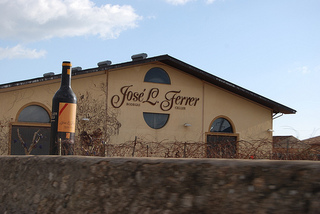 Home these days to dozens of bodegas (wineries), the island has three main wine regions: Plà i Llevant in the east,Serra Tramuntana out west, and the best known, Binissalem, in the middle. Some are centuries old with a very traditional feel, while others date from the 1980s onward; top names to look for are Macià Batle, José Luis Ferrer (right), and Ànima Negra.  And many are now set up to receive visitors, either with regular opening hours or by appointment.

For more info, check out BinissalemDO.com, a Web site run by the regulating council of that region’s Denomination of Origin. On your next visit, make a little time for the old vino, and you, too, will be impressed by the veritas – not to mention thoroughly charmed.