The Mountain Gorillas of Rwanda. 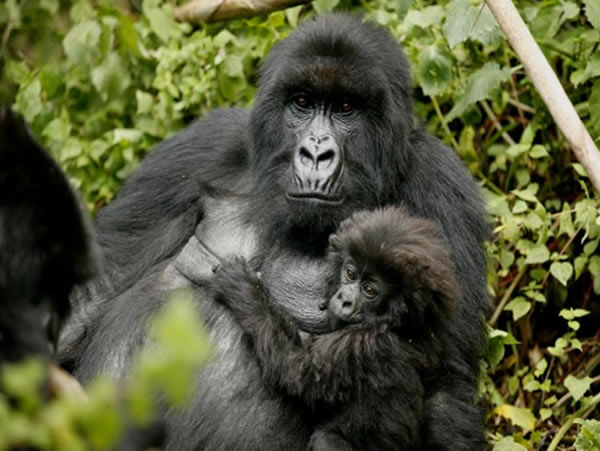 The Virungas are the last outpost of the endangered mountain gorilla, and their lash slopes provide an appropriately dramatic natural setting for what is perhaps the most poignant and thrilling wildlife experience in Africa. Nothing can prepare rwanda gorilla trekking visitor for the impact of encountering a troop of gorillas, munching bamboo in their unfenced natural habitat. The sheer physical presence of an adult male silverback - three times as bulky as the average man, yet remarkably peaceable and tolerant of human visitors - defies any verbal description. Nor are there words to convey the thrill of recognition attached to starring deep into the liquid brown eyes of these gentle giants, who share some  97% of their genes with human beings.

That mountain gorillas survive today is largely thanks to Dian Fosey, Dian Fossey was an American zoologist who undertook an extensive study of gorilla groups over a period of 18 years. She studied them daily in the mountain forests of Rwanda, initially encouraged to work there by famous anthropologist Louis Leakey.  She is buried, alongside some of the animals to which she dedicated her life,  at Karisoke  the centre of  her research in the Virungas,

Dian Fossey became a household name following the release of the biographical film Gorillas in the Mist, which was set in the Volcanoes Natinonal Park, and shot on location at the same place

Critical and public acclaim ensured that Gorillas in the Mist also served to raise international awareness of the plight of the mountain gorilla, whose numbers have increased from an all-time low of 250 individuals  in the 1970s to  more than twice that number by  2001.

Roughly half of the world’s mountain gorillas are resident of Rwandan slopes of the Virungas, where habituated groups - ranging in size from 7 to 40 individuals  – can be visited by tourists daily.  Permits to visit the gorillas are issued by the office Rwandaise du Tourisme et des Parcs Nationaux (ORTPN)/ The Rwandan Tourism Board, in Kigali or Ruhengeri.  Complete Rwanda gorilla tracking safaris is available from most africa safari operators.

Rwanda, the small tropical country in East Africa , offers one of the most fascinating experiences of an African safari travel, the Rwanda Gorilla trekking safari.  In fact many African travel agents  quietly agree that Rwanda is probably the best destination to visit to see these endangered mountain gorillas.   African travel hub offers comprehensive and useful information on gorilla tours in Rwanda.