The Impressive Rebirth of a Miami Seafood Icon 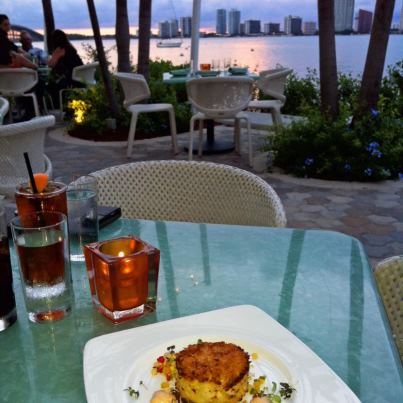 Back in 1972 when I was in grade school, out across the causeway in Rickenbacker Marina on the way to Key Biscayne, the Rusty Pelican opened, a seafood joint that became a Miami institution. But to paraphrase the old Groucho Marx saw, who wants to eat at an institution? Over nearly 40 years, the wear and tear and decline became noticeable, and so last summer the Pelican closed for a $7 million overhaul, reopening this past December.

Now, I'd always wanted to visit the place, but various factors including my family's modest income and lack of habit of eating out always seemed to get in the way. But when a special anniversary rolled around this week, I finally grabbed the opportunity.

And indeed, as the hostess was seating us, she asked, "is this a special occasion?"  Because this rusty pelican has been reborn as a sleek phoenix. It's now fully the kind of place that for locals makes an occasion particularly memorable, or is a surefire way to impress out-of-town visitors; for the out-of-towners themselves, it definitely makes for one of those unforgettable travel memories.

It starts, of course with the sophisticated, surf-and-turf menu of new chef Michael Gilligan (a Brit who's a veteran of the former W in South Beach). We had a tasting menu in which one thing was better than the other - well, except maybe for the "meh" mix of tomatoes, hearts of palm, avocado, and lotus-root chips with a vanilla-jalapeño vinaigrette, which was more than compensated by the likes of crab cakes with chipotle aioli (above) which rank among my lifetime top three thanks to the fact that they're long on fresh crab and short on filler. Other menu highlights include grouper sliders (also great beef sliders), a tasty pork-belly skewer that isn't slimey or fatty as pork belly tends to be, wild-mushroom cappuccino, ceviches, sushis, and more (there are less pricey, tapas-size "small dishes" in addition to the entrées, and honestly, that's the way I like to go - more variety and bang for the buck). I was impressed by the desserts, too, such as the scrumptious chocolate-mango cheesecake (and this is coming from someone who's not much of a fan of cheesecake). It all came with attentive and friendly service (all the more impressive because I bought one of those heavily discounted deals from LivingSocial.com).

But by now Miami is full of such world-class menus, and so what lifts the Pelican to another level is the experience of dining on the outdoor patio with the bay practically at your feet (you get great views from inside, but it's just not the same). Birds (including, yes, pelicans) swoop by, sculls slice through the water just feet away, and behind it all is downtown Miami's highrise skyline. Whether you experience it at sunset, as I did, or at night, with the city lights at full glitter, this is what truly gives The Rusty Pelican that "special occasion" edge. And I plan to bring all my out-of-towners here from now on. If you do ever make it here, say hello to Javier the manager, and tell him José Balido of Tripatini.com sent you.

For more info, check out the videos below - the first my amateur pan of the outdoor patio, the second the restaurant's more slickly produced pitch for itself. And for more details, of course, there's always the web site, www.TheRustyPelican.com.

Thanks for prodding me over toward the Key Biscayne area, Jose.  I already had KB on my list of neighborhoods to blog about on my Miami site,  but was unaware of the dining opportunities enroute - and this sounds like a place with both a great history and a fresh new look to tell about myself too:)

Sounds great, I'll have to remember the Rusty Pelican next time I'm in Miami!