When we visited Jordan in 2002, we ate lunch in one of the lowest restaurants on earth. But, it wasn’t low in the sense of being cheap, or because not very nice people eat there. Jordan’s Dead Sea Spa hotel is 400 metres below sea level, which is as low as you can get on the surface of the Earth. I did hear that, since our visit, another hotel has been built even lower down.

We drove from Amman, the country’s capital to the ancient rock city of Petra, and to Wadi Rum. We had two options ; that of taking the main road, or the one running along the banks of the Dead Sea. It was an easy choice, really!

The Dead Sea is an inland sea, surrounded by land on all sides. The River Jordan flows into it, as do several others. But, nothing flows out, because water can not flow uphill. It just evaporates away in the sun, leaving the water many times saltier than the oceans are. Most visitors like to bathe in the waters of the Dead Sea, because there is so much salt in it that it’s impossible to sink.

It makes it hard to swim in, but easy to float. Many people like to be photographed floating in the sea, reading their favourite magazine. There are no fish, and very little can grow on its shores. That’s why it’s called the Dead Sea.

Of course, we had to have a dip, and it just happened that the price of our lunch included use of the hotel’s private beach and facilities. 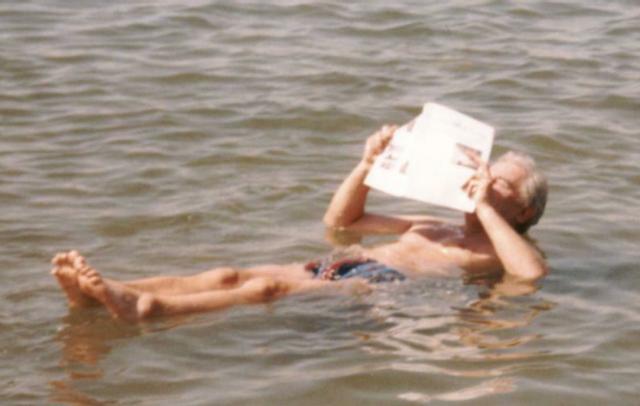 We were warned we must be very careful not to swallow any water because it is poisonous. I got a little splash on my lips, and certainly wouldn’t want a mouthful! It stung a little bit, too, where I nicked myself shaving that morning … but that nick healed in record time.

Some doctors recommend bathing in the Dead Sea because the waters are said to be able to cure some skin complaints. We bought a packet of Dead Sea salt to take home and put in the bath.

A lot of people like to take the ‘mud treatment’, and say that does feel good; whether it actually does you good, I’m not qualified to say. Most of the beaches have a ‘mud man’ but he wasn’t around. So, we applied the mud ourselves. You can’t mistake it; it’s the stuff that feels like wet talcum powder.

If you feel like a hot tub after swimming in the salt or mud, there are naturally heated hot springs and pools, and even a hot waterfall not far away. The showers at the hotel were closer, but not so much fun.

We were told that the lowest point on earth is getting lower. Jordan is a desert country, and needs a lot of water for the farmers’ crops. They take the water they need from the rivers that flow into the Dead Sea. When we went on our way again, we saw a new dam being built on the Moujib River, which is one of the best known for its spectacular wadi; the narrow canyon cut through the rocks.

The level of the sea is dropping. Its water level is 25 metres lower than it was 100 years ago, and it’s still falling by about a metre a year. Even the Jordan River itself, with water taken from it by Syria and Israel before it even enters Jordan, is almost stagnant, and contributes little. 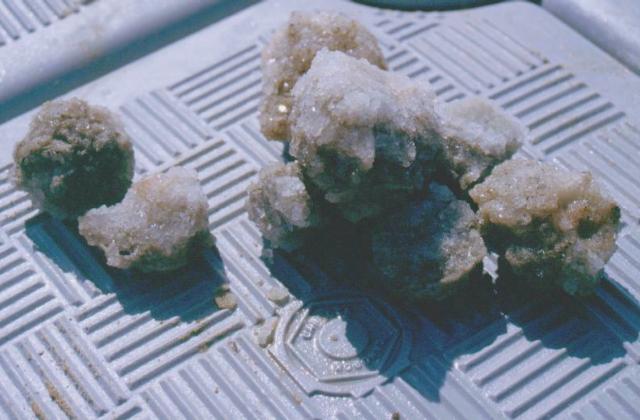 It has been suggested that the situation may be eased by bringing sea-water from the Red Sea along a 180-kilometre-long canal. Some of this water would have the salt removed to provide extra drinking water for neighbouring countries. The rest would flow down into the Dead Sea, being used to generate electricity along the way.

Some people fear, though, that this may destroy the chemical balance of the Dead Sea, and that salt water leaking from the canal may enter the underground aquifers, or water-bearing rocks upon which many local people rely for their drinking water, and say another solution must be found.

Unless something is done soon, however, many scientists say the Dead Sea will be completely dry in 50 years’ time. This will have a disastrous effect on the fresh water supplies in the area, as well as depriving Jordan of one of its most famous tourist attractions.