From there, we went to visit the similarly-named island of Burano. That’s the island where the lace-manufacturing industry has its centre. The vaporetto (water-bus) for Burano sailed from the Faro, or lighthouse, which was but 100 yards away, as the crow flies. Unfortunately, there was a canal in the way. We would have to walk all the way back to the nearest bridge, cross it and come back again along the other bank … a distance of about a mile.

But, you can get the vaporetto that will be along in a minute, we were told. That’s going to the main island, but the next stop is the Faro!

We boarded the boat, and asked for the Faro … and the conductor refused to take any money for so short a trip!

Like the glass of Murano, the lace of Burano is beautiful, but expensive, and, if you are female, or have a lady with you, I’d strongly advise keeping a firm grip on your credit card. 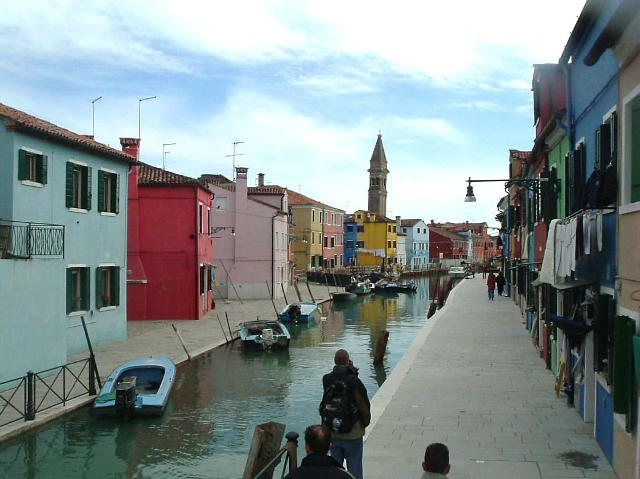 much quieter than the main island. There are canals, but nothing like as busy. And, most of the houses are painted in bright colours, rather than the peeling stucco revealing ancient brickwork that I’ve come to associate with Venice. In fact, it looks more like the Netherlands than Italy!

The Dutch comparison is heightened even more by the means of transport. Bicycles! The only wheeled transport we saw on the other two islands were handcarts delivering goods. But, a bicycle is more practicable on Burano.

And, what bikes! The best description I’ve heard so far is the Dutch ‘Omafiets’ or ‘Granny Bike; I remember, in far distant childhood, our District Nurse used to ride one!

Which left me with an unanswered question. Were they lovingly passed from father to son, and mother to daughter? Or, are they modern bikes, built in a retro style?