The Beauty of Vietnam's Halong Bay

For generations of visitors arriving by sea in North Vietnam, the geological marvel known as Halong Bay has been their first introduction to this remarkable country. The weathered limestone Karst pillars can be seen at several locations across southern China and northern Vietnam, but Halong Bay is the only place where they emerge from the sea. The bay received its name –“Bay of the Descending Dragon” – from a mythical dragon – Long in Vietnamese- that was assigned by the gods to protect Vietnam from invaders, and it spat lumps of jade into the bay, which grew into islands to protect the coastline. 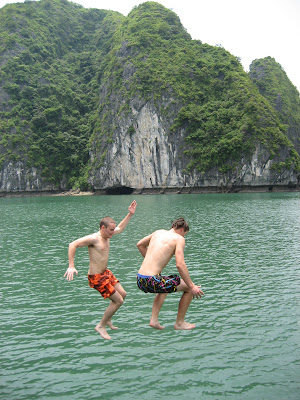 A Rocky Wonder
The 3000 limestone outcrops harbour a variety of species of flora and fauna. Over 200 species of fish and 450 species of molluscs call Halong Bay home, and the environment helps sustain a unique community of fishermen and their families. Halong bay is a UNESCO World Heritage Site, and its celebrated biodiversity is subject to several ecological studies. Lucky visitors might see some of the unique species, including the Horseshoe Crab (TachypleusGigas), a truly amazing living fossil which has not evolved significantly in 450 million years.
An Unforgettable Backdrop
Rising spectacularly from the mirror-like Gulf of Tonkin, these islands create an atmospheric backdrop for a cruise on a traditional junk, past the many small fishing villages, and mooring for dinner (locally caught) and prepared by on-board chefs. The tours can run for up to 3 days to allow visitors a chance to explore this remarkable environment. The Chinese-style junks are equipped with traditional boom sails and modern engines, and all have 5-star accommodation and cooking facilities. It is possible to purchase fish from the floating fish market and have it cooked for you on board. 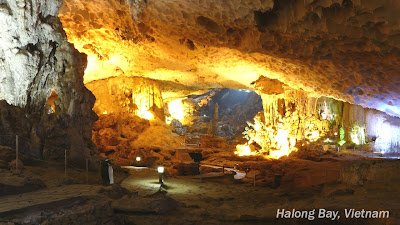 Cave of Surprises
For a supplementary payment it is possible to rent a tandem kayak to allow visitors to explore the pillars more closely. The archipelago is full of caves and grottoes with amazing stalactites, many of which are big enough to explore on foot. Centuries of waves and tides have hollowed these caves out of the porous limestone. Sung Sot Cave, known as the Cave of Surprises, is by far the largest cave, and the most suitable for exploration.
A National Treasure
The fragile marine environment has led the Vietnamese government to set up a national park area in the south-west part of the archipelago, known as Cat Ba National Park. This is the home of one of the most critically endangered species of primate, the Cat Ba Langur. Visits are possible, and the limestone pillars of the Cat Ba National Park are best accessed with a guide, as an unfamiliar visitor may have difficulty locating the trails.