The Awesome Story about Great Wall of China

The Great Wall of China, as we know it today, starts near the Yellow Sea and ends at a watch tower overlooking the White River. Stretching four thousand miles through deserts, over mountains and into the country’s northern heartland, it is a manmade wonder of the world.

Because so many people died in its making, the Chinese have called their wall “the longest cemetery in the world.” Not a single accurate map of the entire wall exists.

The Great Wall isn’t the only wall in China. There are so many walls in the country that, when added together, they total nearly 35,000 miles. To put that number in perspective, the length of China’s walls are equivalent to circling the Earth twice. The purpose of all those barriers was to keep China’s enemies out. Sometimes those objectives were met; sometimes they weren’t.

Invaders in the north were especially problematic. After the First Emperor unified the country, he sent about 300,000 soldiers to the northern frontier to defend the border. Successfully completing that assignment, those troops (with the help of 500,000 peasants) built part of the Great Wall

Invaders in the north were especially problematic. After the First Emperor unified the country, he sent about 300,000 soldiers to the northern frontier to defend the border. Successfully completing that assignment, those troops (with the help of 500,000 peasants) built part of the Great Wall.

Using compressed earth, wooden planks and human energy, the builders made astonishing progress. They completed thousands of miles of wall within twelve years. Their creations survive, protected by the extreme dryness of the Gobi Desert, even though untold numbers of exhausted workers succumbed to the process. 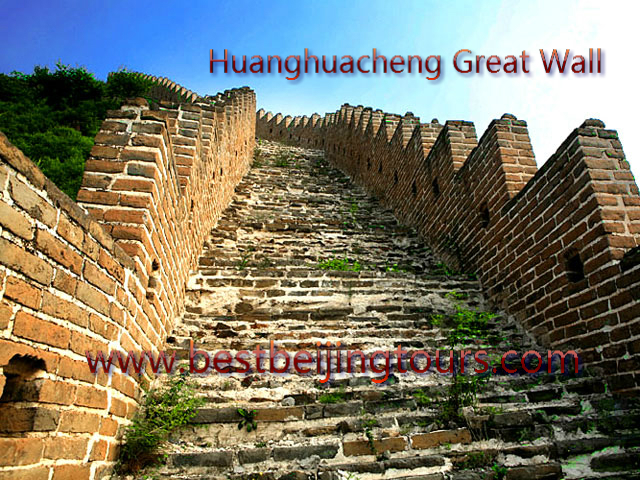 After causing so much anguish to so many people, the First Emperor died. Pent-up rage against him, smouldering for so long, was released three years after his death when rebels revolted. The impact of that short-lived peasant resistance made little difference to future emperors who continued to build sections of the Great Wall.

As the wall grew in length, there were insufficient troops to defend it. To make up for lack of manpower, soldiers used smoke signals to pass messages along the frontier. Remnants of the firewood, protected by the dry desert, survive. So do letters which workers left behind. Those old writings open a window into the lives of people who created a masterpiece two thousand years ago.

In addition to protecting China from invasions, the Great Wall allowed a Silk Road to develop. Traders, carrying goods into China along that road, also brought new ideas - like Buddhism. From those ideas flowed a new art form - religious statues - which people believed would protect them as they passed through the Jade Gate (the last part of the wall) and entered a fierce and unforgiving desert.

Blocked by China’s Great Wall, nomads like Attila the Hun turned west, to Europe. As the Dark Ages descended there, China flourished during its Golden Age. But times of prosperity and security come and go, and so it was with China.

By the early thirteenth century, a man named Temujen united the nomads and was crowned Genghis Khan - “Emperor of all Emperors.” (How he came to power, created a professional army and forged a nation out of so many disparate tribes, is an unbelievable story in its own right). Looking south, that fearless new ruler wanted China’s fertile land.

During the summer, dry river beds provided potential invaders with avenues into the land of the wall. With his great army, Genghis Khan attacked in the north, then decimated Beijing (annihilating those who would not surrender).  He ultimately defeated China.

Despite creating an empire four times bigger than Alexander’s, and twice as large as Rome’s, Genghis Khan died a sad man.  He’d believed it was his destiny to conquer the whole world.

By the time of his successor, Kublai Khan, the Great Wall was in disrepair. That is the reason why Kublai Khan’s famous visitor - Marco Polo - did not mention the wall in his reports.

When the days of Mongol rule over China ended, the Ming Dynasty wanted to protect the country from future invasions. The Ming Wall, built mostly of stone, was far more labor-intensive than a wall made of mud and brick. From well-positioned garrisons, along its route, an army of more than one million could be quickly summoned.

Convicts performed most of the labor on the Ming Wall. If they died, they were replaced by a member of their family, until the sentence was completed. Although some of the wall’s sections were built on uneven terrain or steep sloops, the country now had an extremely effective defense system. The Chinese believed the new wall would forever protect them, but in 1644 Beijing was destroyed by rebels. Thinking that a nomadic tribe called the Manchu could help, a Chinese general opened a Great Wall gate, letting in the country’s enemies. It was a terrible mistake, leading to the Manchu Dynasty.