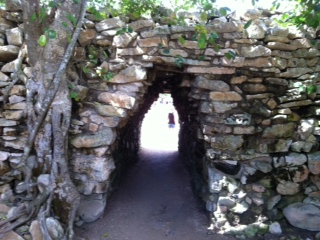 I'm one of those people who's got a thing for ancient ruins, especially in the Western Hemisphere - Aztec, Inca, Maya, Olmec, whatever; if it's pre-Columbian, bring it on. So when I was offered a chance by the resort chain Iberostar to pop back down to the Yucatan Peninsula's Mayan Riviera, including a visit to Tulum, I jumped at it.

After flying in from Miami the day the day before yesterday (just an hour and 20 minutes to CUN, aka Cancun); settling into the Maya Paraíso, one of the properties in the ginormous five-resort Iberostar complex about an hour south of the airport; and meeting/sharing a tasty on-property steakhouse meal with the other bloggers on our (in the group shot below,  Barbara Weibel/HoleintheDonut, Paul Steele/ BaldHiker, Mike RIchards/Vagabondish, J.D. Andrews, and moi) yesterday our merry band set out down the road to Tulum, which I've been to before but always love revisiting. 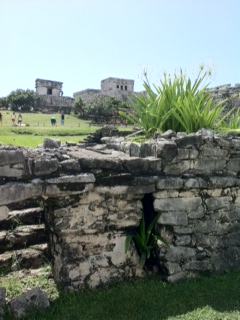 What's So Cool About Tulum

Actually, I’ve also had the pleasure and honor of visiting many of the Maya world's major discovered sites -- Chichén Itzá, Uxmal, Cobá, Ek Balam, plus ruins outside Mexico such as Copán and Tikal -- and I’ve found all of them incredibly impressive and evocative. But what gives Tulum its truly unique flavor and – well, “charm,” if you wanna call it that – is the fact that it doesn’t merely rise from the jungle or scrubby green bush, but enjoys a palmy, balmy setting atop a bluff 39 feet over the Gulf of Mexico -- the highest point in the Yucatan, so they tell me.

Dating to the 6th century AD, the Classic period of Maya history, and having its heyday several hundred years later in the Postclassic, Tulum wasn’t the biggest or most important town around – it was a trade entrepôt and port for the larger city of Cobá, 40 miles inland, so among other things it doesn't have big ceremonial pyramids, for example – but it does have a couple of unusual features – not only is it oceanside (with its very own beach!) and walled (today, visitors enter through a short, narrow tunnel (above right). And in today’s modern world, another thing that sets Tulum apart is that it’s the most easily accessible of the Yucatan’s Maya sites, within an hour or two down Highway 307 from the resort areas of the Riviera Maya and Cancun. On the down side, the place is often jammed with tourists -- especially because of its proximity to the Riviera Maya resorts near Playa del Carmen, it's a hugely popular day trip. If the area's ancient population reached a maximum of some 5,000, as the estimate goes, now this small subset of its elite gets that many visitors in a day during high season (yesterday, during low season, the guide told me a typical estimate would be a mere 1,500).

Those numbers come from  tour buses filled with resort and cruise ship day trippers, making Tulum one of Mexico’s most visited archaeological sites. So this fairly compact area can feel a tad crowded at times; furthermore, the volume of visitors relative to the size of the site also means a lot of the buildings have been roped off, unlike every other Maya site I've been, where you can climb and enter most of the structures. Still, taking a look around, I must say it's not all that hard to imagine what it might've been like in its heyday.

Another huge plus here is a gorgeous little beach with powdery sand and turquoise waters, reached via sturdy wooden steps, so after your dose of history you can take a nice little dip. Which I did -- extremely welcome after a sweaty, sunny pereambulation through the ruins. Funny story, though. As I delightedly rushed into the refreshingly cool water and low waves, suddenly I stopped short at something I almost ran into. "Oops, a jellyfish!" I thought, backing away. Then I took another look. Oops, not a jellyfish -- a used condom. A group of folks nearby who I'm guessing had already had a rubber run-in snickered at my discomfiture. I didn't stay in long after that.

And depending on when and how that condom was discarded - hey, who knows? Maybe in nine months or so the world will welcome a little chiquillo or chiquilla named "Tulum".... 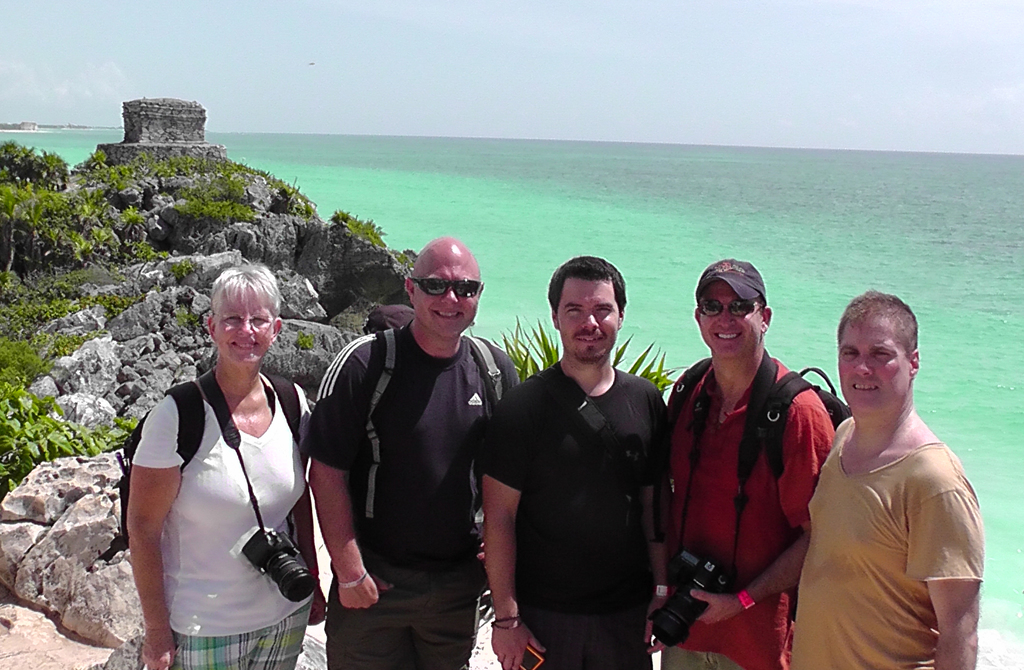 Sian Ka'an Biosphere Reserve, with its extraordinary wetlands, beaches, and Mayan ruins, is just a few miles away, so there's lots to see in this neighborhood. This album has photos (starting with the seventh image) from Sian Ka'an.