In the African bushes, Each and every species of animals have been found to have its own social organization. While some like the wildebeests would like to live in big herds, others prefer taking their time alone leading solitary lives. However, the zebras and elephants live in stable family groups and respect and maintain their strong family ties. Sometimes in this environment where survival is always for the fittest, several herbivores come together to form one big herd of mixed families. During this time, some members who are not very good at sighting danger from far feel quite at home because they know that nothing can go so wrong in the presence of other careful ones.

The factors that contribute to the characteristics and social life of a herbivore are determined by how vulnerable they are to predators, what they eat, their habitat and their general size at full grown up ages. This explains why wildebeests and buffalos which are rather unselective in their diet and spend most of their time on the grassland live in big groups to defend themselves from the predators.

The wildebeests for instance form large female groups and young ones with one adult male, responsible for the defense of temporary territories as they migrate from one point to another in search of vegetation.

Buffalos form large herds of females and young ones. Males may be solitary or in small bachelor groups however big families also have males for defence of the heard.

The elephants form family units called matriarch and live in home ranges with each and every unit led by fully grown female adults. The calves and cows spend time together. Their bulls form temporary loose groups although they remember each other and occasionally combine their family units to form huge groups. They mourn and respect any of their dead family members, one of their most sorrowful periods I have ever encountered during my safari trips to Samburu in Kenya.

Giraffes live in groups of both sexes with their juveniles congregating in kindergartens. They don't maintain their association and even the tie between individuals in these groups is always a loose and temporary one.

Rhinos are always poor at group living and spend most of their lives being solitary. Although they can form groups of up to ten or twelve, it is very temporary and no permanent leadership within a home range. The females live with one or two calves. 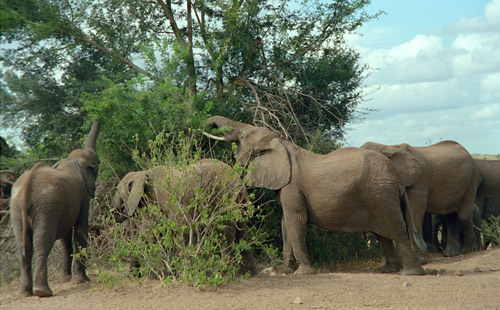 Elands are the African largest antelopes. Their males restrict themselves to particular home ranges but their females are more liberal and nomadic. They live in temporary groups of both sexes composed of all male groups but females live with their juveniles, at times forming kindergartens.

Zebras form groups which live in small home ranges at a go. Their families stay stable and put with one adult male being the leader taking care of several females and young ones. The rest of the males which are not strong enough to lead family units form bachelor groups. Zebras is part of the big groups that lead the way for migration of animals that enriches the Africa adventure tours to Kenya and Tanzania.

Holidays in Africa will as well give you a chance to see dik diks, some of the few animals known to be forming stable and lasting relationships. Each pair stays together with most recent young one and takes care of the small territory they live in. They are exclusive browsers and complete water-independent.

The gazelles are of three species which are all sociable. They form the main prey of many predators. The gerenuk has long limbs and neck which allows it to feed on foliage far away from others. The Thomson's gazelle is the smallest in size and mostly found grazing together with the impala-sized Grant's gazelle. Their males form temporary territories taking care of the females and juveniles. They form part of the easily seen plains game during the tours to Africa.

Waterbucks are most of the time found close to water and sometimes even flees to water for protection from the predators. They live in small herds consisting of cows, calves and one mature bull. Young bulls leave in separate herds form their families. They are mostly sighted next to the water bodies during Africa safaris.

Sable antelopes are fierce fighters and their males can kill a lion when attacked. Their females and young ones live in a herd. Males are territorial or form bachelor groups.