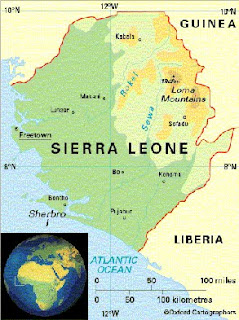 Situated in West Africa, with its pristine beaches, transparent seas, tropical forests, unique wildlife, historical heritage sites and most importantly friendly people, Sierra Leone (or Salone, as it is known to the locals), with Royal Air Maroc flights from £500, has great potential to become the next destination for those looking for new experiences and a friendly, relaxing atmosphere.

Once you have decided that Sierra Leone is your next travel spot, the next step is to decide on what to do on your stay in this fascinating country. The list of things to do is endless with so many attractions to pick from. This list below highlights a few of the possible options.


Markets
Sierra Leone is deemed the fishing ground of West Africa. For the fishing enthusiast this is the place to be. The markets in Freetown (the Capital) are vibrant and bustling as every trader looks to sell their produce.

Nature and Wildlife Turtle Island is a conservation society surrounded by a fishing community. Besides the fishing there are excellent opportunities for bird watching, with breeding colonies in the Western Peninsula Forest Reserve not far from Freetown.

Also found on the south-western coast of Sierra Leone is the Yawri bay located about 60km southeast of Freetown. Yawri Bay is home to tens of thousands of birds for a quarter period of the year. It also supports a major local fishing industry.

National Parks / Reserves
National Parks are many in Sierra Leone, and shelter an abundance of Flora and Fauna species. They are Kuru Hills, Lake Mape/Mabesi, Lake Sonfon, Loma Mountains, Outamba-Kilimi, Western Area. The Outamba Kilimi National Park has an interesting array of animals from the Chimpanzee to Savanna Buffalo to Leopards. It is also an excellent spot for bird watching.

There are also a few wildlife Sanctuaries, which aim to protect endangered species of wildlife and plants. These include Bo Plains, Tiwai Island, Tacugama Chimpanzee Sanctuary, and nature reserves such as Bagru-Moteva Creeks, Bumpe Mangrove Swamp, Kagboro Creek (Yawri Bay), Kpaka-Pujehun, Sewa-Waanje are also a must-see.

Some nature reserves in Sierra Leone are strictly non hunting nature reserves and forest reserves. These are: The Kambui Hills Forest Reserve is situated about 300 km south-east of Freetown with the second highest peak in Sierra Leone, the Sankan Birriwa. The scenic nature would be very appealing to visitors and scientists with over 200 separate species of birds.

Tingi Hills Forest Reserve also a non-hunting reserve is located close to Sierra Leone’s eastern border with the Republic of Guinea. The Tingi Hills is the easternmost mountain range in Sierra Leone. The forest reserve includes two peaks separated by a narrow gorge. Both peaks stand over 1800m, but the northernmost which is 1850m high, is the second highest in Sierra Leone.

Beaches and Islands
The Banana Islands are the location for interesting historical facts like the firing point and four guns near the old wharf at Dublin and the two old Tombstones in the cemetery also at Dublin. You can also enjoy lobster, fish or chicken for lunch before heading back to Freetown.

The west of Freetown is mainly residential and further west (South-West) you will find some of the country’s most beautiful beaches. Like the Freetown Peninsula which is bestowed with breath-taking beauty.

As tourism is still developing in Sierra Leone these beaches remain in pristine condition. Other beaches include Lungi Beaches, Shenge, Sulima, Sherbro Peninsular, and Turner’s Peninsular.

Historical and Heritage Sites
Sierra Leone also offers attractions that cater for those who are interested by historical facts. Remnants from the early colonial eras are still present in the country.

The Sierra Leone national Museum is the home of the ‘Ruiter stone’, the main attraction of the museum. The replica of a 1664 rock graffito, scratched by bored Dutch sea captains during a lull in a military expedition against the English, was discovered in the course of drainage work on the waterfront in 1923. It stands as the oldest archaeological evidence of a European presence in the strip of land.

Old Fourah Bay College located in Freetown stands as the oldest university in West Africa having the likes of Samuel Ajayi Crowther, as the college’s first student and the first African Anglican Bishop from Nigeria.

The St John's Maroon Church was erected by the Maroons in 1822, who arrived in the colony in 1800 as those returning from Jamaica. It is among the oldest churches in Sierra Leone. It stands between current day Liverpool Street and Percival Street.

The Gateway to the Old King's Yard: When Sierra Leone became a British Colony and the abolition Act had come into effect, the Navy were deployed in trying to stop the still on-going Slave Traffic. The rescued slaves where landed at King Jimmy Wharf and taken to a compound constructed for them. This site was referred to as the King’s Yard. Popular figures to have passed through ‘The Asylum’ include Samuel Ajayi Crowther and John Ezzidio.

Bunce Island was the largest British slave castle lying on the Sierra Leone River of West Africa. Founded around 1670, it exported tens of thousands of African captives to North America and the West Indies until it was closed it down in 1808.

And these are just the tip of the iceberg when it comes to the appeal that Sierra Leone has, and the potential it shows as a popular destination for those seeking new experiences and a friendly, relaxed atmosphere. For more information on the things to do, visit and see in Sierra Leone, visit the Sierra Leone National Tourism Board website.

West Africa Discovery is currently in talks with ground tour operators and other tourism suppliers in Sierra Leone in order to be able to compile a database of tours, accommodation and voluntourism projects which have implemented or are in the process of implementing policies which reflect the Cape Town, Kerala and the recent Belize declarations on Responsible..., and subsequently list them under their Responsible Tourism ‘Holidays’ pages.