The Magnificent Cathedral of Siena, Tuscany


Sometimes overshadowed by Florence, Tuscany's equally ancient city of Siena is also an astonishing trove of history, art, and architecture, and its centerrpiece is the Cathedral of Our Lady of the Assumption (Santa Maria Assunta in Italian), commonly called the Duomo di Siena.

The origin of the cathedral is rather uncertain. According to tradition, on the top of the hill the first small church, dedicated to St. Boniface, was built in the heart of the Roman village Castelvecchio. In the 9th century, it was renamed in honor of the Virgin Mary The dome was completed in 1264, and the lantern, built in 1664, is surmounted by a golden copper ball with a cross, dating back to 1385.

In 1280, architect Giovanni Pisano was responsible for renovating the façade - a project which stretched on into the 14th century, during which the facade went under several revisions. The cathedral has three naves and a bell tower, however, in 1339, the building was still considered too small, so was expanded with the ambitious dome, a perpendicular extension to the side wall on the southeastern side. Due to several issues, including the plague that hit Siena, the work was interrupted for a long time.

Work on the main façade restarted in 1376 under the direction of Giovanni di Cecco. Its sculptures were replaced in the 19th century by copies, and the originals are preserved at the cathedral museum, the Museo dell'Opera del Duomo. 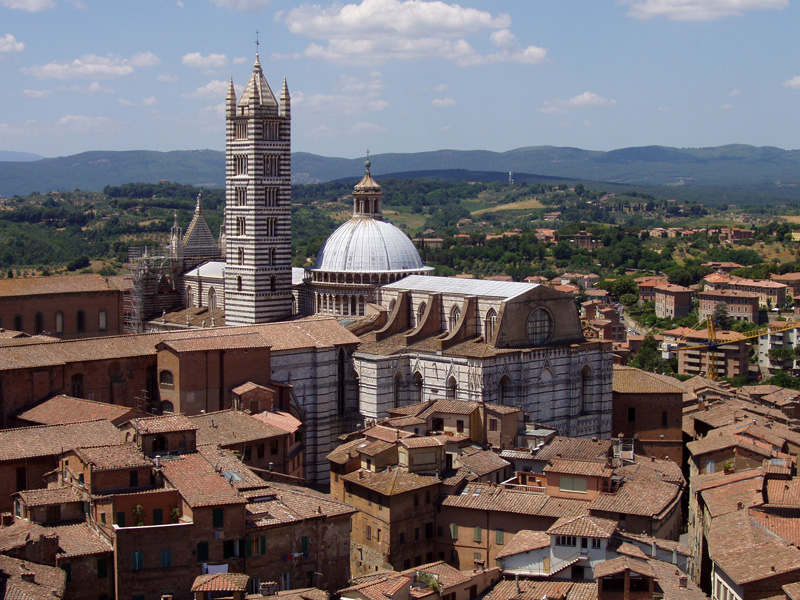 The Siena Cathedral is a true masterpiece of Italian Gothic art, and soon became one of the most famous symbols of the small Tuscan city and of the whole region. It also be pointed out that the Siena Cathedral offers the most spectacular interiors you can see among other famous cathedrals of Tuscany.

Just like many other Tuscan churches, the Siena Cathedral is a complex of buildings for which is convenient to plan the visit in advance, in order to avoid the crowd and the queues. You can visit this magnificent church alone or taking advantage of a guided tour of Siena.

In addition to enjoying the view of the wonderful main facade of the Duomo and the beautiful interiors of the building, you can visit the St. John's Baptistery, a semi-hidden space on the north facade of the temple, see the Cripta wall paintings that are have recently been brought to light.

You cannot miss the Cathedral Museum too, and of course, get to the top, where you can enjoy a great view of the city.

I enjoyed revisiting Siena with you. FYI, Siena isn't just "equally ancient" compared with Florence; what distinguishes it is that much of it is from the Middle Ages, whereas Florence is a showcase for the Renaissance, which came after the Middle Ages. And that cathedral in Siena! Where else, except maybe on a lawyer, can you see such pinstripes? Ciao!