In Spain as in much of Europe, church attendance may have waned of late and society modernized in many of its attitudes, but culturally it's still one of Europe’s most Catholic countries — perhaps never more so than during Easter week, a bigger deal here since the Middle Ages than in almost any other place in the world…   If you’re lucky enough to witness Semana Santa (Holy Week), as Spaniards call this time of year, you will find that many people take the entire week off as a holiday, and many others take to the streets in scores of cities and towns from Palm Sunday through Easter Sunday and Easter Monday (this year, March 29-April 6).

For the most part, the elaborate processions and ceremonies involved in Semana Santa pageantry are dominated by cofradías (lay fraternities) whose members, the nazarenos, march in multi-color, pointy-capped outfits (which are actually disturbingly reminiscent to Americans of Ku Klux Klan getups). While common all over Spain, the more over-the-top festivities tend to be found in Andalusia; Seville's (above) is probably the biggest and most elaborate of all, with the streets of the old town thronged from Palm Sunday to Easter Sunday, and the highlights being the processions from the evening of Holy Thursday through the dawn (madrugá) of Good Friday.  One of the distinctive features in Seville are the pasos, like wooden floats with religious scenes, but carried not by vehicles but by squads of dudes. Málaga (below) also puts on a particularly spirited show this week, with similar processions featuring floats called tronos (thrones), and other famous ones include those of Murcia and Cartagena, next door to Andalusia on the Mediterranean coast. 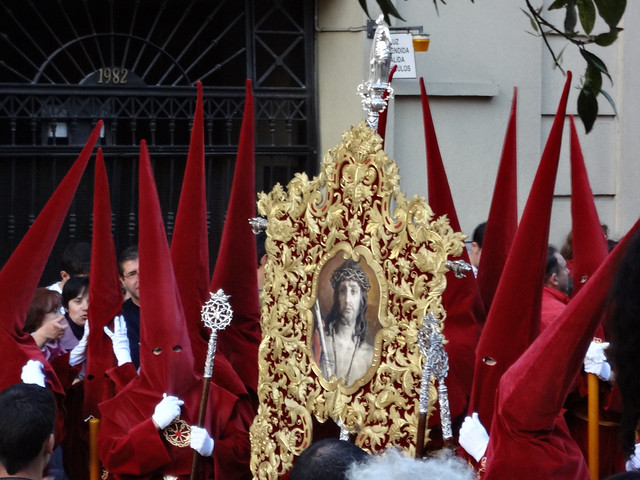 Semana Santa is also particularly big in a number of localities in Castile and León, especially Valladolid, León, Salamanca, Ávila (top), and Zamora, the last of which is the oldest procession of penitents documented in Spain, dating back to 1179 – not surprisingly, this one preserves a particularly medieval feel. And by the way, two weeks after Semana Santa, many Andalusians start all over again with the splendid, equally traditional Feria de Abril in Seville (yeah, between one thing and another, not all that much gets done in Seville this month, actually).

So yes, there’s no question that spring arrives with plenty of pomp and circumstance in Spain. Consider the foregoing just a tiny introduction – honestly, it’s hard to adequately convey the amazing spirit and atmosphere of these cities during these age-old rituals and celebrations, but if you want to get to the heart of traditional Spanish culture, I highly recommend getting over here to witness one at least once in your life. If you’re interested in looking into it next year, Palm Sunday gets things pomping and circumstancing on March 20.