Seals at the Children's Pool in La Jolla, California 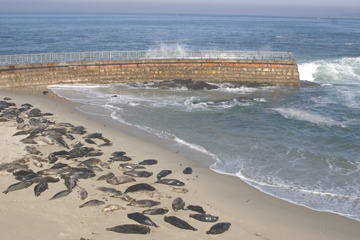 What to do in La Jolla, California? The most popular free activity in the village - especially if you're traveling with kids - is visiting the seals at The Children's Pool. The rope barrier that went up here recently indicates the beginning of the pupping season for the colony of harbor seals who call the cove home.

While the pups aren't usually born until March and April, the rope keeps onlookers at a safe distance from the rookery while the seals are most vulnerable. All onlookers, that is, except for the beach-use advocates who insist on swimming in this area despite the fact that the water is contaminated. The pro-seal advocates believe that this action constitutes illegal harassment of a federally protected species.

City officials are seeking a permit from the California Coastal Commission to leave the rope up permanently instead of just during pupping season, but for the time being it goes up in December and comes down in May. The seals cope by just sliding into the water and going for a swim when the humans become too bothersome.

The seals have been in the area for decades, but no one paid much attention until their numbers became significant. The anti-seal people are primarily long-time La Jollans who learned to swim at The Children's Pool and would like to see their children and grandchildren have the same opportunity. In 1931 philanthropist Ellen Browning Scripps gifted the sea wall that encloses the cove so that La Jolla kids would have a safe place to learn to swim.

But that was then and this is now. The Children's Pool Beach is 130 feet long and San Diego offers 70 miles of coastline. The rookery is the only mainline harbor seal colony in Southern California south of Carpinteria.

This area of San Diego's coast is naturally rich in sea life and has been declared a marine sanctuary. At this time of the year, gray whales can be spotted off shore as they swim south to give birth in the warmer waters of Baja California, Mexico.

In addition, sea lions have taken up residence at the nearby La Jolla Cove where long-distance swimmers work out year round. They are joined by huge flocks of pelicans, the ubiquitous sea gulls, and significant numbers of cormorants.

If you visit with your family, the kids may notice that the various animal species get along just fine.

La Jolla is 12 miles from downtown San Diego. Click here to find out how to get to La Jolla from San Diego.