Santo Domingo's Columbus Lighthouse Is Quite a Sight 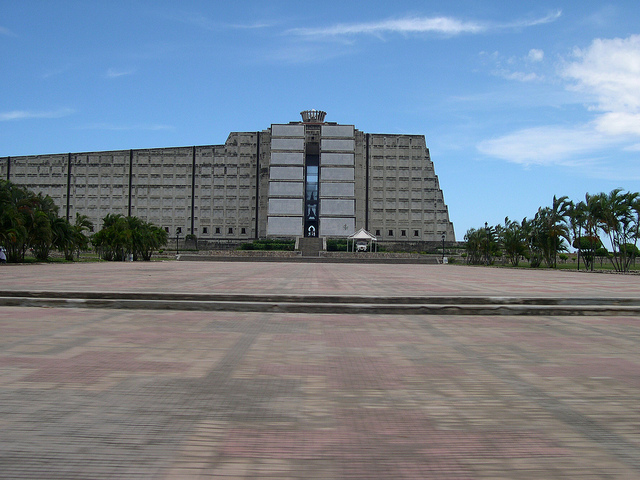 Due at least in part, no doubt, to the modest size of most Caribbean islands, “mega” structures are fairly few and far between. But one of them is here on the eastern outskirts of the Dominican Republic's capital: the massive (if not downright bombastic) Faro a Colón (Columbus Lighthouse), finished in 1992 for the 500th anniversary of the voyage that, by stumbling onto this island, launched the exploration and colonization of the Western Hemisphere.

Six-hundred eighty feet long and ten stories high, this cross-shaped concrete hulk in Santo Domingo's Mirador del Este Park holds a library; exhibits, relating to Columbus and various countries of the Americas, some nautical objects; and a frilly marble mausoleum which supposedly contains at least some of the explorer’s ashes and bone fragments (recent DNA test suggested that some are in the cathedral of Seville, Spain, but the Dominicans haven’t allowed testing of the remains here). On select nights, they switch on 157 laser beams that shoot upward into the sky, also in the shape of a cross.


Actually, for more than a few Dominicans the Faro's more notorious than beloved. The design, by a Scottish architect, dates back to a 1929 competition, but lack of money and shifting priorities delayed significant construction until the presidency of Joaquín Balaguer. Many felt that the huge amount of millions poured into this one project could’ve been better used in a poor country like the DR, and furthermore, the rep of Christopher Columbus hereabouts is ambivalent, to say the least – dignitaries still show up at the Faro each October 12 to honor Columbus, but many other locals use Colón as a swear word or even refuse to say his name altogether, fearing a curse known as a fucu that can bring disaster. But anyway, is it worth your time to visit? Depends on your tastes, and how much time you have available in Santo Domingo. But the monumental Faro a Colón is undoubtedly part of Dominican history, and certainly quite a sight.