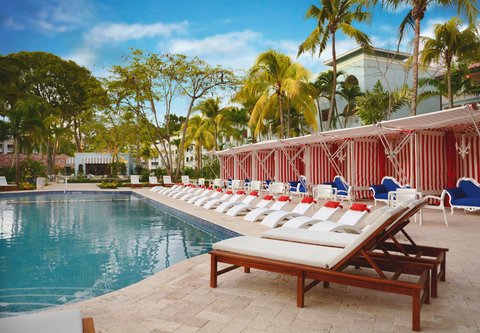 Im headed down to this island in 22 hours! Super excited to report all about this elite resort. This resort is poised to be one of the most upscale in the group of 15 all-inclusive resorts.

Its 280 rooms range from beachfront suites serviced by butlers to new-to-the-brand swim-up suites spaced along a river pool. Furnishings include mahogany four-poster beds and deep soaking tubs both inside bathrooms and outdoors on terraces.

Amenities include 11 restaurants, among them a steakhouse, Japanese grill, French brasserie and Sandals’ first Indian restaurant.

Some fun facts:
- The name 'Barbados' is derived from the Bearded Fig Trees once found in abundance on the island.
- Barbados is the birthplace of Rihanna, who moved at the age of sixteen to pursue her music career.
- The island is surrounded by the Atlantic Ocean
- The first slaves in Barbados were white (called indentured servants).
- The island has always flwo on ly the British Flag, until achieving its independence in 1966.