Northern California offers some of the USA's loveliest road tripping, with scenic views, great beaches, beach towns and state parks as well as attractions such as the Monterey Aquarium and the Carmel Mission. One particularly appealing stretch is the 122 miles (196 kilometers) between San Francisco and the town of Carmel along coastal Highway 1. You can drive it in a little over two hours, but there's so much to see and do along here that you could easily spend a week stopping to enjoy its many fantastic places (especially state parks like San Mateo Coast Beaches, Pigeon Point Light Station, Año Nuevo, Wilder Ranch, Natural Bridges, Santa Cruz Beaches, Seacliff, Sunset, Zmudowski, Moss Landing, Salinas River, Marina, Monterey, Asilomar, and Carmel River.

Keep in mind, by the way, that the weather in the area changes quite a bit, strong winds are common (water- and wind-proof clothing is recommended), and temperatures can be cool. And with that said, here are some of my favorite highlights along the way:


Located close to both San Francisco and Silicon Valley, Half Moon Bay provides scenic roads, ocean views, golfing, fishing, horse back riding and much more. In the area there are several beaches, including Moss and Pigeon Point Beach, as well as great trails such as Gray Whale Cove Trail and Coastside Trail. One of the famous sights in the area is the Pigeon Point Lighthouse, one of the tallest in the US, now home to a hostel.


With a laid-back surfer vibe and famous for its boardwalk and a wide range of watersports such as wind surfing, Santa Cruz (pop. 63,000) also has a great downtown for restaurants, shopping, and entertainment. Fantastic for an overnight or longer! 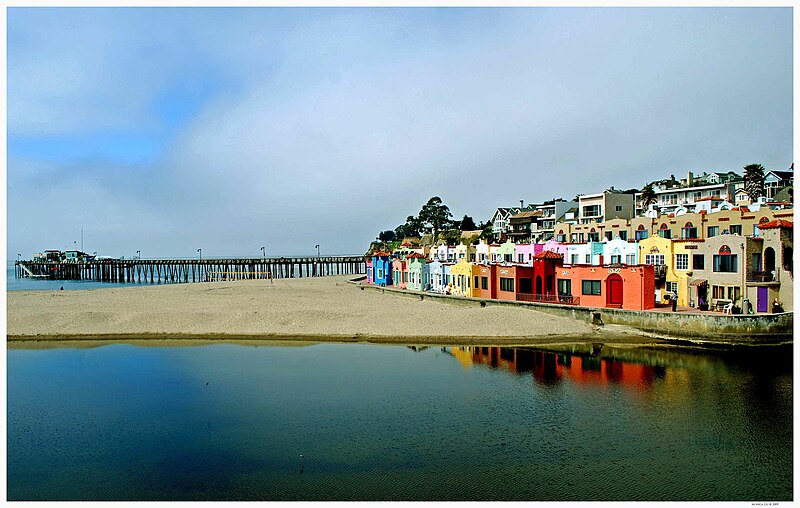 
A small village just south of Santa Cruz along a wide beach, it offers great views, craft and art galleries, boutiques, and charming beachfront restaurants. New Brighton State Beach, an almost 100-acre park with picnic areas, fishing, a beach and camping ground, is one of the most visited in California. 
This city of 28,000 is especially notable for its historic downtown, Old Monterey, which is a state historic park with some 55 sites dating back to the days in the 18th and 19th centuries when it was the capital of Spanish and then Mexican Alta California. Another major attraction is the Monterey Aquarium, part of the reknowned Cannery Row area made famous by the novels of John Steinbeck. On the way here, by the way, you'll pass by Seacliff, Sunset, Zmudowski, Moss Landing, Salinas River, and Marina state beaches; all are great for picnicking and fishing, but only Seacliff and Moss Landing lend themselves to actually getting into the water. 
A hop and a skip north of Monterey, this charming town of some 16,000 is known for its Victorian houses (many of which are now bed and breakfasts), boardwalk, and bucolic area such as Asilomar State Park. 
One of the most famous destinations along this route is an unincorporated community that's long been a resort destination for the well heeled, especially famous for its seven golf courses, such as Cypress Point Club, Monterey Peninsula Country Club, and Pebble Beach Golf Links, as well as the scenic 17th-Mile-Drive, meandering along the beaches and forests between Monterey and Carmel. There's a $10 fee to enter the area.


With a population of less than 4,000 and famous for its great beach, amazing homes, artsy vibe, and nice downtown area anchored by Ocean Avenue, Carmel is for many the perfect beach town to spend a day or two. It has a rich history, colonized by the Spaniards in the late 18th century, and in fact is home to one of California's most famous and beautiful Spanish missions, San Carlos Borromeo de Carmelo, which is still an active place of worship as well as site of many cultural events and activities. The 97-acre (120 hectare) Carmel River State Beach just south of town has a mile-long strand and is popular with hikers, kayakers, and birders attracted to its fecund lagoon.


Two miles south of Carmel, this reserve is widely considered the "crown jewel" of California's state parks. Highlights include Pinnacle Point, which you can reach through the Cypress Grove Trail; Headland Cove; Sea Lion Point Trail to Sea Lion Rocks, where you can see barking sea lions; and Whalers Cove, great for scuba diving as well as home to a history museum covering the commercial whaling the 19th century; you can still spot gray, humpback, and blue whales at certain times of year during their offshore migrations.