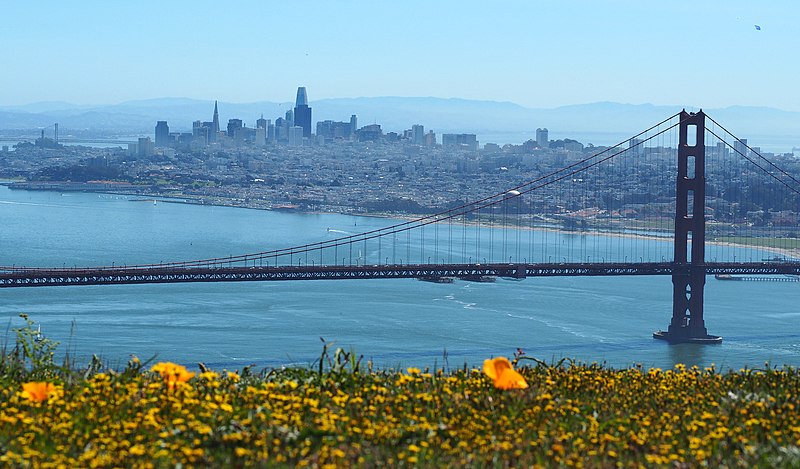 One of the United States' most iconic cities is a mix of many cultures and tendencies - for example, European and Asian, corporate and bohemian - and offers visitors an exciting menu of sightseeing, dining, shopping, and nightlife. For first timers, here are some places and dishes not to miss in the City by the Bay.

When it opened in 1937 connecting San Francisco and Marin County, this six-lane suspension bridge (top) was picked by the American Society of Civil Engineers as one of the seven wonders of the advanced world, because of its innovative design, supported by a link extending across two pinnaclees, which can be seen peeking out of SF's frequent, famous fog. Its silhouette and orangish hue have helped make it the single most recognizable icon of this city.

Frequently dubbed "the Rock," this small island was first developed as the site of a lighthouse and military installation, then an infamous jail which operated from the early 20th century till 1963 and housed some of the USA's most famous criminals, including Al Capone, Alvin Karpis, Whitey Bulger, and Machine Gun Kelly. Surrounded by the freezing waters of San Francisco Bay, Alcatraz was thought to be impregnable, and no successful escapes were ever recorded. Today it's open to visitors under the management of the U.S. National Park Service.

On San Fran's northern waterfront, one its most popular tourist destinations has its origins in the mid-19th century when Italian fishing families settled here, and is still a hub of  the city's Little Italy. Today it's known for its shops, eateries, and attractions including wax and mechanical museums, a Ripley's Believe It or Not, Pier 39 (below), and the San Francisco Maritime National Historical Park, which includes a 19th-century sailing ship and a World War II submarine. You can also catch boat excursions out of here through the bay and to surrounding day-trip destinations.

The city's single most visited site offers a variety of fun in terms of dining (chowder bread bowls and California wine, anyone?), shopping, and attractions, as well as pciture-postcard views out toward the Golden Gate, Alcatraz (below), Angel Island, and the city skyline. One notable attraction here is the Aquarium of the Bay, and another is a much photographed colony of sea lions.

Part of the onetime Presidio military base, now the Golden Gate Recreation Area administerd by the National Park Service, this mile-long stretch begins just south of the famous bridge and offers fantastic views of it (great Instagram terrirory, for sure). The currents and rip tides make Baker Beach unsuitable for swimming, but it's still popular for sunbathing (including, along one section, nude sunbathing).

San Francisco cheesecake arguably matches New York's in quality and taste yet is lighter, more akin to a soufflé. Enjoy it at establishments such as Stella Pastry & Café, Schubert's Bakery, and Mister Artisan Cheesecake. Delish!

Fished along the West Coast (and especially in the Pacific Northwest, named after a spit in Washington State's Straits of Juan de Fuca), this Pacific crab harvested beginning in late November. You can find it in myriad forms - crab cakes, bisque, oven-roasted, grilled, steamed, in salads, and with pasta. One reliable local eatery to enjoy it is Swan Oyster Depot.

This hearty seafood stew was invented here by Italian-American fishermen in the 1930s. Starting with a seasoned, garlicky tomato-white wine broth, it adds mussels, crab, squid, shrimp, and pieces of thick fleshed fish like halibut. Places to find it include Cioppino's near Fisherman's Wharf, Anchor Oyster Bar in the Castro, and Sotto Mare in North Beach.

Anchor Brewing was the USA's first craft brewery, established by German brewers several blocks in from the waterfront in 1896. The "steam" in the name harks back to when brewers worked in crude conditions, utilizing the cool environment of San Francisco's roofs in lieu of ice to cool the the warm fluid, which would steam when exposed to the night air. Today visitors can get tours and tastings of the historic brewery, and of course order these suds all over town.

This being California, Mexican culture and cuisine is omnipresent in San Francisco, and burritos are a local favorite. There's a lot of friendly competition but the pick of the crop is generally agreed to be the carnitas burrito at La Taqueria in the Mission District, a riceless marvel loaded with pinto beans, salsa, cheddar, sour cream, guacamole, and of course exquisitely seasoned, crispy yet moist pork carnitas. Other top burritos can be found at El Farolito (also in the Mission) and El Castillito in the Castro.

There's quite a bit of air service to SFO, including cheap airlines; you will also find SFO to Delhi Singapore Airlines if you are coming from Delhi and looking for round trip flights.