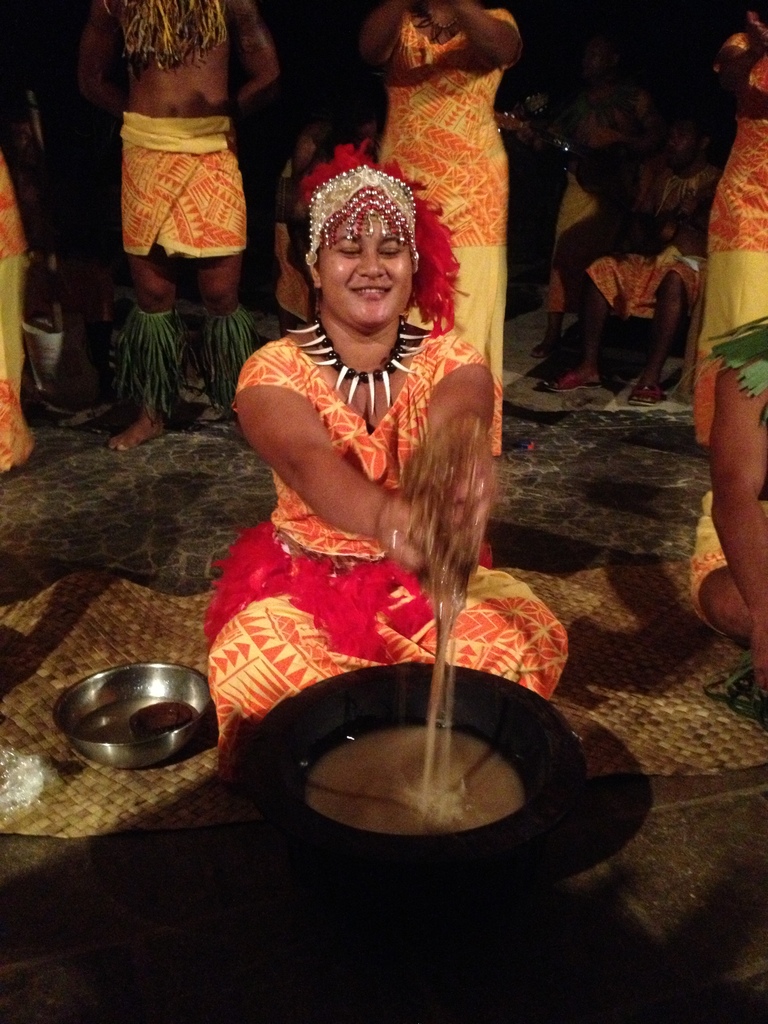 A postcard of natural beauty, Samoa won the heart of Bev Malzard on a short break holiday.

It wasn’t quite love at first sight, but a slow feeling of affection growing as I came to know Samoa. After an early (before dawn) arrival at Faleolo Airport to the sound of local singers – and I’m always a sucker for a pretty song – we headed south cutting through the island of Upolu Island from north to south.

Driving through the dark, the soft twilight quietly emerged and we could see the shapes of Samoa come to life. There were lawn verges, clipped to submission and gardens along the way surrounding neat houses. The gardens are brilliant, and I started to get the feeling that there was going to be a big sign, that was authentic saying: ‘This is a tidy town’. It’s more than tidy, there’s a trimmed and tender pride here in the immaculate gardens and in the local homes.

Next emerged people treading purposefully along the side of the road, mostly solo pedestrians. Off to work, to who knows where. Obviously no public transport this time of day and not a lot of vehicles to be seen at all. Little pigs foraged on the grass verge and next came a herd of chooks crossing the road. Why? I don’t know.

Then we swerved to avoid colliding with three horses having a talk and a nod in the middle of the road  . . .

As the sun rose the gardens became bright shiny, coloured displays with luscious green, borders of fat leaves waving in the breeze. The walking workers waved and I was getting a feel for the place. Not love yet, but my heart did miss a beat as we turned off the road to drive into Coconuts Beach Club, Resort and Spa. I could see the beach, the white sand the waves . . . and knew I was exactly where the universe had planned for me.

The resort manager had to be woken up (as it was only 7am) to meet us, and he shuffled down to see us wearing a sarong and a welcome smile. We grabbed a key and began our walk along the beach to the sound of waves tumbling to shore beside us. There are six over-water fales here and we had the first off the pier walk. A great spacious, light and air filled habitat that sighed and coaxed us to ‘chill out and wind down to Samoa time’. There’s a glass panel in the living room to watch the fish swim near the pylons and there’s even one in the toilet – excellent viewing too.

That’s when the first sleep occurred.

Later, we walked up for a late breakfast and then off for a bit of tiki-touring round the island. We drove past small nuú (villages) and the local architecture has a separate structure from the family fale (house). There’s the meeting house for friends and relatives for family affairs and local discussions and that’s the fale tele. The gardens continue to impress and there’s not a lawn that’s out of control.

We head to a wonderful nature reserve where the incredibly photogenic To Sua Trench is. To Sue means a Giant Swimming Hole, and it is. A ladder is installed at the top of the hole for access to and fro into this delightful 30m deep seawater pool. Surrounded by manicured gardens, the site is for swimming, nature photography and for finding a shady tree to picnic under. From the cliff at the gardens you overlook the ocean and the beach called Fagaoneone (meaning white sand). I think I got the hang of the language just by looking at things! Opposite from where we stand is a lava field with a blow hole, tide pools and walking paths along the rocks near the edge of the ocean.

We slowed down further to have lunch at Lalomanu Beach – named in ‘Lonely Planet’s top 10 must see Beaches in the World’- and it lives up to its name.

Back to Coconuts using the last of our energy to wave at a line of giggling kids walking by the road – and then it was the start of the Samoan Holiday Tradition (SHT) lunch, sleep at 2.30pm, and swim at 4.30pm.

Pristine, crystal blue water lagoon for swimming – doesn’t get much better than this.

Next day: Saturday is a busy time on the island as Sunday – the island shuts down to observe the Sabbath.

We drive to Apia Town, where everyone is out and about, shopping, talking, and stocking up for tomorrow’s big family lunch. We mooched through Savalalo Flea Market to buy a few trinkets and inspect the vibrant shirts on display. Outside the markets, the local busses were lined up to ferry folks back to their village. The busses are the stars of the road! Brightly coloured rattlers that have individual designs and slogans – I hope these crazy vehicles never disappear to be replaced by modern, boring transport.

Before lunch we checked out a produce market and bought fresh coconuts, already top chopped for fresh milk.

You can’t be in the region or town without paying a visit to Vailima, the former residence of Robert Louis Stevenson. And what a charming experience this is – the airy rooms still have the lingering presence of a relaxed colonial family’s life here. The caretaker gave me an enormous hug when I arrived and a longer one as I departed – very friendly.

The museum has many artefacts, personal possessions and mementos of Stevenson’s life and literary history. Scotland’s son found peace here to temper the effects of tuberculosis and also his restless spirit was quelled once he arrived in Samoa – like me, and thousands of others, he fell in love with the place.

Robert Louis Stevenson was buried on top of Mont Vaea behind the homestead – where he longed to be laid to rest. His coffin was carried to the top of the mountain by his Samoan friends. If anyone tells you that it is not a hard climb – don’t believe them.

On the summit of Vaea Hill, surrounded by dense forest, is the tomb of Robert Louis Stevenson. The world famous lines of the Requiem written by Stevenson are on the bronze plate on the coffin: —

Back to Coconut beach for SHT.

That evening with international guests at dinner with us, we were entertained at a Fiafia night – with singing, dancing and the kava ceremony for all to taste. I let the cup near my lips but that’s as close as kava got to me. It’s just not my cup of tea!

To check out before dawn to get an early flight was not only difficult but quite sad. Once you’ve fallen in love, you want it to pan out for longer than three days . . . but then again, Samoa is in my heart until the next visit.

And for all things Samoan, visit: www.samoa.travel and email: info@samoa.travel