On my first day, my local friend Carolina took me to the cathedral, where she showed me the figure of a 'monkey eating an ice cream' among the carvings around the door. It didn't look like a monkey, though ... more like a chimera dreamed up by a computer games designer smoking some serious stuff. And, what he was holding may have looked like an ice cream cone to some, but to me, it looked like ... well, I'll leave it to your imagination!

But what was this? Among the carvings around the door was a helmeted, space-suited figure!! Carolina explained that the figure of the astronaut had been added during renovations in 1992, to commemorate the 500th anniversary of the Columbus' first voyage to the Americas. 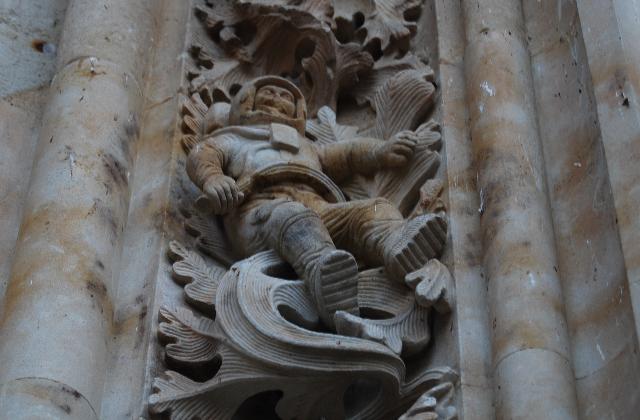 Then, we went to see more carvings, this time at the famous University of Salamanca. If you can find a frog, said Carolina, you will pass all your exams (I wish I'd known that fifty years ago!) The frog did take some finding ... I only got it with the help of Carolina and the zoom lens on my camera.

However, when we visited again a couple of days later, Carolina’s husband, Carlos said that was not the frog. But, he wouldn't say where it really was.

The centre of any Spanish city is usually the main square, often called the Plaza Mayor, and Salamanca's is a particularly magnificent one. I knew something about it from a podcast I’d listened to just before I left. According to the person being interviewed, the young folk of Salamanca used to take their paseo (evening stroll in the plaza).

The boys would walk in a clockwise direction, and the girls anti-clockwise. If a boy saw a girl he was attracted to, he’d say ‘queso!’ (cheese). If the attraction was mutual, the girl would reply ‘quesito!  (little cheese). Unfortunately, the podcast didn’t say what happened next. In any case, when I was there I saw no evidence of this going on. 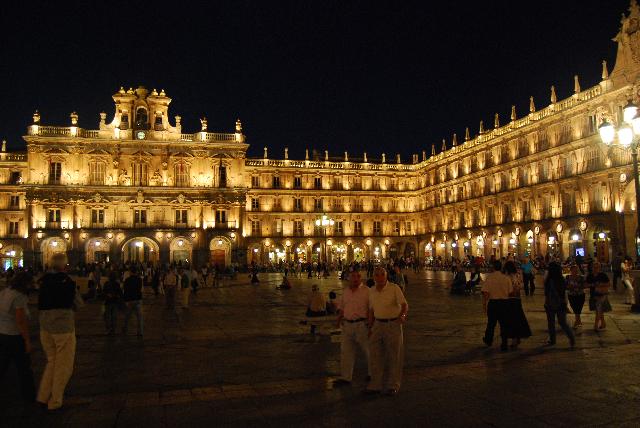 Just by the plaza is the mercado, the covered market. Markets are usually a treat for the eye or the lens, and this one was no exception, especially as it’s situated in a lovely Art-Nouveau building.

Among the many items for sale was a local speciality, hornazo. This is a meat pie made with flour and yeast and stuffed with pork loin, chorizo sausage, and hard-boiled eggs. But, I didn’t try any, for it doesn’t come in ‘individual’ sizes, and is by no means ‘street food’; you need to take it home, warm it up and find three or four friends to share it with.

Early one morning, I was out on a photographic sortie, and called at a churrería, where I had an early breakfast of chocolate con churros … this is how some Spanish people like to revive in the morning after a night’s partying. It consists of a mug of seriously thick drinking chocolate, into which you dunk a sort of stick of fried doughnut stuff. 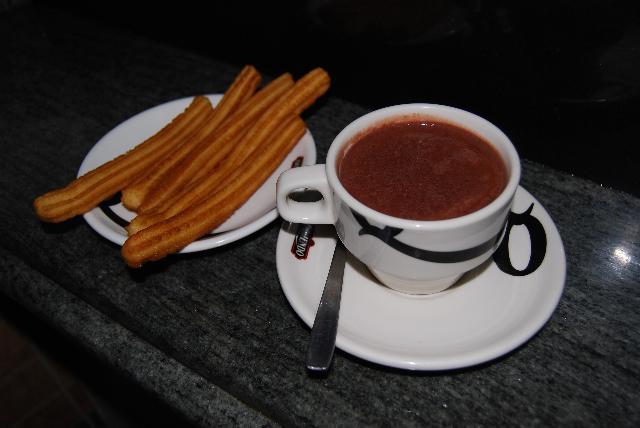 Suitably refreshed, I walked farther down the street to the Puente Enrique Esteban, which is as magnificent as it sounds, and I reflected it’s a good thing it wasn’t in England … ‘Harry Stevens Bridge’ just doesn’t have the same ring to it.

There’s parkland all along the banks of the River Tormes, and heading west brings you to the Puente Romano, the Roman Bridge.

This is in really good condition, probably because it’s now a pedestrians-only bridge. With its many arches and paved surface, it’s a magnificent thing in itself. But, it’s also a great place for photographs of the city … especially at dawn 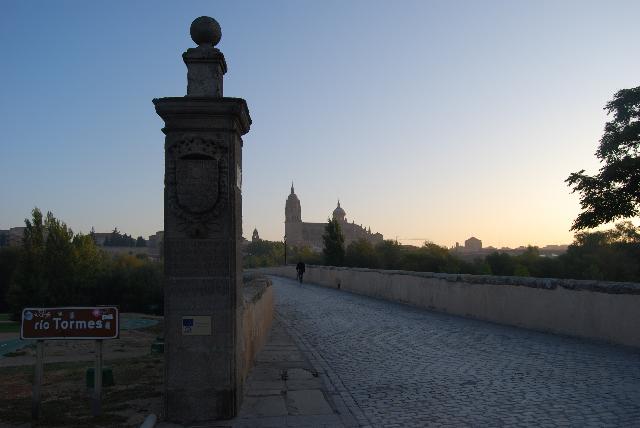 On the north bank, midway between the two bridges, the Art Nouveau frontage of the Modern Art Museum stands high on the old city wall. I’d made a note to visit but, whenever I passed, the gates were firmly locked … and it wasn’t until too late that I discovered the ‘frontage’ was actually the ‘backage’, and the entrance was in another street. Beautiful city, I'm yet to go there or cover it on my site but the architecture looks amazing.. so does the churros and chocolate to be fair :-)