Almost since the dawn of recorded history, Man has been crossing the Aegean Sea by boat, and this remains the best way to do it. We could paraphrase the words of Jean-Jacques Rousseau: ‘If you just want to get there, you could fly, but to travel, you must take a boat’

There are boats of all description plying this sea, and I’ve sailed on a lot of them. The one that the island people themselves use, as well as the tourists, is the ferry. Most of these leave the Greek mainland from the port of Piraeus. It’s a big port, and, since Greece has many islands, there are many ferries, and looking for the one you require can be quite a chore.

Don’t ask at a ferry company office; they will only tell you about their own ships, and disregard those of other companies! I once spent a weekend on Leros, because a ferry company told me there were no boats until Sunday night. There were, but not from that particular company! However, I couldn’t take too great an exception; my flight didn’t leave till Monday afternoon, and I’d rather have spent the time on Leros than in Athens.

For real information on all ferries, visit

www.gtp.gr, a website which tells you about all services … although it doesn’t tell you how to find your ship at Piraeus.

Unless you’re prepared to pay a premium price, the accommodation is fairly basic. If it’s an overnight trip, you’ll probably share a cabin with three other people, or even sleep in your seat. That’s an option often taken up by youngsters, who want to see as much as they can for as little money as they can. Many people like to take a cruise on a ship designed for that purpose, and the first time I did this, I was gravely disappointed. ‘Just a floating coach tour!’ I grumbled. The food was awful, and the entertainment worse. But, we did call at Rhodes and Santorini. At Rhodes, our friends met us, and took us around in their car. We seemed to visit most attractions at the best time … thirty minutes before the ‘hordes’ arrived from the ship!

Most cruises call at Santorini, even though they must always send their passengers ashore by tender, for only the smallest ships can moor at the quayside. On our first visit, we took a ride on the submarine out of Vlichada; an interesting experience, although most cruise operators prefer to keep their clients above the sea’s surface.

Sadly, the submarine is now gone from Santorini, and is, I believe, operating in the Canary Islands.

We were supposed to have ‘free time’ in Thera, but most of this time was spent queuing for the chairlift to take us back down to the harbour. And, we missed Santorini’s fabled sunset. By the time that happened, we were hull-down on the horizon, tucking into … roast beef and Yorkshire pudding.

I was wondering whether the sail on Samaria, when we finished walking the Samaria Gorge, on Crete, counted as a cruise. Ayia Roumeli, at the foot of the gorge, is inaccessible by road, so the ferries take you to Hora Sfakion or Souyia where you can catch a bus. But, I’ve just realised that Ayia Roumeli is on the southern coast of Crete, therefore not in the Aegean Sea. 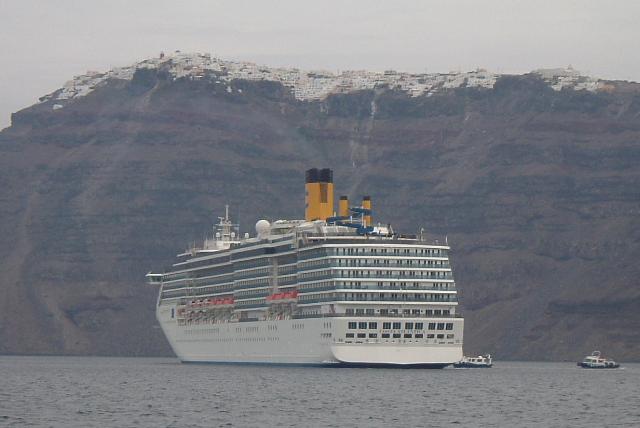 The next cruise in the Aegean was a complete contrast to the first. The Costa Atlantica is Italian owned and registered, therefore the food, the décor and the ambience were almost indescribably excellent. Although Santorini was the only Aegean port we called at, they allowed us much longer there. And, they laid on an excellent shore excursion for us. A kaiki picked us up from the ship to take us to the island of Nea Kamini, and we hiked up to the summit crater of that volcanic island, with an occasional glance over the shoulder to see the other passengers swarming up to Thera on donkeys. Or queuing for the cable car.

‘I hope that’s dust blowing from the crater’

I said. ‘No, Sir!’ said the guide ‘It’s steam!’ But, he went on to say that wasn’t a problem … and, if it was smoke, the nearest person to the boat would be the second person into it.

The Atlantica is a big ship, and, later, I asked one of the officers which other harbours they could use. ‘Rhodes and Piraeus are the only ones we can tie up at’ he told me ‘We also use Santorini, Patmos and Mykonos, but we anchor offshore at these places, and use tenders’ I asked about the Cretan ports, and he replied he didn’t know, because they never go there.

So, if you want to visit the smaller islands, you must use a smaller boat and, some years ago, I took a trip on a 50-foot sailing yacht with SeaScape Sailing. 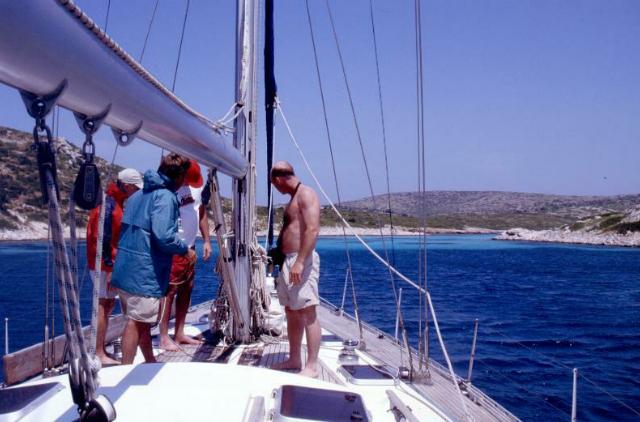 Contrary to popular belief, you don’t need to be an expert sailor to cruise on such a vessel. I was in the Air Force, which gave me a tendency to refer to the extremities of the ship as the ‘nose’ and the ‘tail’. But, nobody minded, and I was assured that I wouldn’t be aroused in the middle of the night to frammis the deadlights, or scupper the blinge spigot or something, for all nights were spent in port or at anchor.

We took at least one meal a day on shore, in a local taverna, which gave us a literal, as well as metaphorical ‘taste of the real Greece’ in locations such as Lipsi, Arki and Marathi, where the tourists rarely go. Generally, we followed the crew, for they knew all the best places to eat and drink.

In addition to these little islands, with their minuscule harbours and friendly tavernas, the crews know of hidden bays, where we could stop off for a swim. As we approached one of these, on the uninhabited island of Aspronissi, we were escorted to our anchorage by a pod of dolphins.

The itinerary is variable, guided by the weather conditions and the wishes of the passengers. The only fixed times are those of departure and arrival at Lakki, SeaScape’s home port. On the trip I took, we couldn’t make Agathonissi because of adverse winds, and therefore missed a meeting with George, the island’s famed ‘ouzo king’. But later, we called instead at Emborio, on Kalymnos, where even the crew hadn’t been before.

It’s not always an exercise in shunning the rest of the world, though. We made a call at Patmos, but, instead of the main harbour at Skala, we used the fishing port at Grykos. The crew pointed out two cats and a seagull, perched on a pile of nets on the pier. ‘They’re waiting for the Old Fisherman’ we were told ‘No matter how meagre his catch, he always has a fish for them’. Half an hour later, the Old Fisherman arrived, and, sure enough, his first action was to throw a fish to his friends. With an assortment of hired cars and scooters, we set off up the hill to the St. John Monastery and the Apocalypse Cave. ‘We won’t have breakfast’ said the crew ‘Wait till we get up the hill! Jimmy’s Balcony Restaurant makes superb omelettes!

They did indeed, and, from the balcony, there was a really good view of Skala Harbour. And, sailing into the harbour was a sailing clipper especially designed for cruising.

That’s something I would like to try, but haven’t done so yet. Several operators have sailing ships or motor cruisers, about 150 feet in length, accommodating less than 50 passengers. And, since they’re so small, they can go to places bigger ships can’t, but allow more space than a 50-foot yacht does.

The main objection comes from my wife, who doesn’t like the lack of a swimming pool on most of them. But, we’re sailing the Aegean; there are plenty of places where you can swim, and most operators allow for swim stops in their itinerary. So, I’m working on it! The sailboat cruise was in May, and we sailed most of the way ... everywhere except Agathonissi. We took a vote on that; we could have motored there, but most of the pax agreed that they had come to sail. Fortunately, as I said in the article, the schedules are fairly flexible, and we used the extra day to visit Emborio (Kalimnos) instead.

Also how was the wind when you sailed and what month was it?

your sailboat cruise sounds the best. I did one too but we got becalmed so we had to motor everywhere. The week before we sailed there were feroscious winds. Never can tell what weather will do. We enjoyed it anyway.