One of my favorite ways to travel while home in the States is to do some half-way planning, hop in the car, and hope for the best.  This is how my friend, Andy, and I took two and a half weeks of our summer in 2009.  We crammed two surfboards and what we thought would be enough clothing for two or so weeks in my Jeep.

We planned out our trip to be as cheap as possible so the first stop came from Andy’s acceptance as a guest at his mom’s high school reunion.  So that meant the first leg of the trip was going to be the longest and we headed straight for Atlantic Beach.  Atlantic Beach makes up part of the group of beaches just outside of Jacksonville, Florida (among these are Neptune Beach and Jax Beach).  This proved to be an interesting choice, to say the least. After driving 9 straight hours, and Andy driving the final 30 minutes, we arrived a little late to the first reunion party.  Standing at just over 5 and a half feet tall, I was dwarfed by my 6’6 travel companion; however, it did prove an unexpected conversation starter with the inebriated.  Andy was greeted with ‘you’re a tall mother f*#$%!’ or ‘what did they feed you’ or something to that effect.  It may have not been his height that really was the conversation starter after all- looking back on it I’d say it was the level of sobriety… I was greeted by an attractive older woman who kept referring to me as ‘jail bait’, multiple people kept walking in smelling of non-cigarette smoke, and the rest were listening to the former high school class-clown telling the crudest jokes I’ve ever heard.  The first night really set the pace for the entire week.

I quickly found out that if you went to school near the beach you more than likely spent more time smoking, drinking, and surfing than you did attending school in the 70’s.  So we spent most of the rest of the week pregaming and reliving the ‘glory days’ with the crazy reunion-ers before sneaking into bars.  On a side note, it is hard enough to sneak a short, quiet underager into a bar and it is nearly impossible to slip in the 6 foot 6 kid who seems to always find his way to the center of the party.  Seeing Andy running by bouncers and into a bathroom was funny enough, but the idea that Andy was hiding from bouncers in the bathroom with no actual plan probably made our first “bar night” the most entertaining event of that week.

On another note, away from the alcoholic tendencies that took place on the trip, the beaches here are some of the best I have experienced.  The wide, white beaches were spotless and offered a great place for Frisbee and football throwing as well as Bocce Ball.  The water was blue and clear; however, the waves were lacking, but what can you expect from the East Coast surf?  We liked Ragtime Bar and had a good time eat/listening to a band play at Caibbee Key.  Pete’s Bar was where Andy was trapped in the bathroom hiding from the bouncers.  All of these places are in a nice little area on Atlantic Boulevard and 1st street right next to the Sea Horse Ocean Front Inn. 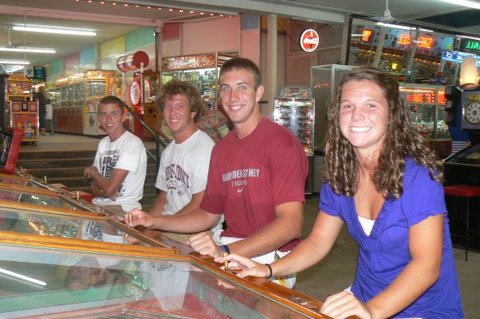 After spending a week with Andy’s family and partying with the older crowd, it was time to move on.  We traveled north to meet up with my family who rented a 6 bedroom house on the water at North Litchfield Beach, South Carolina.  The house wasn’t ready so we stayed for 3 days in our Myrtle beach house, located a mile off the beach and about 20 minutes away from Litchfield.  I love going to Myrtle beach because of the hustle and bustle of the city and beaches; there are some great bars here too along the water front and lots of arcades and little attractions for the younger ones(however, I’m not afraid to admit that I still find myself reliving childhood days in the arcades from time to time).  Among the bars, I prefer the open air Sharky’s as it is along the boardwalk. http://www.myrtlebeachhappyhour.com/index.html When the house was ready for us to move into, we met up with 3 other families and a few more of my friends in North Litchfield.  Litchfield is my favorite vacation spot as it offers great night life 20 minutes away in Myrtle Beach, and a quaint, neighborhood feel right on the beach.  Having about 15 college-goers on the beach all together is a lot of fun, and between the Bocce Ball playing, day drinking, and just hanging out in the warm, calm waters, we couldn’t have asked for a better time. Myrtle Beach, Litchfield, and Surfside areas of South Carolina are so attractive to families because of the relatively calm waters and wide beaches>>.  I am an avid surfer so it seems very contradictory that I am traveling to all these places without waves, but, to me, the beach’s sheer beauty and the aura that Litchfield exudes compromises the flatness of the water. Another week spent at the beach and it was time to move onto another place to travel, however, I was alone on this part of the trip.  I jumped on the next invitation, and a way to extend my trip, to Emerald Isle, North Carolina.  This was a bit different because of two reasons.  One, I was visiting an ex-girlfriend and two we were with her much stricter family.  The beaches here are nice, but don’t hold a candle to my previous two destinations.  Where the beach’s white sand was lacking, there were a lot of waves- somewhat choppy but I blame that on the windy conditions all week.  I definitely enjoyed the surf here despite the choppiness and the strong undertow; the skim boarding here was also pretty good.  Other than one night out for dinner, we didn’t even try to experience the lacking bar scene so I cannot comment on that.  After, rather stupidly, rekindling an old flame, I proceeded the last 252 miles back home.  18 days and roughly over 1,400 miles of driving I returned to home sweet home.