On New Year’s Day 1502, a Portuguese ship captained by one Gaspar de Lemos sailed into what is now Guanabera Bay. Thinking that this was the mouth of a river, they called it Rio de Janeiro,  ‘January River’, and, although there wasn’t actually a river here, the name stuck. Nowadays, it’s usually just shortened to ‘Rio’ … and, although there are many other places called Rio something or other … it’s usually assumed that you are talking about Rio de Janeiro.

Our hotel was only three blocks away from the famous Copacabana Beach, so of course we had to check it out. Our stroll along the long promenade was a bit harder than it sounds, because of the heat. I did have the idea of hiring a bike, and riding it along the promenade, so I could say I cycled on the same track as my heroes, the Brownlee brothers, did at the Olympics. But, on this January day, the walk was enough … with frequent stops for a sit down and a pull at the water bottle.

Rio claims to be the only city in the world with a jungle, mountains and a national park within its limits … there are probably other cities which have one or another, but I think they’re pretty safe with their claim of all three. The mountains aren’t all that high, but their slopes are steep … somewhat reminiscent of the forested stacks near Guilin, in China. And, they look pretty well unattainable without fathoms of rope and a collection of arcane ironmongery. I wasn’t up for that … although I may have been in bygone years, and in a more temperate climate. That, however, is not needed. The summit of the best-known one, Sugarloaf Mountain (Paõ de Açucar in Portuguese) is achievable by cable car. This, you may remember, was the ride that featured in Moonraker … but not as James Bond would have known it. There wasn’t a big guy on the roof trying to bite through the cable, for one thing, and anyway, they replaced the cars for the Olympics last year. But, at the halfway station, they have preserved one of the 'James Bond' cars, as well as one of the original cars from 1910.

The cable-car ride is a two-stage one, which lifts you up to give you a superb birds-eye view of the city. And, it's one the birds ...vultures and frigate birds ... enjoy too. 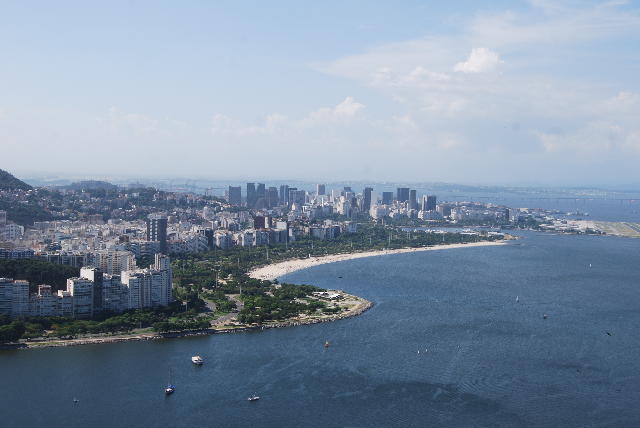 From the summit, there’s a view of another mountain, on the top of which stands a gigantic figure with outstretched arms. This is Christ the Redeemer, listed as one of the "Seven Wonders of the Modern World’. You can see this from just about anywhere in Rio … indeed, you could see it from the window of our hotel room …  but it has to be seen close up to be really appreciated.

It’s the work of several people, but one Heitor da Silva Costa is credited with the final design. It took nine years to build, being completed in 1931. It’s made from soapstone, which was imported from Sweden, and reinforced concrete. It stands 38 metres (125 feet) tall, and, within the plinth on which it stands, there’s a little chapel.

To get up close, you need to take a ride through the jungle on a rack and pinion railway, then take either an elevator or an escalator to the top of the mountain, where the gigantic statue stands. The railway actually predates the statue, and was used to carry the materials for it up the mountain. There were, in fact, one or two passengers for whom the rail ride seemed to be the main point of the trip, and the statue of secondary importance.

For me, the emphasis fell equally on the railway, the statue … and the views...