When it comes to Croatia, the balmy Dalmatian Coast along the Adriatic Sea, hogs most of the attention with loads of lovely spots such as Dubrovnik, Split, Zadar, Korčula, and Hvar. But the towns, beaches, and landscapes on the Adriatic north of here are also first rate, and though by now you've no doubt heard of most or all of the places I just mentioned, chances are the name Rijeka is new to you. But the country's largest port and third largest city (pop. around 129,000), capital of a western Croatian region called Gorski Kotar is also an appealing destination for its history/architecture, fun nightlife, cultural scene, and cool annual festivals. The last two items are going into overdrive in what should be a banner year for Rijeka, as it's been designated one of 2020's two annual European Capitals of Culture (the other being Galway, Ireland). Curious? Here's a peek.


Its roots dating back to a Celtic settlement first mentioned in the 1st century CE, evolving into the ancient Roman city Flumen, Rijeka was part of the Austro-Hungarian Empire from 1466 to 1918; then briefly became the free state of Fiume; until it fell under the rule of fascist Italy for 20 years. In the aftermath of World War II it passed to newly formed Yugoslavia in before finally ending up in independent Croatia in 1991. All this variegated history left it with a legacy of gracious architecture from Baroque to Art Nouveau (although much of it leans toward post-1750 thanks to an earthquake that year which took down many older buildings and monuments). 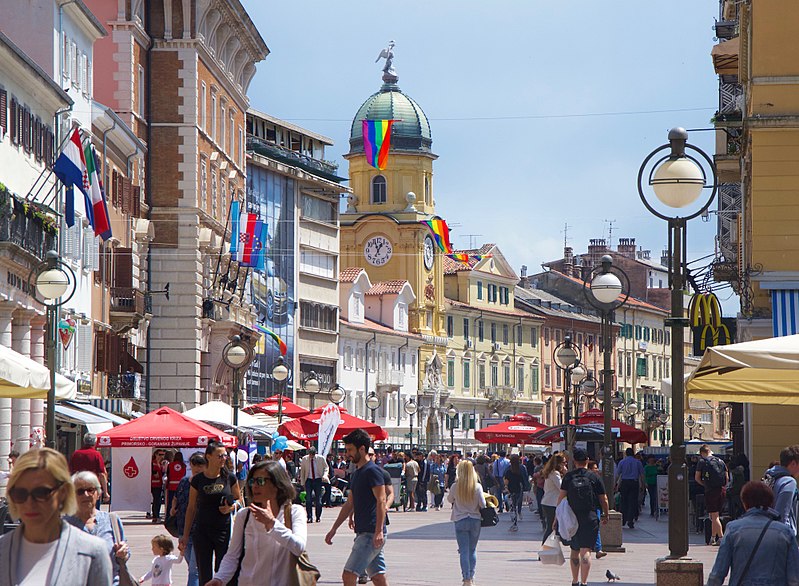 For example, you’ll spot many handsome Habsburg-era buildings along center city’s main boulevard Korzo, pedestrianized for some years now and lined with cafés and shops (the name derives from Fiumen, the local dialect of Venetian, since in the Middle Ages this like many settlements along this coast was strongly influenced by Venetian and Italian culture); the most distinctive landmark here is the 17th-century clock tower, which survived the earthquake and was once part of the old city gates. Near the tower is a simple, ancient stone arch that once marked the entrance to the ancient Roman fort that once stood here (there’s also a small site of excavated ruins here).

Another notable landmark, north of the arch, St. Vitus (above) is an unusual round Baroque church built by the Jesuits in 1638 which became the city’s cathedral just in 1969. Inside amid the marble pillars you’ll find a fine collection of paintings and other religious art, as well as gold work and rare books and prints.

From the Old City you can climb a 16th-century, 561-step stone votive staircase, lined with small chapels, up to Trsat Hill just above the city, where you’ll find Trsat Castle dating back to at least 1288 and modified in later centuries to include a neoclassical mausoleum and other structures. Besides offering great views over the city, surrounding valley, and Adriatic, it houses history and art exhibitions and serves as a warm-weather venue for open-air concerts, fashion shows, and other events. Nearby, the Shrine of Our Lady of Trsat complex, built in the late 13th century and home to a Baroque Franciscan church and monastery, is something of a pilgrimage site, especially for mariners, who come to pray to the Virgin Mary for protection at sea and venerate the Gothic sculpture of the Madonna of Slunj.

Speaking of the sea, down by the docks it’s always worth a meander through the colourful Velika Placa, a classic old-school covered market of 1880s vintage where locals browse for their dinner tables – and sometimes even eat dinner, in the food stalls and sit-down joints. Not far off stands the handsome, 135-year-old Hrvastko Narodno Kazaliste (Croatian National Theater, below), staging the city’s most prestigious drama, opera, ballet, and classical and other music performances.

Museums? But of course – one pair not to miss include the two-story Rijeka City Museum, which is a good place to get an overview of the life and times of this urb back to its early history. Alongside it, the Maritime & History Museum of the Croatian Coast occupying the 1890s neo-Renaissance Governor’s Palace expands that overview to the larger region and northwest Croatia (though unfortunately there’s not much explanation in English). Plus if you’re interested in getting a sense of local and national painting and sculpture, check out the Museum of Modern and Contemporary Art, a few blocks north of here.

And finally, this year the National Theater I mentioned will be one of the higher profile venues for the European Capital of Culture program cooked up by Rijeka 2020, with some 600 cultural and other events involving hundreds of institutions and organizations from Croatia and 40 other countries across the world. Striving to project the city as a "port of diversity", the organizers have established three themes for the occasion: water (as Rijeka has always been sea-oriented as well as rainier than average, and also focusing on the big picture: the ecological future of the oceans), work (especially in the post-industrial era), and migration (also critical to this city's history as well as a hot, extremely important topic in Europe and the world). And by the way, this city's known for its annual pre-Lenten Carnival, and this year's edition, which started this past Friday and runs through 26 February, is turning out to be even more exuberant, coinciding with Rijeka 2020. For more information and a program calendar, click here.