A Tale of Two Reds from the USA's West Coast 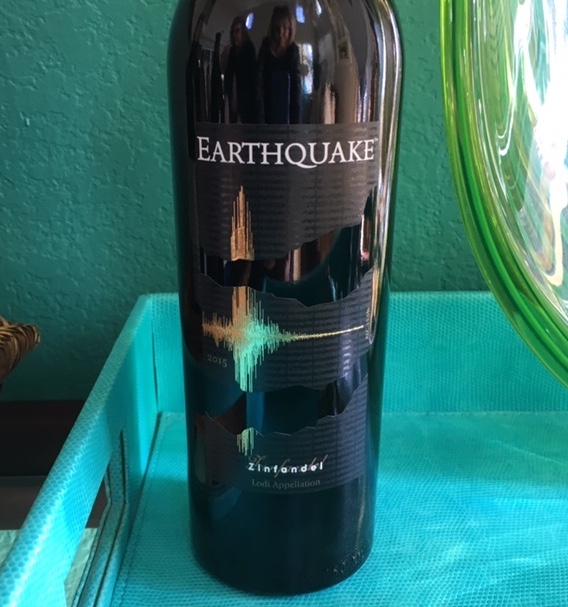 Fifth generation Lodi wine grape growers, Michael and David Philips, founded Michael David Winery 90 miles east of San Francisco, in 1984. This family-run winery uses sustainable farming practices and is known for its wine quality and humorous labels.  In 2002 they released 7 Deadly Zins, which used grapes from seven Lodi growers. The grapes used in making their Earthquake Zinfandel come from Lodi old vine zinfandel planted around the time of the San Francisco earthquake in 1906.  In 2018, Wine Enthusiast named their winemaker, Adam Mettler, its Winemaker of the Year.

Long thought to be a grapevine indigenous to America, genetic testing revealed that Zinfandel shares identical DNA with Italy’s Primitivo and Croatia’s Tribidrag.  Michael David’s Earthquake Zinfandel is a favorite of my daughter-in-law, Katie, who lives in Lodi.  She likes its “bold, fruity taste and peppery finish,” and appreciates its “dependable consistency from year to year.”  Although the color in the glass is a medium ruby red, I found rich aromas of ripe dark berries and peppery spice.  Old-vine grapes, oak fermentation, and an alcohol level of 15.5 percent contribute to the wine’s bold, assertive flavors of berry jam, dark cherry, and dried plum played against nuances of spice and smoke.  The finish gradually unfolds tastes of black pepper spice and hints of anise.  Our food pairing of mushrooms stuffed with Italian sausage and caramelized onions enhanced the wine’s savory depth.

Oregon’s Willamette Valley has recently designated its Van Duzer Corridor as a new Sub AVA.  Afternoon winds from the Pacific Ocean flow through an Oregon Coast Range passage, bringing cooling temperatures to the valley. Eric Eide, founder and winemaker at Aberrant Cellars, sources the Gamay Noir grapes from Havlin Vineyard in the Van Duzer Corridor.  Gamay Noir is related to Pinot Noir and shares some of its characteristics - light bodied, with cherry and berry fruit flavors.  Eide established the LUK label for Chardonnay, Cabernet Sauvignon, and Gamay Noir wines so that the Aberrant Cellars label could be limited to their Pinot Noir wine.  This Gamy Noir has aromas of berry fruit and subtle touches of charcoal. Flavors of blueberries and minerals came through and balanced the spiciness of the pairing of beanless chili topped with blue cheese.

Zin is one of my favorites. Thanks for the tip!