Today marks the 528th anniversary of the fall of Islamic Granada to the armies of King Ferdinand and Queen Isabella, marking the culmination of the Reconquista from the Moors - whose Umayyad Caliphate forces had swept into the Iberian Peninsula from North Africa in 711, overrunning the Visigothic kingdoms which had inherited the peninsula from Roman Hispania and establishing a European Islamic realm known as Al-Andalus, which ended up enduring for centuries. Here’s a quick and hugely simplified look at that complex, centuries-long process - sometimes tumultuous, sometimes relatively uneventful - which ended up defining the history and culture of Spain as we know it today.

Practically the only chunk of the peninsula never fully subjugated by the Umayyads was the Asturias region, up in the green north along the Bay of Biscay coast. Here the local Visigothic powers under a leader named Pelayo (above) defeated a Moorish force in 718 at the Battle of Covadonga, leading to the consolidation of the Kingdom of Asturias. The Asturians gradually expanded their domain over the next couple of centuries into Galicia, León, and Castile (and eventually, in 924, became the Kingdom of León). Meanwhile, after a failed offensive against the Moors in 778, the forces of Holy Roman Emperor Charlemagne took Barcelona from them in 801 and established control over territory from the Pyrenees Mountains down to the Ebro River.

But the ongoing "Reconquest" as such didn't really gather major forward momentum for two, even three centuries due to various reasons, including rivalries between and within various Christian kingdoms and fiefdoms; a resurgence in strength of Al-Andalus' ruling Córdoba Caliphate; and even a patchwork of shifting alliances between Christian and Muslim powers. To illustrate some of these shenanigans, one legendary, 11th-century Christian knight named Rodrigo Díaz de Vivar (above) - born in Burgos, founded in 884 in already Christian territory and better known as El Cid Campeador - eventually became a Spanish national folk hero, and subject of the epic medieval poem El Cantar del Mío Cid, thanks to his his fight against the Moors in Valencia, Granada, and elsewhere. Yet in 1080, court intrigue and other factors led to El Cid being exiled by his erstwhile boss Alfonso VI, king of Castile and León, whereupon he offered his military services to the Count of Barcelona - rejected - and ended up fighting for the Moorish emirs of Zaragoza until King Alfonso brought him back from exile by 1087. Just a tad confusing, eh? 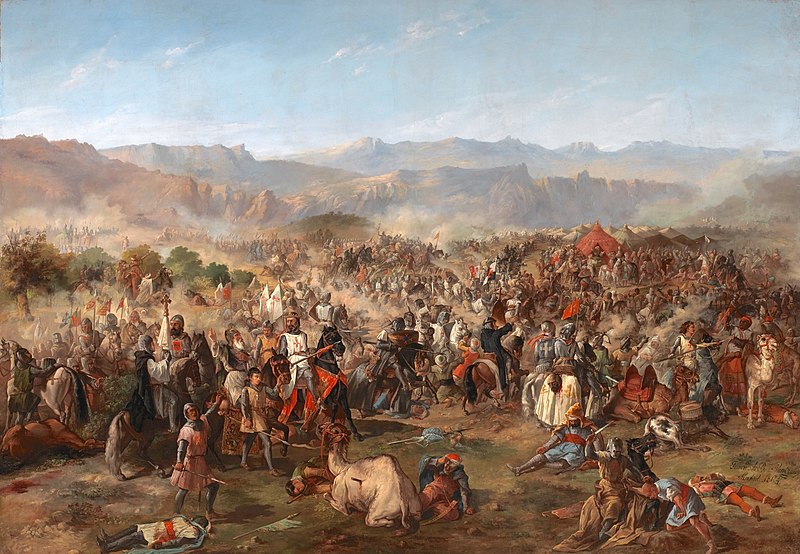 In any case, it wasn't until the 11th and 12th centuries when that forward momentum truly got rolling along in earnest, spurred by the growing fervour among the rulers of Europe for the Crusades (essentially a Christian jihad against Muslims in the Holy Land), as well as the splintering of the Caliphate into several dozen smaller, sometimes infighting taifa kingdoms. By 1085, when Toledo was taken by Castilian forces, over half of the Iberian peninsula was already under Christian sway. Zaragoza finally fell definitively to the army of King Alfonso I of Aragón in 1118, and in 1212, Alfonso VIII of Castile got Pope Innocent III to formally declare a Crusade against Al-Andalus in response to a powerful new Almoravid Muslim army crossing into Iberia. That same year, the Battle of Navas de Tolosa (above) in what is today the province of Jaén was a turning point in hastening the decline of Moorish rule, and the losses continued - for example, Cádiz (capital of the Caliphate of Córdoba) and Córdoba itself in 1236, Valencia in 1238, and Seville in 1248.

By 1249 the Emirate of Granada under the Nasrid dynasty was left as the last major territory of Al-Andalus - and furthermore it was a vassal state of Castile. But it was still another more than two centuries before the Reconquest entered its terminal phase, with an offensive under Ferdinand and Isabella in 1482 against Granada, finally ending with its surrender (above) on this very date, January 2, ten years later. And the story goes that the last sultan, Muhammad XII, better known to Spaniards as Boabdil, as he left in defeat stopped on a ridge for one last look back at his lost palaces and city and gave what became known as "the Moor's last sigh" - whereupon his amazingly unsympathetic mother told him scornfully, “Do not weep like a woman for what you could not defend like a man". Nice mom, eh?

And the Reconquista's tumultuous aftermath unleashed a flood of forced conversions and expulsions of both Muslims and Jews, along with repopulation of former Moorish territories by Christian settlers - and depending on how much of these territories was given to aristocratic families, this affected their development in succeeding centuries, sometimes leading to long-term destitution. One particularly infamous result of the Reconquista, the Spanish Inquisition (above), was established in 1478 to identify "heretics" among those who converted to Catholicism from Islam as well as Judaism. This persecution persisted for centuries; in 1609, even the descendants of Muslims who converted were expelled from Spain, and the Inquisition wasn't definitively abolished till 1834. Deeply traumatizing both socially and economically, it left an indelible mark on this country, the echoes of which can be felt even today. 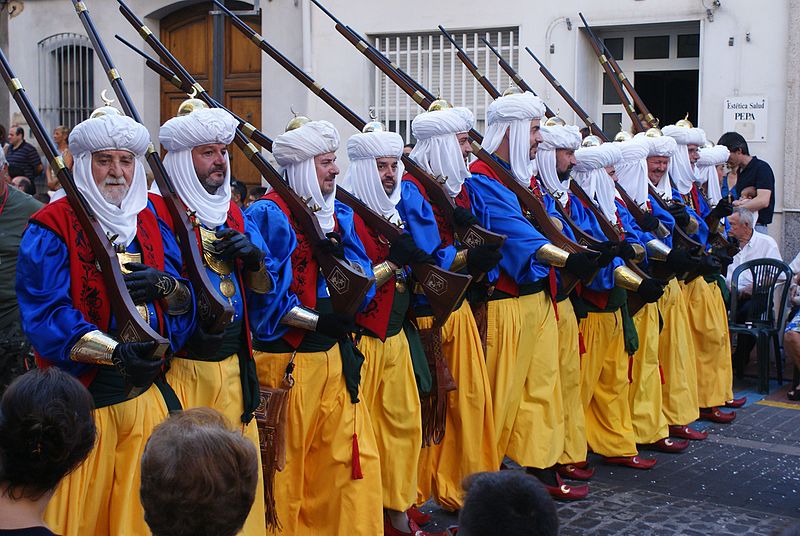 These days, a number of localities throughout the country - especially in Valencia, Murcia, and Jaén - hold annual Moros y Cristianos (Moors and Christians) festivals, parades, and pageants - a much jollier commemoration of what was then a serious and deadly business that forged much of the very history, culture, and identity of Spain.

Fun fact: As you travel around southern Spain, you may notice names of some towns end in the phrase "de la Frontera" (among the best known being Jerez de la Frontera in the province of Cádiz). That's because they were founded or renamed at a time when they were on the "frontera" (frontier) of Christian territory with that of shrinking Al-Andalus.