When Jim and Linda Onan built the house as a private residence for themselves and their four children, it was never intended to be a tourist attraction. Onan was long interested in pyramids and whatever power they might emit. Over the years he progressed from building small pyramids that sat atop the dining room table to a13 footer in his backyard to building his pyramid shaped house.

A scaled down replica at 1/9th the size of the Great Pyramid of Giza, the Onan pyramid is six stories tall and is surrounded by a moat – something you definitely won’t see in the sands of Egypt. When digging the foundation, they hit a spring that won’t stop flowing. Hence the moat. Some people (not the Onans) claim the water has special healing powers due to it coming from beneath a pyramid. It is pure and it is drinkable and bottling some of it is definitely in the plans. So is beer. Technically a barley wine, their beer is made from a recipe gleaned from analysis of the contents of a 4,000 year old bottle found in Egypt.

Oh, and did I  mention the 55 ft tall statue of Ramses just inside the front gate? It was built for the Onans by the same factory that builds many of the statues for Disney. 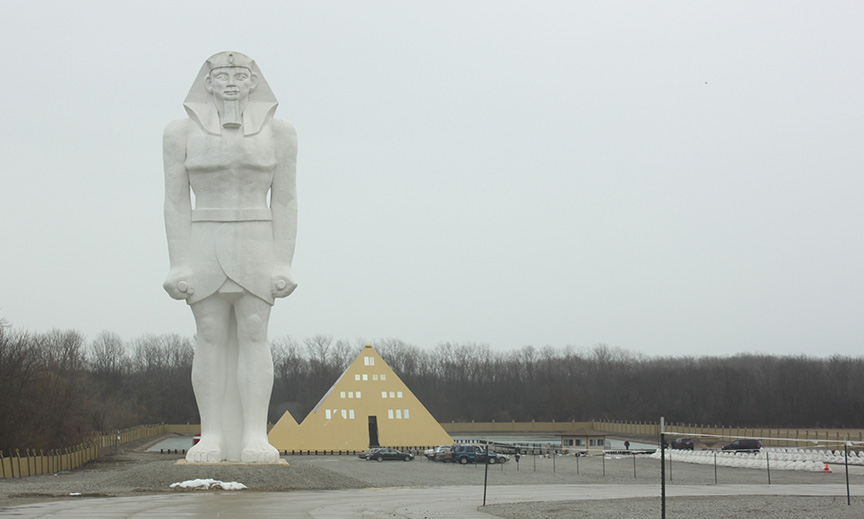 The tour of the house begins downstairs in the meeting room, where the walls have been professionally painted with scenes and hieroglyphics copied from those found in Egyptian tombs. The Onan's youngest son, Rocko, gives a delightful presentation on Egyptology, Pyramid Power and what it was like growing up in a pyramid.

A slide show takes visitors through the origins of the house and it’s metamorphosis over the years. At one time the outside was completely gold plated, earning it a place in the Guinness Book of Records as the largest 24-karat gold-plated object in North America.  Following the introduction, guests are led into an adjoining room filled with Egyptian artifacts, replicas and memorabilia. The family has made numerous trips to Egypt, at times as guests of the Egyptian government. The interior is 17,000 square feet, with five floors. Naturally, each floor as you go up gets narrower. Mrs. Onan graciously conducts guests through the main living area of the home.  She and her husband picked out the furnishings themselves and it is spectacularly decorated resulting in an elegant mix of comfort and opulence. 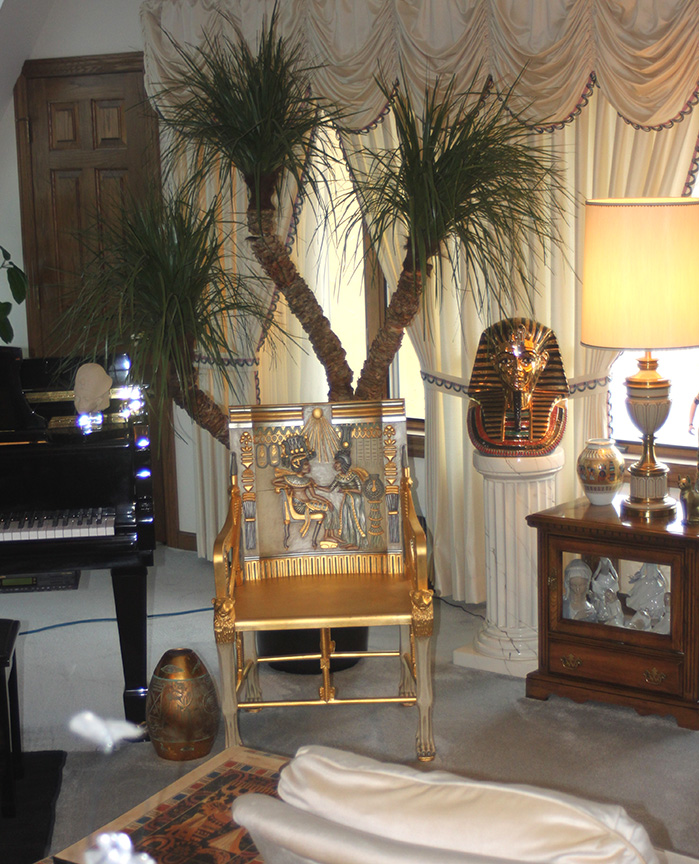 Stepping into the modern and spacious kitchen with it's country décor and touches of Americana is somewhat disorienting however. It looks like it belongs anywhere but in a pyramid!
Also on the property is a replica of the tomb of King Tutankhamen, complete with sarcophagus and 'mummy'. Filled with Egyptian replicas, it is indeed a second mini museum.
Another building houses a gift shop. Even the gift shop is worth stepping inside with a range of Egyptian souvenirs from t-shirts, bookmarks, and mini pyramids to ornate boxes, statuettes, jewelry and unique chess sets. If you are interested in being Cleopatra or another ancient Egyptian for Halloween, this is the place to find your complete outfit.

The visit to the Pyramid House was like a mini trip to the Land of the Pharaohs. I am sorry though that I didn’t ask for a sip of that ‘magical’ water. Couldn’t hurt. If you go: http://goldpyramid.com/   The pyramid is located in Wadsworth, IL. Check their website or facebook page for public tour dates and times. You can also book private tours for groups.  https://www.facebook.com/thegoldpyramid

As always, words and photos are my own, and require permission to reprint. However, feel free to share the blog in it's entirety. In fact, I encourage it!
Interested in photo prints? Contact me! maureenblevins@yahoo.com
See more photos at http://fineartamerica.com/profiles/1-mauverneen-blevins.html and visit my website, http://mauverneen.com.