Visitors to Peru’s Legendary Machu Picchu Need to Read This 
One of the world’s most romantic and dramatic ancient archaeological sites, Peru’s spectacularly sited “lost city of the Incas” (though in reality an elaborate estate of 15th-century Incan emperor Pachacutec) up in the Andes a three-hour train ride from Cuzco, has become so popular that in effect it’s being loved to death. With an average of more than 3,300 visitors per day in recent years, its hundreds of terraces, pathways, plazas, and buildings spread over 125 square miles (325 sq. kilometers) is South America’s most visited attraction. When I visited in 1978 and then again 20 years later, there was certainly no shortage of people, but in the 20 more years since my last visit, their numbers have gotten out of control - as has, as a result, damage and wear and tear on these structures as well as their surrounding ecosystem, with for example rampant trash, significant erosion, and pressure on some local species of flora and fauna.

By far the most visitors to Machu Picchu do this UNESCO World Heritage Site as a day trip,
and to avoid peak crowds (especially during peak season, May through September), until now the best advice has been to visit before and after the tour group and day-tripping hordes out of Cuzco descend upon the place, between around 11 am and 5:30 pm (this is why many experts recommend overnighting in or around Aguas Calientes, the town at the foot of MP). 
But as of July 1, the national government has reluctantly (because it makes millions on the explosion of tourism to this site) instituted a new set of rules designed to limit visitors and their impact on the site. Some of the most salient:

· Visitors must come in guided groups of no more than 20 people, sticking without deviation to one of three prescribed routes through the ruins, each 2½ to three hours long.

·  Visits must be arranged for morning or afternoon entrance times, with no unlimited time allowed at the site and even time limits (just three to five minutes!) to linger at particularly popular spots within the site.

·  Prohibitions on certain items brought in by visitors have been further tightened, such as no tripods, selfie sticks, umbrellas, or drones. 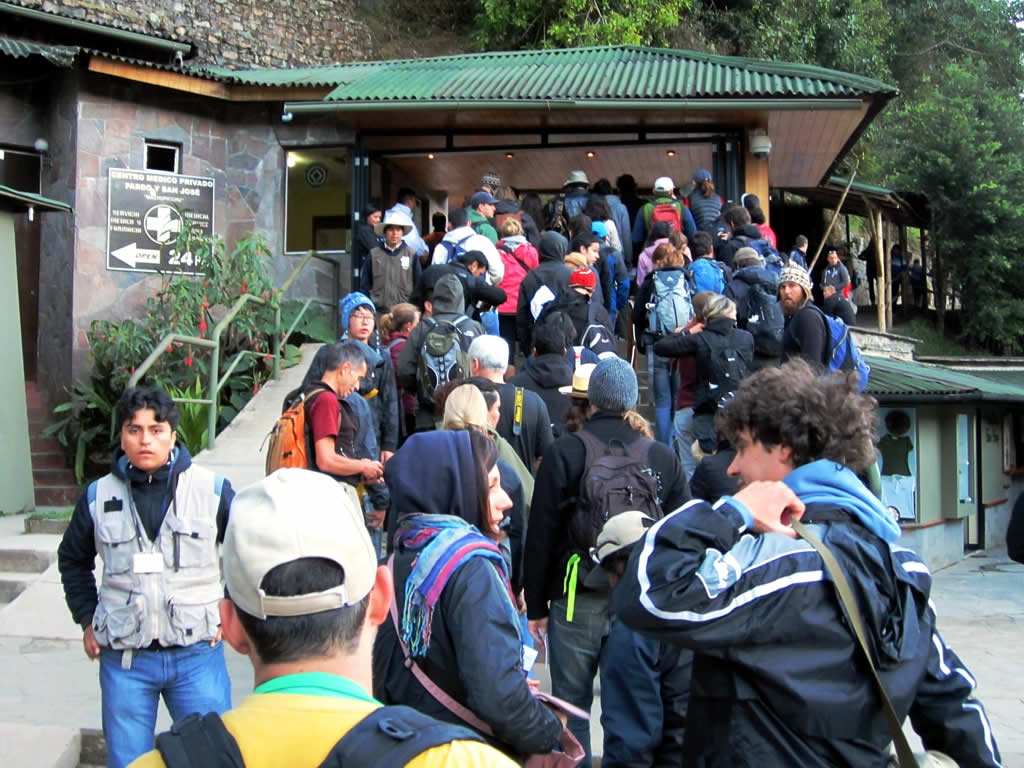 
A more detailed look at the new restrictions can be found here.

Yes, it’s truly sad that it’s come to this, and will detract from the feeling of spontaneity as well as "spirituality" that many visitors prize. And perhaps critics who say the new restrictions are too heavy handed, and that more enlightened, modern preservation and crowd-control techniques could've been applied. But on the other hand, both sponteneity and spirituality have already been heavily eroded by massive overcrowding anyway (nothing kills the former, for example, like long lines such as the ones for the solar observatory, above). Clearly something had to be done, or these priceless ruins would be well and truly ruined for real.

So no, it sure won't be the same, but you’ll still be overwhelmed by the majesty and surroundings of Machu Picchu, and that’s what counts.