(After the book Paris Movie Walks came out last year, I've discovered several more sites that I want to share with my readers. Inception is one of them. For others, feel free to read them in my official site.)

Just before Inception came out, when anything everybody had ever seen from it were a few clips and a print synopsis, it was hailed, even by journalists from serious newspapers as a masterpiece, a thinking man’s adventure entertainment, half reflection on the nature of human consciousness, half action flick.

They really should have known better because once the movie was actually released, this initial enthusiasm quickly evaporated. It was plain for all to see that the producers, inevitably unable to square this particular circle and, faced with the need to go for big-box-office schlock or philosophical profundity, had called in the guys from the pyrotechnics department.

The Guardian’s movie critic awarded it in the end three out of five stars, which was probably par for the course.

There is, however, one scene in the film that has survived the general disappointment to become almost iconic, and many more people than those who watched the actual movie will have seen it pop up in various places, from news footage to features about the latest movie technologies and even heavyweight documentaries about the workings of the human mind.

This scene, shot in Paris but engineered in London, is where Leonardo DiCaprio takes his young assistant – the girl whose role is to ask questions on behalf of a puzzled audience – to a street cafe inParis. Or does he? 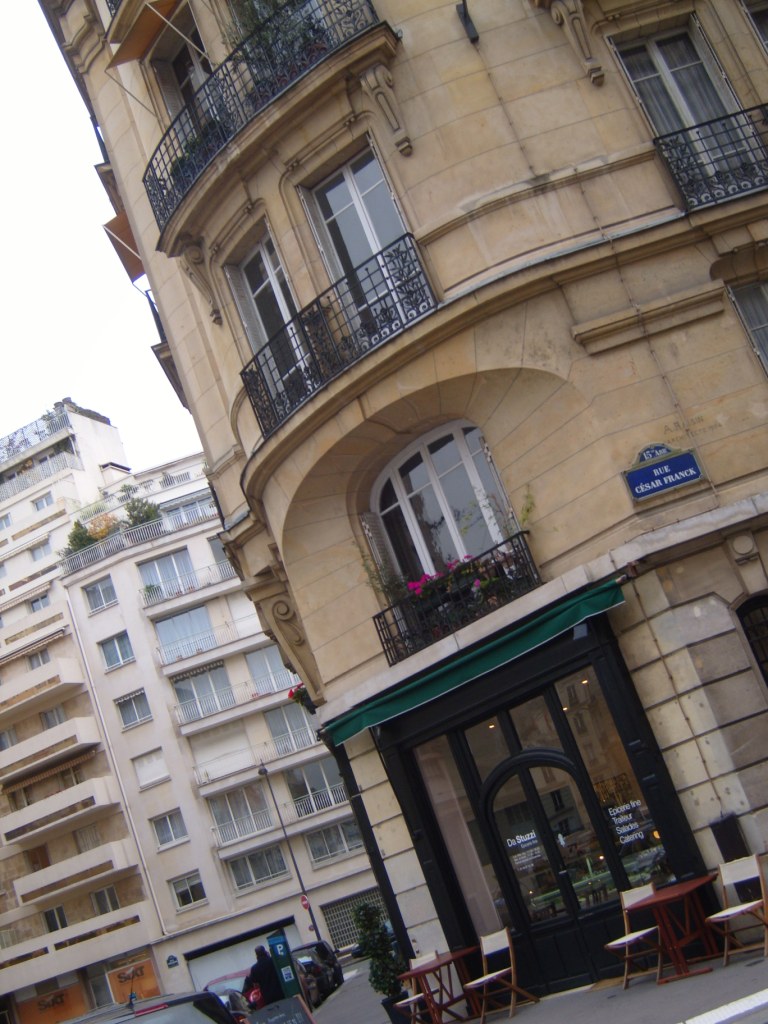 This “Café Debussy” – around which the whole city of Paris eventually begins to fold up as though it was made of papier-mâché – is actually located on the corner of Rue Bouchut and Rue Cesar Franck in the15th arrondissement, a few blocks south of the UNESCO building (Metro: Sevres Lecourbe).

In “reality”, however (please note the inverted commas: you can never be sure these days), the “Café Debussy” is an Italian corner deli that was converted by the filmmakers. (On Google Maps: Da Stuzzi or Italia Mia, 6 Rue César Franck, 75015 Paris, France.)

As though there were not enough street cafes in Paris. Ah, Hollywood. And while you are purchasing your salad or Italian bread: ask yourself whether you can remember how you actually got there. When you hear Edith Piaf singing Je Ne Regrette Rien, you can be sure your dream is nearly over.

Comment by Mary Ann Grisham on November 30, 2010 at 6:31pm
Wonderful book, Paris Movie Walks. I had the pleasure to take one of Michael's tours early this year of Montmarte and was delighted to see where many of my favorite movies were filmed, such as Amelie and Sabrina.