Not All Europe's Balmy Isles Are Mediterranean — Check Out Graciosa, Et Al

When it comes to sunny, water-surrounded getaways in Europe, for lots of us the Med pops right to mind — Spain’s Balearics, Sardinia, Cyprus, the Greek and Croatian isles, and so forth. But hundreds of miles out in the Atlantic from the Straits of Gilbraltar lie Madeira and the Azores, part of Portugal, which some Europeans (particularly the Brits) have taken a shine to over the generations, for various reasons starting with mild year-round temperatures — thanks to the Gulf Stream, they generally don’t drop below the low 50′s Fahrenheit (11°C) even in the dead of winter. Jolly good, indeed. 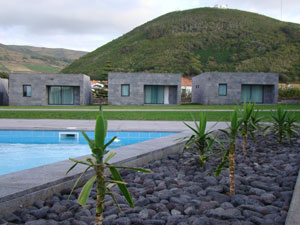 Yet still, they’ve got nothing quite like the go-go tourism over in the Mediterranean. Of the 20 islands, Madeira’s the best known, but several of the smaller, more laid-back of the Azores have been making a bid to take their under-the-radar tourism scene to the next level this coming summer season. A good example is Ilha da Graciosa, which in 2009 opened its first hotel above the level of a pensão (guesthouse). The 120-room, contemporary-flavored Graciosa Resort & Business Hotel (recent rates from 81€*) makes a comfy and affordable base for roaming two dozen square miles (61 sq. km) of fetching hills and coastlines, windmills, geysers, volcano craters, thermal spas, underground grottoes and lake, one small city (Santa Cruz) and three villages where you can soak up plenty of whitewashed charm and shop for handmade embroidery and linens as well as the island’s well-known wines, brandy, and cheese. There’s also diving; beaches; a nice, mild climate; and of course a vibe that’s laid-back and plenty graciosa (graceful). Finally, it’s no longer so remote; these days you can fly to the Azores not just via Lisbon but also directly from Boston, London, Amsterdam, Munich, and Frankfurt, on Azores Express SATA (though some of these are seasonal only).