Nem or Vietnamese Spring roll is one of Vietnam’s most well -known food. As the dish is quite complicated and time consuming hence in the old days Nem was made only occasionally during the important events like New Year holiday, family party, wedding… During such those events Nem became the main course of the party even decided for the quality of the party. Nowadays, Nem is a very popular dish which is on the menus of basic restaurant to the five star standard dining places. All of the Vietnamese restaurants serving the foreign tourists offer Nem as a traditional food.

Vietnam is long country with a slightly cultural difference and there is a certain variation in the cooking and recipe and even the name of the food. Nem is the name for the Northern region, Cha is what the Central region people call Nem while the Southern people call this Cha Gio. Ironically Cha and Gio are the totally different dishes in Vietnam, especially in the North. The recipe and ingredients include of varieties of components however there must be pork, black mushroom, aroma mushroom, egg, scallions, carrot, onions, bean sprouts and vermicelli. The pork must be from the pig shoulder or belly where there is a little fat that will enhance the taste of the Nem, the very lean pork is not preferred since it is too dried and tough after being fried. All ingredients need to be chopped small. Once all the ingredients are prepared, chopped pork, chopped mushrooms, onion, carrot… they are mixed up with eggs and you have a kind of paste. This paste is wrapped with soften rice paper, two to three tea spoon for one rice paper. After rolling, it just looks like a fat cigar! Traditionally, Vietnamese used pig fat for deep frying the Nem, nowadays vegetable oil is more popular to be used but some original Hanoian still use the pig fat to fry Nem. Making Nem is sophisticated enough but making dipping sauce for Nem is not less. The dipping sauce is always made from the fish sauce with high protein percentage. There are always five other spices ingredients in the dipping sauce like chopped garlic, chili, black pepper, lime, sugar. First, some water will be add into the fish sauce to reduce the salty, a tea spoon of sugar is dissolved in the sauce then some lime juice squeeze in to balance the flavors. Depends on own taste, you will add as much chili, more garlic into your own dipping sauce. To make the dipping sauce more eyed catching, some green papaya or carrot slices for dressing will help.

The Nem is often served with fresh vegetable like lettuce, mint and corianders. It is also served together with Bun Cha as an additional dish. 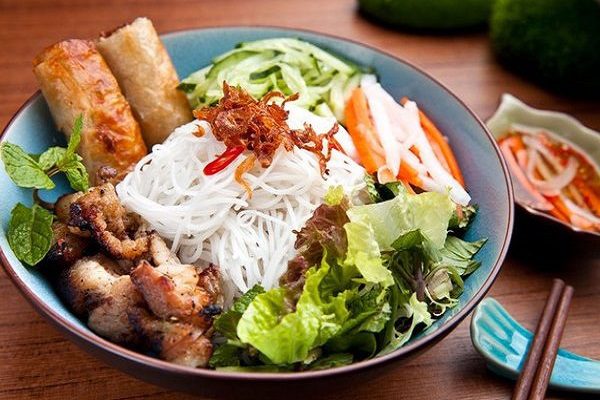