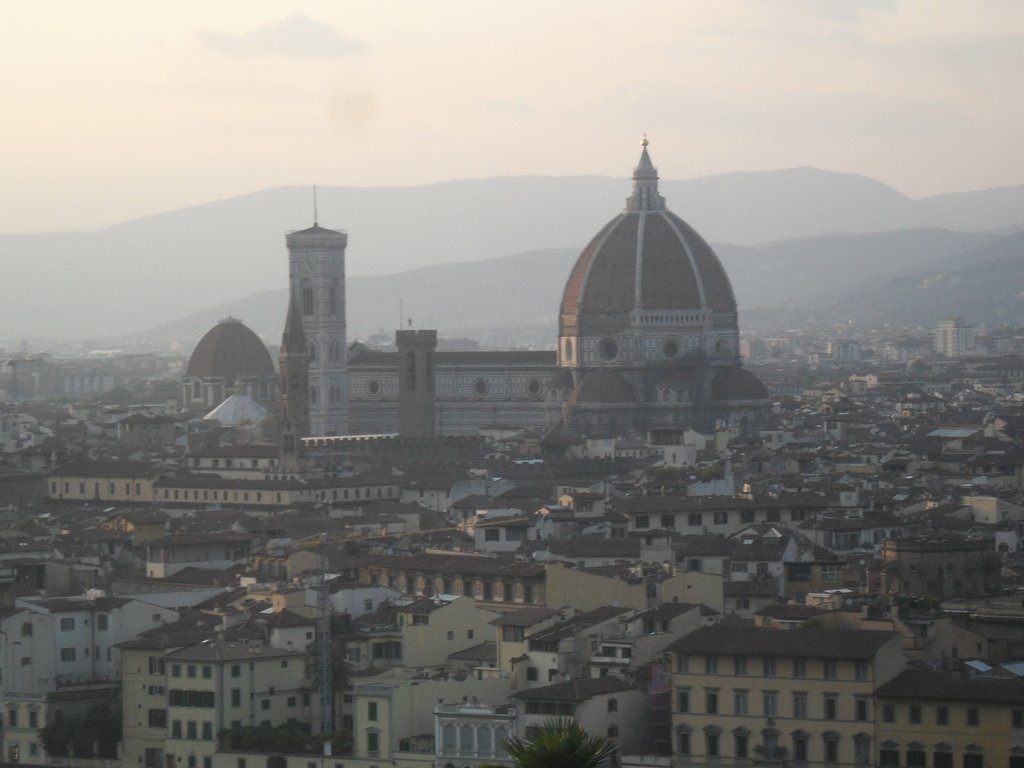 On this cool morning in southern Alabama with no European trip on the immediate horizon, I am wishing I was in Florence. It is strange to have fallen in love with a city that is so different from where I come from, which contains delights that I didn't even know existed a few years ago, but I guess the saying is true "you can't choose who (or what) you love."

Travel writers always seem so worldly, like they have always known about the world at large, where they wanted to visit and such, but they just haven't gotten the chance to reach the fulfillment of their knowledge until they visited these places. Perhaps I am projecting, but I feel like the complete opposite. I didn't care about tons of things until I traveled. And I bet there are still millions of experiences and places that I am currently closed off to and entirely unknowledgable of (Asia and South America come to mind). So, I am not ashamed to admit that I didn't really even know Florence existed until I stumbled across a Samantha Brown show a few years ago. All my life I had heard of Venice, Rome, and even knew the names of Naples and Milan, but for some reason, Florence wasn't on my radar. I had, of course, heard of the David, but had no idea where it might be and didn't really care. I knew of the Renaissance, but was still in the mindset where it didn't really matter to me where it started.

On that television special, Samantha actually seemed a little off her guard in Florence, commenting on problems she had with bathrooms among other things that we Americans tend to find disconcerting. I remember thinking that the Duomo looked pretty, but that Florence probably wasn't my kind of place. My Florentine education continued with a musical entitled "A Light in the Piazza" which I didn't actually see, but had the soundtrack for. It extolled the virtues of the city and highlighted the wonder that a young American woman felt by seeing statues of naked men (okay, and Renaissance architecture and art). Next came Rick Steves, with his detailed guidebooks and television specials. This is where I learned of the Uffizi Gallery and, again kind of shrugged because I have never been a fan of visual art. Paintings never really did it for me, and this museum just seemed to be chock full of them. Sure, there were some famous ones that I had seen in textbooks my whole life, but were they really that much better or more interesting in person? My final little introduction to Florence came from the movie," A Room With A View", which I fastforwarded through a bit on netflix instant view and got bored with, but thought that Florence, at the very least, looked interesting.

Fast forward a little to the time when we actually have a Mediterranean cruise booked, and La Spezia is on the itinerary. La Spezia happens to be about 2 1/2 hours from Florence, and is quite difficult to get there and back in one day on public transportation, so there was a hot second when we considered just touring the Cinque Terre that day, or perhaps Pisa. But, we shouldered on and decided to book the ship's bus shuttle to Florence: expensive, but we figured we would be kicking ourselves if we didn't go. I meticulously planned out those 4 hours that we would have in the city, so that we could see everything we planned on. Reservations for David were booked, restaurants highlighted on the map and tons of travel tips were packed in my brain. This was certainly not the most anticipated port stop; that was probabaly Rome with its immediately recognizable and famous places (athough I was still trying to keep straight whether it was the Pantheon or Parthenon that we would be seeing). No, in my mind, Florence was this "art city" with lots of designers like Gucci that I didn't care anything about and a pretty bridge. (By this time, I knew about the Ponte Vecchio from a History Channel special on the Medicis.)

Go a little further ahead in time, and we are on the cruise. In Barcelona I am AMAZED by the architecture. I knew I liked pretty buildings before, but Barcelona wowed me. I began to see architecture in an entirely new light. Then we go to Malta. And in a small chapel in a church in Malta, I finally saw art: Caraveggio to be specific, and it was glorious. I finally "got it" where visual art was concerned and couldn't wait to see more that moved me like that. In Naples, I discover my favorite form of visual art, sculpture, and revel in the delights of the Archaeology Museum. (I also discover my love for the Italian language on that day, but that is completely different blog.) Rome doesn't disappoint, and suddenly, it was our Florence day.

The day is dreary, and the two plus hour bus ride is endless, but somewhat interesting with the information from the guide. The initial impression of the city is slightly underwhelming as we come in on a street lined with businesses outside the old city. I spot a Blockbuster Video and a gas station. But, once James and I sprint away from the rest of the group and head toward Piazza della Signoria, we are soon enchanted by this city. I won't bore you with the details of what we did that day, (although I guess the point could be made that if you got this far, you don't care) but suffice to say, we fell in love. It rained for half of our precious time, and we didn't even see the Uffizi because we opted for other attractions, but it didn't matter. And you know what? I can't even really put into words why I loved/love Florence so much. (Which is somewhat of a problem due to the whole travel writer thing) But, here is what I can tell you.

1. Since our initial visit, we have returned for a multi-day trip and it lost none of its charm for us. We only loved it more.
2. The people are so warm and generous, especially considering that their city is overrun by bumbling tourists most of the time. (Daniela and Roberto, thank you so much for an authentic evening in Fiesole!)
3. The gelato is better here than anywhere else in Italy, and no one will convince me otherwise. Though I encourage you to try, as I love trying new gelato.
4. No where else immerses you in art like this city does. I feel my spirit constantly getting fed in Florence, just from what I see walking down the street (as corny as that sounds).
5. The food is crazy good, and relatively inexpensive. I never knew something that came out of a microwave could taste so good until I stopped at just a little enoteca, and tried some warmed up pasta with fresh Tuscan bread and olive oil. Seriously. Better than any Italian food I have had in the states.

I could go on, but I won't. I have trouble believing that any city will prove higher in my estimation than Florence. London came close, and Venice sure tried hard, but there is something about how my heart swells when I see that dome that I don't think can be replicated. Only thanks to travel could a little southern girl find her place halfway around the world.

Great blog. I agree though sometimes you know almost instantly if your going to like a city.Certain cities handle the mass of Tourism better than others.For me Paris has always been able to keep it's magic, even with  all the tourism. Now  Brugge and Brussels in my opinion have really suffered.