If you enjoy visiting art museums, Paris really is the place to go. In the last 20 years or so, Paris museums
re-organised their collections and the musée d'Orsay became the  receptacle for art dated between 1848 and 1914.

The building that houses the collection used to be a train station and hotel, which due to its proximity to the Louvre needed to be built sympathetically. Its inauguration in 1900 revealed a very fine building where the stone façade hid the metal structure inside. At the time, the painter Edouard Detaille wrote ""The station is superb and looks like a Palais des beaux-arts...". Little did he know that he was writing a prophesy.

After 1939, the progressive electrification of the railroads meant that the platforms were now too short to accommodate the new, longer electric trains, and the station was relegated to serving only the suburbs. The years that followed saw a number of uses for the station, from mailing centre for packages sent to prisoners during the second world war, to a film set (Kafka's 'The trial' by Orson Welles was filmed there). In 1978, the building was classified as a historic monument, and in 1986, François Mitterand, the then president of the Republic, inaugurated the new museum.

The work that was undertaken to turn this old railway station into a museum was extremely successful. What a stunning place! The outside is very much the way it must have been originally, but the inside area has
been turned into the most fantastic space for displaying art. Despite being shaped like a tunnel, the first thing you notice about the musée d'Orsay is the amount of natural light penetrating the building. 35,000
square metres of glass overhead and at either end allow light to flood the space. 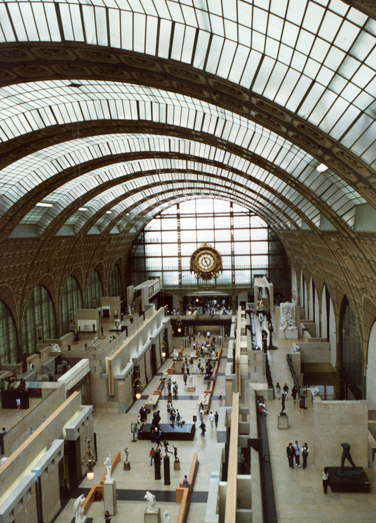 The museum is built over 3 levels. On the ground level, a nave the height of the building houses a number of sculptures. There are a number of rooms to the side of this.

Many features from the original building have been retained, and they are not the least appeal of the museum. I particularly liked the big clock (you can stand behind it and watch Paris through its glass). There
are also some wonderful stained-glass windows in one of the restaurants.

These features, being contemporary with the exhibits, serve as a wonderful backdrop.

The museum is open everyday (except Monday) from 9.30 am to 6.00 pm, with a later closing time of 9.45 pm on a Thursday. Entry to the museum costs 8 €, with a reduced tariff of 5.50€ for young people from 18 to
25 years old and on Sundays or after 4.15 pm. Entry is free for the under 18. Everyone can also get in free on the first Sunday of every  month, although I think it is worth paying the fee rather than facing the crowds that are bound to take advantage of this offer.

The museum building being fairly recent, it is fully accessible to those who have a disability, and guided visits in sign language are available. As always with major museums, try to get there as early as you can. The queues at the museum can be somewhat lengthy, but do not be put off by this, as once the museum opens, they move fairly quickly and efficiently.

The collections in the museum are presented by theme and in chronological order. The musée d'Orsay covers a period going from 1848 to 1914 and all major artistic movements are represented. The collection
is divided into 4 categories: painting, sculpture, architecture and decorative arts. The visit starts on the ground floor, then goes on to the top level and finishes on the middle floor. It is a good idea to visit in this order as you are then able to view the works in a more or less chronological order, but on the other hand, the end of the visit is home to some of the most popular exhibits, in particular some impressionist works, and can get very busy indeed by the afternoon.

If you want to do this museum justice, you will need to spend the best part of a day here. There are cafés where you can have a bite to eat, or if you want to do things in style, you could try the 'Restaurant du
Musée d'Orsay' which serves unpretentious cuisine in beautiful surroundings, with its impressive frescoes and mouldings.

The collection
This part of the review will have to be at best a brief overview as there are so many great works here, many of them being extremely famous.

Most of these are on the ground floor, where full advantage is taken of the changing light afforded by the glass vault. I have to say sculpture is not one of my favourite media, but there is much here to be admired.
Some of the sculptures exhibited were very scandalous when they were first shown to the public, such as the 'woman bitten by a snake', where the snake was only added as an afterthought, to hide the real reason for
the woman's languid pose Look out for Degas' young 14 year-old dancer on the top floor, which questioned accepted ideas of art and was described as ugly at the time.

This represents the bulk of the exhibits and there are some real gems to be seen here. Grouped by aesthetic currents, the visit gives you a real overview of art at the time. There really are too many paintings to mention, but some of my personal favourites included 'The Angelus' byJean-François Millet, some great Degas, Edouart Manet's 'The balcony', Dance at Le Moulin de la Galette, Montmartre by Renoir, and 'the siesta' and other Van Gogh paintings.

There are also exhibits on architecture and decorative arts and photography, with notably a photograph of Charles Baudelaire dating back to 1855.
Final thoughts

I really enjoyed visiting this museum, but found it a little much to take in over one day. As much as I enjoy art, I find that, after a while, tiredness and sensory overload combine to diminish my enjoyment of the works on offer. This meant that by the time I reached the end (the part I was most interested in), I was not as receptive as I should have been. This is a difficult one to solve, as I felt the order in which the visit was organised was really useful to help understanding how art evolved and the relationship between the different artistic movements. There is only one thing for it, I will have to visit again, this time going straight to my favourites I definitely recommend visiting the musée d'Orsay if you enjoy art or want to enjoy it.