A Terrific Tasting of Wines from Missouri I am a member of the Temecula (California) Wine Review Council, and at a recent council tasting of Missouri wines, I was surprised to learn that the first officially recognized American Viticultural Area (AVA) was Augusta, Missouri, dating back to 1980.  Located just west of St. Louis, along the Missouri River, August AVA has a silt-loam soil.  South of the river, Hermann AVA and Ozark Highlands AVA designations followed. Herman and Ozark Highlands are also a part of the Ozark Mountain AVA (consisting of vineyards in Missouri, Arkansas, and Oklahoma).

Missouri has a long history of winemaking, which began in the mid-1800s when German and Italian immigrants moved into the state and started growing wine grapes.  In the freat French wine blight of the late 1800s, when France lost many of its vineyards to the phylloxera louse, Missouri was able to help the French wine industry recover by sending them phylloxera resistant American rootstock, on which they could graft French grape cuttings.  Many grapes grown today in Missouri are hybrids, bred to withstand a cooler climate.

The wine council tasted six wines from five Missouri wineries.  We were quite impressed with their taste and quality.

Eight years after Augusta was designated the first American Viticultural Area (AVA), Tony Kooyumjian founded Augusta Winery.  The Traminette grape, bred to be cold-hardy, is an offspring of Gewurztraminer and Joannes Seyve and was developed by the University of Illinois and Cornell’s Agricultural Experiment Station. Its color in the glass is pale straw, and it has the familiar honeysuckle bouquet of a Gewurztraminer along with aromas of lychee, citrus, and stone fruit. This medium dry wine with citrus and peach flavors paired well with Mediterranean chicken endive spear shooters. 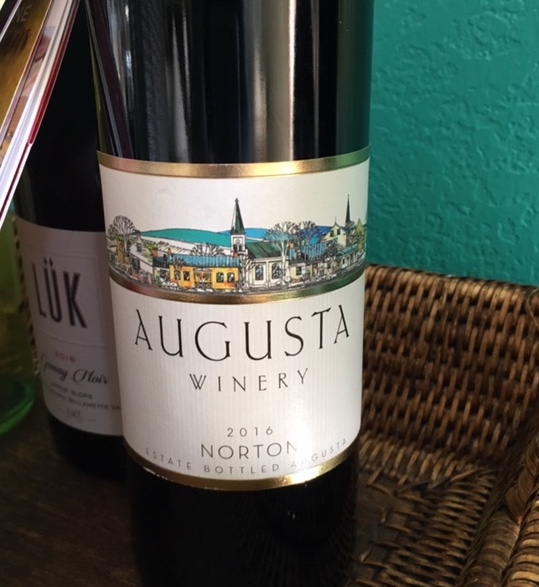 The wine council reviewed a second wine, Norton, from Augusta Winery.  Norton is Missouri’s official grape and is the namesake of Dr. Daniel Norton, who first cultivated the vines in Richmond, Virginia in the early 19th century.  Recent genetic tests have revealed that Norton shares identical genetic make-up with the American red grape, Cynthiana.  Aged in Missouri oak, Augusta’s 2016 Norton has a blackcurrant, dark cherry, and vanilla bouquet. This is a medium-bodied, dry wine, with flavors of dark berries, cassis, and chocolate. These flavors, along with an earthiness on the finish, were complemented by pairings of a rich, dill-encrusted Brie and a nutty cheddar cheese.

This Kansas City, Missouri production winery was established in 2014 in the Crossroads Arts District. and their grapes are Missouri sourced.  Chardonel is a late-ripening, cold-hardy hybrid grape, a cross of Seyval and Chardonnay. Fermented in stainless steel, this crisp white wine shares some of an un-oaked (sans chêne) Chardonnay’s characteristics – its golden color, its bright acidity, and it’s green-apple flavor with touches of minerality on the finish.  A honey goat cheese and pear in puff pastry was a nice balanced pairing and brought out the wine’s subtle pear flavors.

St. James Winery, established in 1970 by Jim and Pat Hofheer, is the fifth largest winery east of the Rocky Mountains.  Vignoles was originally thought to be a hybrid of Seibel (also a hybrid) and a clone of Pinot Noir, however, recent genetic testing has cast doubt on the grape’s origins. This is a dry version of the usually semi-sweet wine, with a deep golden color and a floral nose. With pineapple and apple flavors, and a crisp fruit finish, it paired well with the citrus and spice flavors of shrimp ceviche.

Robert and Lou Ann Nolan purchased the vineyard and planted grapes in 2005, and the first Nobeleis Vineyard wine was produced in 2010. Golden yellow in the glass, this fruit forward Vignoles wine is highly aromatic with notes of
pineapple and green apple, and flavors of the tropics.  The creamy, cheesy mac-and-cheese food pairing complemented the wine’s tropical flavors. 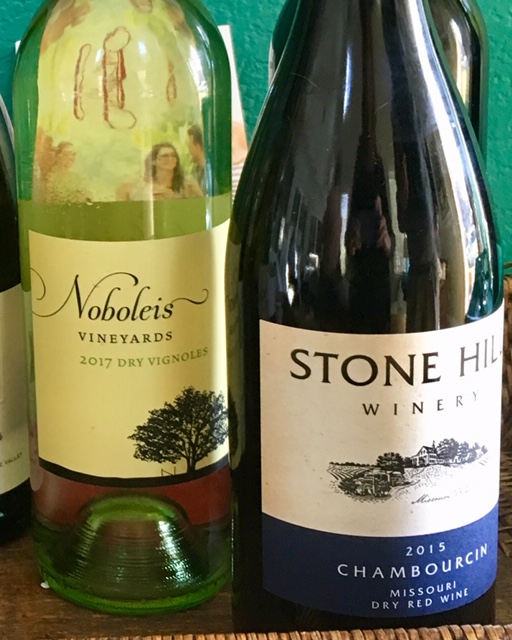 This Hermann winery, originally established by German immigrants in 1847, is the oldest winery in Missouri.  After becoming inoperative during Prohibition, it was restored in 1965 by Jim and Betty Held. Chambourcin is a French-American hybrid. Because this grape is a teinturier (both flesh and skins of the grape are dark), the color is a brilliant reddish purple. Berry aromas - boysenberry and blueberry - greet the nose. Dry and medium-bodied, the flavors are a balance of berries, acidity, and medium tannins. This wine stands up to a hearty dish or appetizer; the hamburger sliders paired with this wine were right on the money.