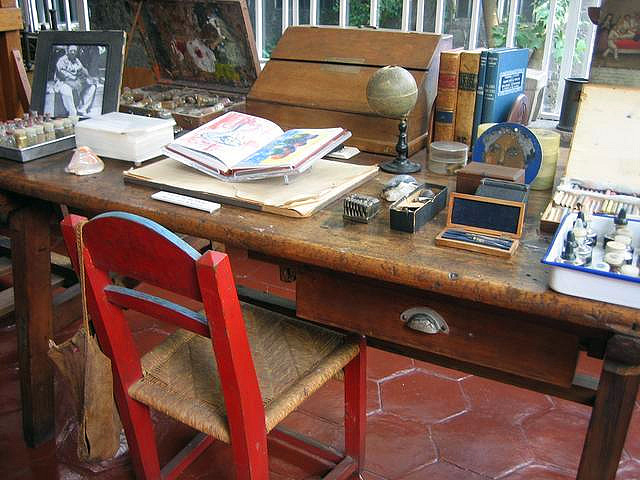 On our way to Central America, we arrived today in Mexico City, specifically the southern neighborhood of Coyoacán, which was once its own town. We’d been hoping to visit this very picturesque area of the city, as it’s the place where artist Frida Kahlo (1907-1954), known far and wide for her close-set eyebrows and loud, colorful dresses, lived and died. The Mexican poet, photographer and above all painter was also known for her realistic works. Though many would call her a surrealist, her canvases were truly the reflection of her very own tortured reality. In Coyoacán we can visit the sprawling house where she lived, which was transformed into the famous “Casa Azul” museum after her death. On display are many of her works, as well as those of her husband, the acclaimed muralist Diego Rivera, who continued to live in the same house even after their separation. If you’re not immediately planning to visit Mexico but would like to get a sneak preview of the museum, treat yourself to a virtual tour to learn about the artist’s daily life, her personal effects, where she painted and what served as the inspiration for her final poems.

When visiting the historical center of Mexico City, keep in mind that it was reconstructed from the former Aztec capital of Tenochtitlán. Imposing ruins of  the Aztec city, some as high as 200 feet (60 meters), can be found in the Templo Mayor adjacent to the cathedral, or in the museum of the same name.

In Constitution Square in the heart of the Federal District, you will find the monumental National Palace, the official seat of the Executive Branch. The Palace often receives foreign heads of state and hosts festivals and military parades celebrating the Mexican Revolution and Independence. Frida Kahlo’s husband was commissioned to create five murals in this very palace, on one of the floors and on the main staircase in commemoration of the Bicentennial of Mexican Independence. They were restored in 2009.

Truly, we can say without hesitation that when you visit Mexico, you cannot help but feel the presence of Frida Kahlo in just about every corner.

Your blog is great and is selected to put on Tripinfo.info